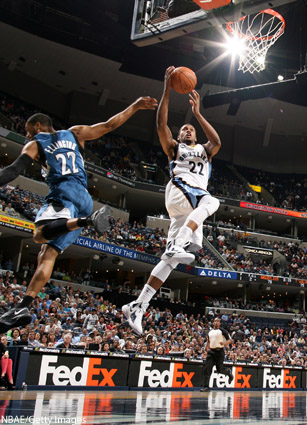 Good morning world! No time to waste, games on games from last night, so let’s get to it:

Remember Jodie Meeks? He’s been buried on the Sixers’ depth chart behind Evan Turner and Lou Williams, but thanks to an ailing knee for Andre Iguodala, Meeks got his second straight start—and this time, he made it count. The Kentucky product rained in 7 threes and finished with a career-high 31 points on just 16 shots to lead Philadelphia to a half-game lead over Boston in the Atlantic Division race. Jrue Holiday won the point guard battle, scoring 19 points and dishing out 6 assists, while ROY frontrunner Kyrie Irving struggled his way to 12 points on 4-13 shooting, plus 7 dimes and 5 turnovers. Irving settled for jumpers rather than attacking the lane, and it showed—the Sixers outscored the the Cavs 54-24 in the paint. Philly is now 13-2 when they score over 100 points, and 28-22 overall, while Cleveland has lost 7 of 8.

Josh Smith put on a 30-point, 18-rebound, 5-assist show in Milwaukee, but the Hawks turned the ball over 22 times—good for 25 Bucks points—and Monta Ellis scored 17 of his 33 points in the fourth quarter as Atlanta fell to 30-21 on the year. Even with DNPs for Ersan Ilyasova (back) and Carlos Delfino (groin), Milwaukee led by as many as 17 in the first half, and managed to move to within 2 games of New York for the No. 8 spot in the East. The Bucks held Joe Johnson to 4-14 shooting (11 points, 8 assists), while Brandon Jennings scored 18 points and Ellis had easily his best game since joining his new team. Even when the Hawks threatened late, the ex-Warrior drilled a 15-footer out of a timeout with 1:27 remaining in the game to give the Bucks a 6-point cushion—enough to seal the deal.

In a battle straight out of the animal kingdom, the Grizzlies got double-digit scoring nights from all five starters and Memphis has now won the last seven in a row against the Wolves. Rudy Gay scored 21 points, Dante Cunningham notched season-highs in points (13) and rebounds (14) in place of a banged-up Marc Gasol and Mareese Speights had 18 points on 8-11 shooting, as the Grizz survived another big night from Kevin Love, who racked up 28 points and 11 rebounds, plus 4 blocked shots. Memphis scored 22 fast break points and held Minnesota to 39 percent field goal shooting for the game. The Grizzlies are a half-game back of the Mavericks for the No. 5 spot in the Western Conference Playoff standings.

Dallas was down 19-6 to start the game, but Jason Terry scored 7 points in 60 seconds to spark a 16-2 third-quarter Mavericks run that put the Champs in front, and they came all the way back to improve to 19-8 at home with the win. Dirk Nowitzki scored 21 points, Terry finished with 12 and the Mavericks held the advantage at the free throw line (16-20 vs. 9-12) as Dallas beat Houston for the second time in four nights despite 22 points and 8 rebounds from Luis Scola, who dominated in the first half but saw double-teams for most of the last two quarters. Also, there was a Lamar Odom sighting! LO had 9 points, 4 rebounds and 3 assists in 23 minutes. Progress! With the loss, Houston drops out of the No. 8 spot in the West—but that will likely change from night to night at this point.

With 1:30 to play and the Suns trailing by 7 points with possession in hand, Phoenix’s optimistic play-by-play man offered, “the Suns are still alive!” The Suns promptly turned the ball over, then gave up an offensive rebound on the other end. And from there, San Antonio closed things out with ease, winning their 5th straight game and improving to 34-14 behind 26 points and 11 rebounds from Tim Duncan and 24 points and 7 assists from Tony Parker. Manu Ginobili racked up a 13-5-5 line off the bench while fellow reserve Stephen Jackson took the night off. (What is it with the Spurs and being able to sit whoever they want and still win?) Parker sparked a crucial 10-0 run early in the fourth quarter with 8 points on his own, and the Spurs won despite giving up a career-high 32 points to Shannon Brown, who started and played 42 minutes.

Oklahoma City jumped out to a 32-18 lead after one quarter of play and though the Blazers made a 17-2 run in the third quarter to close the gap, the Thunder had too much offense to compete with, cruising to their 4th straight W. Russell Westbrook scored 32 points, Kevin Durant had 25, James Harden had 21 and OKC shot 57 percent from the field—they are 17-0 when shooting 50 percent or better. Portland is now 3-4 since Nate McMillan was canned, and they’ve entered random-starting-lineup territory, last night featuring Nolan Smith’s first start (1-9 shooting, 3 points, 3 assists). JJ Hickson and LaMarcus Aldridge led the Blazers with 21 and 20 points respectively, while Jamal Crawford shot just 1-7 with 2 points and Raymond Felton was not with the team due to a family matter.

With 1:22 to play, David Lee scored on a left-handed flip against Pau Gasol, giving the Warriors their first lead of the game, 97-95. And then Kobe Bryant introduced himself to the game. After going 7-22 from the field up until that point, Kobe was 2-2 with the game on the line, drilling back-to-back tough (and so very Kobe-esque) jumpers with two defenders running at him to will the Lakers past frisky Golden State. Bryant finished with 30 points and Pau Gasol had 19 points and 17 rebounds—it was Andrew Bynum’s turn to be angry at Coach Mike Brown, since he sat in crunch time and played only 23 minutes after scoring 11 points on 4-13 shooting with only 5 rebounds. Then again, he randomly hoisted a three-pointer and repped Brick City at the free throw line. Bynum’s odd behavior aside, Los Angeles still dominated on the glass, outrebounding the Dubs 52 to 35. The Lake Show ruined an unusually sane performance from Golden State, who turned the ball over just 5 times and got 23 points apiece from Lee and Brandon Rush.

Line of the Night: Lots of 30+ point nights around the L, but how about this nugget on Kobe: he passed Michael Jordan for the second-most points ever with one NBA franchise, trailing only Karl Malone.

Moment of the Night: Jodie Meeks shows us what it looks like to be on fire.

Dunk of the Night: Rudy Gay with the nasty crossover and nastier finish.

Tonight: A 10-spot on Wednesday, including Magic-Knicks on ESPN, Chicago at Atlanta and Jazz-Celtics. I’ll be on Nets duty for NBA.com as they take on the Pacers in Jersey, so Eldon will be filling in. Don’t hurt him.