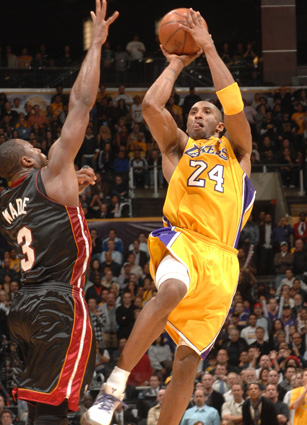 I know it’s Monday and we should probably talk about the games from last night, but really, did you think I would be able to start this without talking about Friday night. Kobe. Wade. Wade draped over Kobe, arm outscretched, Kobe falling to the left, heaving up a shot that I didn’t think he’d even be able to attempt before time expired, let alone bank in for the win…. Yeah.

That is why he is the best.

Best what? Simply the best. I don’t care about stats, numbers, who would or wouldn’t want him taking the last shot, first shot, game-winning shot, whatever shot, to me, he is just the best player in the league. Still. LeBron, Melo, Dwyane, fill-in-blank-here, you’re all really close, amazing, fantastic and I’m so thankful to get the privilege of watching you play, but there is only one and his name is Kobe.

I can’t even explain it except to say, if I was Kobe’s teammate and he looked over at me in a huddle and told me we were going to win the basketball game, independent of the situation, probability or even possibility of that happening, I’d trust him. I would believe in him. The reaction from Shannon Brown showed he believes something similar.

That shot had no business being close. It was perfect. One of the most exciting I’ve ever seen. Twitter makes these moments even better.

Hope most of you were able to catch it live. It was wild. Random Lakers note: my goodness, Pau Gasol and Andrew Bynum are really, really good. The game was also a great one and props go out to a Heat team that bounced back on the second night of a back to back after getting smoked by the Nuggets in Denver to come thisclose to stealing one from the Lakers. They bounced back from the loss in LA to grab the victory against the Kings last night, thanks to Dwyane’s pretty little line of 34 points, 10 assists, five rebounds and four blocked shots.

In the loss, Tyreke Evans was (again), pretty awesome. 30 points, on 10-for-19 shooting, four rebounds, four assists and three steals. The rookie is balling. In the Eastern Conference, Brandon Jennings and the Bucks are slumping and had an awful game against the Cavaliers (and by awful, I mean, it took them something crazy like 11 minutes of bball time to get from 17 points to 19. Yes, it was bad), but I’m hoping they get it back and we get a head-to-head battle between these two young stars, that’ll be one for the ages.

Speaking of the Cavs, someone needs to tell LeBron to save his moves for the dancefloor. Our guys Myles and Vince were discussing it over Twitter, and Myles had a great point: Can you picture Bron busting out those moves against the Celtics or Lakers? I’m sure Ron, Kobe, Sheed and KG would appreciate them much more than Noah did.

Since we’re talking about LeBron: The guy’s passing is prettier than ever and I love seeing him cheer for Delonte who had 21 points off of the bench, on 6-for-9 shooting.

Tonight. Is finally here. Allen Iverson is home in Philly and it’s all going to be going down live, on NBATV. I’m attempting to get this DVR of mine hooked up to record it. It’s only been sitting in a box by my TV since I moved into my apartment last October. Oops. I loathe hooking up electronics as much as I love basketball. That’s a lot.

I know I’m avoiding the Greg Oden news. I don’t have anything else to say. Or, I can’t say anything else without getting upset. I wrote about it for my blog over at TheScore.com, and that’s really all I have left inside of me, with respect to this situation. My heart is aching for the city of Portland and their amazing fans. I’m feeling for the entire Blazers organization, I’m thankful for the class, grace and genuine care they’ve shown for Oden and, of course, I’m sending positivity and love his way.

Congratulations to the Nets, for grabbing their first victory of the season and killing that nasty losing streak/start to the season. I was hoping they’d get victory number two in NYC yesterday, but as you can see from the game notes we’ve got posted, it didn’t happen.

Did you all see Chris Paul’s crazy-insane line from his return to the court on Friday night? In a victory over the TWolves, CP3 came back bigtime, scoring 16 points, dishing 15 assists, grabbing six boards, snagging eight steals and blocking a shot. Yeah. How does a guy return from an ankle injury to grab eight steals? The guy is special.

So tell me, what would you do if the clock was winding down in the third quarter and your opponenet decided to tuck the ball against their side, bend over and tie their shoes? If you’re Luol Deng, you’d shuffle back and forth watching, politely waiting for him to finish. #bullsfail.

Have a great Monday, everyone. Make sure you tune in to catch Allen’s return tonight.