LeBron James carries the Cavs to an overtime victory. 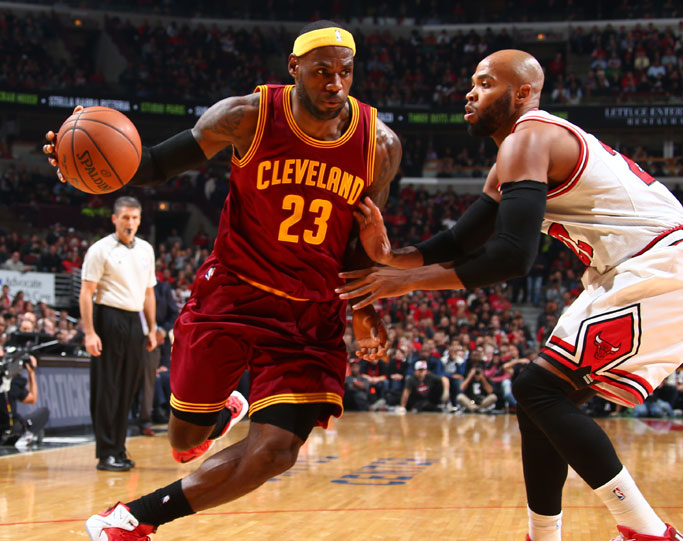 Zach Randolph (22 points, 13 rebounds, 3 steals) and Marc Gasol (20 points, 6 rebounds, 2 blocks) were at it again, incessantly pounding the ball down low right at Roy Hibbert (8 points, 8 rebounds). In the team’s first two wins, Randolph and Gasol have combined to average 49.6 points and 20.5 rebounds. If these two can stay healthy, their chemistry can take the Grizzlies a long way. Starting guards Mike Conley (17 points, 4 assists) and Courtney Lee (12 points, 16 minutes) also scored in double-figures for Memphis, as they only turned the ball over nine times. The Pacers, on the other hand, turned the ball over 18 times and struggled to find a source for offense–which will be a frequent problem this season. Chris Copeland (16 points, 6 rebounds) led the team in scoring, bit his team lacks a go-to guy. Indiana’s defense kept them in this game until the third quarter, when the Grizzlies outscored the Pacers 33-14.

This matchup showcased possibly the two best teams in the Eastern Conference, and it didn’t disappoint down to the final minute. After struggling in his season opener filled with emotion and pressure, LeBron James (36 points, 8 rebounds, 4 assists, 4 steals) finally seemed to settle back into his Cavs jersey and remind all of us why he is the best basketball player in the world. He scored eight of his 36 points in overtime. The King received plenty of help, though, as Kevin Love (16 points, 16 rebounds) notched another double-double while Tristan Thompson (16 points, 13 rebounds) set the Cavs’ franchise record for offensive rebounds in one game (12). Time and time again, Thompson came up with a crucial offensive board that allowed Cleveland to capitalize on a second-chance opportunity. The Bulls had seven guys in double-figures, led by Kirk Hinrich (20 points, 3-5 on 3-pointers) and Derrick Rose (20 points), who headed to the locker room in the fourth quarter after a sprained left ankle. Aaron Brooks (11 points) was serviceable but could only do so much when the game was on the line.

The rules of basketball say someone has to win this game. Milwaukee ended up pulling this one out, thanks to the resurgence of Larry Sanders (8 points, 15 rebounds, 2 steals, 4 blocks). There are lot of different opinions on how Sanders will bounce back after last season’s fiasco, but if Friday night was a sign of things to come, the Bucks might have their defensive center back. O.J. Mayo (25 points, 5 assists, 5-7 from the field) worked to get himself in shape this summer, and it has shown so far. The former No. 3 overall pick is averaging 21.0 points while shooting 60.9 percent from the field in his first two games. Besides Mayo, though, the Bucks didn’t get much from their bench. The Sixers…well, were the Sixers. Nerlens Noel (14 points, 10 rebounds, 3 blocks) posted his first NBA double-double while Tony Wroten (14 points, 6 assists, 8 turnovers) played out of control. Philadelphia shot 37.2 percent from the field, 21.7 percent from the 3-point line and 54.5 percent from the free throw line. It’s most likely going to be another long season for Sixers fans.

The reigning NBA Finals MVP made his season debut, but that didn’t matter for this electric Suns team. Isaiah Thomas (23 points, 10-17 from the field) already looks like a legitimate Sixth Man of the Year candidate as he guided the Suns to victory through the fourth quarter. With his team down 71-67 going into the final 12 minutes, IT knocked down back-to-back jumpers in the first few minutes. Then, over the final eight minutes, Thomas made three timely layups that either cut the deficit to a one-possession game or put the Suns in front. And during this time, Goran Dragic (10 points) and Eric Bledsoe (12 points, 9 rebounds) were also on the court. This three-headed scrappy point guard monster will be difficult for teams to handle as the season moves along. With Miles Plumlee (4 points, 4 rebounds) getting into foul trouble, Alex Len (10 points, 11 rebounds) posted a double-double and career highs in both categories. Kawhi Leonard (6 points, 8 rebounds, 0-5 from the field) still looked rusty in his first game and looks like he’ll need some time to find his touch. Tony Parker (19 points, 6 assists) led the Spurs in points and assists. San Antonio simply couldn’t buy a bucket late in this game, as the team’s final field goal came with 5:09 left in the game.

This game belonged to Rudy Gay (40 points, 8 rebounds, 13-19 from the field, 3-4 on 3-pointers, 11-13 on free throws), who put on one of his most dominating and efficient games since taking his talents to California. The small forward scored from behind the three-point line, at the free throw line and in the paint. Nicolas Batum (7 points, 5 rebounds, 5 assists), Wesley Matthews (16 points, 5 rebounds) and many other Blazers attempted to slow him down, but they failed for the most part. DeMarcus Cousins (17 points, 9 rebounds) played well in the paint as he, along with other Kings players, knocked down crucial free throws late in this one. For the game, Sacramento shot 31-35 (88.6 percent) from the free throw line. Damian Lillard (20 points, 7 rebounds) and LaMarcus Aldridge (22 points) both had solid games, but as has been the case since this core came together, the Blazers simply lack depth. This could hurt them in the long run.

The Lakers put up a valiant effort in this intercity battle, but the outcome we all expected came to fruition. Blake Griffin (39 points, 7 rebounds) showed his offensive prowess, giving viewers reason to believe he could be an MVP candidate yet again. Even with Griffin playing at such a high level, Byron Scott kept his Lakers in this game. After a Jeremy Lin (17 points, 9 assists, 3-6 on 3-pointers) 3-pointer with 4:39 left in the game, the Lakers actually led 106-103. Kobe Bryant (21 points, 7 assists) was getting his teammates involved while Jordan Hill (23 points, 5 rebounds) held his own with the Clippers bigs. But after such a respectable game, the Lakers fouled Jamal Crawford (22 points, 9-10 on free throws) shooting a 3-pointer, allowing the Clippers to tie the game, and it went downhill from there. Chris Paul (12 points, 10 assists) orchestrated the offense, picking up his first double-double of the season. Standing at 0-3, it doesn’t get any easier for the Lakers, as they face the Warriors Saturday followed by the Suns on Tuesday.