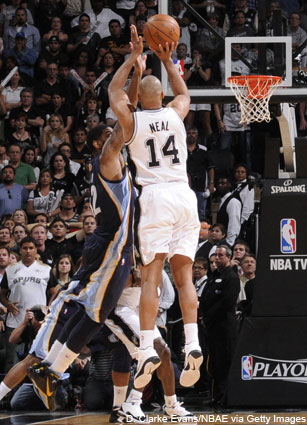 The Sixers made it interesting late, as they cut their deficit to 1 with less than 20 seconds remaining. But not only did Joel Anthony bring along his usual energy and intensity, he also sank two huge free throws to put Miami up three with 16.8 seconds left in regulation. The Sixers couldn’t get any closer, as an Iguodala jumper bricked off the iron with 10 seconds on the clock.

Dwyane Wade stuffed the stat sheet with 26 points, 11 rebounds, and 7 assists. LeBron James nearly had a triple-double with 16-10-8. Chris Bosh supplied a double-double with 22 and 11 rebounds.

Iguodala saved his best game of the series for last, as he chipped in 22 points, 10 rebounds, and 4 dimes. Sixers’ fans can only wonder if this series could have gone longer if Iguodala brought similar performances in the first three games. Elton Brand carried Philly at times as he added 22 points and 6 rebounds.

Heat coach, Erik Spoelstra, has clearly had enough with Zydrunas Ilgauskas and Mike Bibby as both players played less than 5 minutes each. For a championship contender, late April is not the best time to be figuring out the rotation. The Heat now move on to the Eastern Conference Semifinals to face the Boston Celtics. For the Sixers, an intriguing offseason awaits.—Cris Jones

The Spurs were dead. Done. End of an Era Bandwagon standing room only done. Then Neal hit that shot, that gloriously serrated dagger, and everything changed.

Suddenly the Grizzlies’ momentum doesn’t seem so daunting. Zach Randolph and Marc Gasol are obstacles, not impossibilities. Sam Young is on his way back to Earth. Mike Conley is no longer indefatigably obnoxious (just regular obnoxious).

The Grizzlies are mortal again.

San Antonio is still two wins away from survival, but after Neal’s shot anything is possible.

Coming back from 3-1 to win a series rarely happens. Then again, when’s the last time you saw an undrafted, 26-year-old rookie hit a fallaway three-pointer with 1.7 seconds left in the biggest game of his life?

That’s Hollywood stuff, but when it’s real, it makes you believe.

So throw out Memphis’ advantage inside. Throw out their waves upon waves of double digit scorers. Throw out Conley inexplicably outplaying Tony Parker. This series belongs to San Antonio again.

They’re old, injured and, let’s face it, more than a little overmatched, but the Spurs have “it” now. That thing that happens when you hit a Gary Neal shot. Momentum.

As unlikely as it sounds, they’re going to come back and win this series. Two straight wins, guaranteed.

Kevin Durant’s final 5:31 went a little something like this: 14-footer, 25-footer, 12-footer, 15-footer, 5-footer plus free throw, two more free throws, and then a 19-footer with 12 seconds left. In total, he scored 16 of Oklahoma City’s final 20, outscored the Nuggets by six over that stretch, finished with 41 and single-handedly created one of those this series ends here sequences reserved only for the game’s unmerciful closers.

With the Thunder down 9 and just over four minutes left, the series appeared to be fulfilling its destiny as a lengthy one, with a Game 6 beckoning and the Nuggets scratching together some long overdue momentum. Durant simply took over from there and OKC emerged with its first series victory since relocation.

For the record, Durant went 14-27 from the field to get his second 40-point effort of the series, especially encouraging considering his struggles in Denver. Russell Westbrook, fresh off the firestorm that was the reaction to his 30-shot game, went just 3-15 for his 14 points. Kendrick Perkins showed life on the offensive end to get 11.

Thus ends an interesting season for the Nuggets: once marred by rumor, enduring a trade that saw them farewell its two best players, before finding cohesion and balance post-trade with a group of very sound talent and depth. They have little to be ashamed of; outside of Game 2 their losing margins were 4, 3 and 3. They were right there.

Durant caps his first true defining moment with a trip to the second round, awaiting the result of San Antonio-Memphis. Like his team, he’ll be far from satisfied. —Todd Spehr