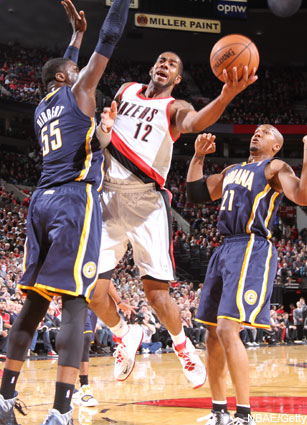 Incredible slate of hoops last night. Let’s start on the West coast with Rip City’s win at home over the now 16-2 Pacers.

Two of the NBA’s best went blow for blow last night in Portland. Indy grabbed an eight-point lead in the third quarter, but the Blazers bounced back with a 12-4 run to tie. Portland went up eight in the fourth with six minutes left, and quickly the Pacers had it back within four. Portland went up seven with 3:15 left, and a trio (yes, trio) of Paul George treys cut the lead to two 90 seconds later. And so it went…

Ultimately, the Blazers had the last word, as Nic Batum iced the game with a free throw in the waning seconds.

LaMarcus Aldridge led the Blazers in scoring with 28 and boards with 10 in WHAT I CANNOT STRESS ENOUGH WAS AN UNBELIEVABLY GREAT GAME BETWEEN TWO OF THE LEAGUE’S GREAT (AND YOUNGEST) TEAMS. Damian Lillard added 26, aided by his 10/10 shooting from the stripe. Wes Matthews kicked in 15 and Mo Williams added 13 off the bench.

George erupted for 43, including a ridiculous 7/15 from deep. He dropped 17 in the fourth quarter, including the aforementioned absurd sequence where he nailed threes on three consecutive possessions in the final minutes. Roy Hibbert double-doubled with 16 and 14 against the team he nearly signed with a couple of years ago, and George Hill handed out 11 assists. David West went for 12, 8 and 5, while Luis Scola and CJ Watson each added 10 off the bench in the loss.

Let’s jump to the fourth quarter, where the Spurs led 100-97 with 13 seconds to play after a pair of Manu Ginobili free throws. The Hawks ran an iso for Jeff Teague, and he drilled a three with 4.5 seconds left. But on the following possession, Manu hit Tim Duncan with a pass at the elbow and Duncan knocked down a game-winning jumper.

Duncan had a 20/ 20 night—23 and 21 with a pair of blocks, to be exact. Ginobili, Tony Parker, Tiago Splitter, Boris Diaw and Marco Belinelli all scored at least 10 in the W.

Each of Atlanta’s starters scored in double figures, including Teague, who led the way with 19. Paul Millsap double-doubled with 15 and 14. Amazingly, the Hawks attempted just 5 free throws but still hung in there until the final moments.

A battle between two teams playing without their respective superstars needed 62 minutes and 56 seconds to decide on Monday.

The Bulls held a one-point lead with Mike Dunleavy heading to the line in the final 20 seconds of regulation, but he only split his free throws, setting up a Jrue Holiday game-tying jumper to force overtime.

In the first OT, NOLA managed just three points in the first 4:50, but an Eric Gordon trey in the closing seconds knotted the game and forced a sixth period.

The Pelicans jumped out to a fast start in the second overtime, but let a 118-113 lead evaporate into a 122-122 tie after a Luol Deng bucket with a few seconds left in the period. To the third OT we go…

This one went back and forth, with a Joakim Noah deuce tying the game at 128 with four seconds left. But Jrue stepped up in the clutch again, taking advantage of a defensive lapse and converting a three-point play with two seconds left. Dunleavy got off a prayer at the buzzer, but couldn’t force a fourth OT.

Ryan Anderson was the star for New Orleans again, coming off of Sunday’s 31-point showing in New York. He dropped 36 on the Bulls, draining 7 threes and 5 free throws in a ridiculous 57 minutes of action. (Somehow, he managed zero assists, but we’ll cut him some slack.)

Gordon added 23, Holiday posted 19 and 12, and Jason Smith managed 12 points and 14 rebounds starting in place of Anthony Davis. Tyreke Evans came off the bench for 13 points and 5 fouls in 24 minutes, a pretty discouraging line considering the length of the game and extra run available with Davis down.

Whoa! The Jazz pretty much controlled this one throughout. They led by 13 after the first quarter, and maintained at least a tiny bit of separation through the entire fourth quarter.

Gordon Hayward led the charge in the upset win, scoring 29 on 12/18 shooting. Rookie Trey Burke added an impressive 21 with 6 dimes and 0 turnovers, and Alec Burks dropped 21 as well. Derrick Favors posted a big double-double: 14 & 13 with perfect shooting from the floor and the line.

Orlando doesn’t seem to play with a ton of energy on the road, where they’re now 1-6 this season (compared to a strong 5-5 at home). Last night, Washington pulled away in the second quarter and never looked back.

The Magic got 21 from Arron Afflalo and 16 from Mo Harkless, but not much from anybody else. Victor Oladipo shot just 4/12, though he did finish with 13 points and 6 rebounds. Big Baby and E’Twaun Moore each shot 1/8.

This season, I’ll be posting a semi-random highlight video of a former baller at the bottom of my Post Ups. Today, fast-break maestro-turned-potentially horrible coach Jason Kidd gets the spotlight.