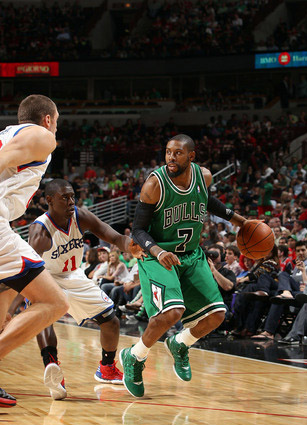 Hope everyone enjoyed their St. Patrick’s Day. While most of you were out partying, eight games went down…catch up on all the action below.

The Clippers are in a funk and although they won yesterday’s matinee game against Houston, it wasn’t pretty. The Rockets were playing with just nine healthy players and were missing starters Kevin Martin and Kyle Lowry and still almost pulled off the dub. With under three minutes the Rockets, led by Courtney’s Lee’s 25 points, were up six and looked like they were in control of the game. But Chris Paul, who finished with 23 points, 5 assists, and 5 steals, took over and scored ten straight points to give the Clips a 91-89 lead with 25 seconds remaining. CP3 also hit two clutch free throws with under four seconds left to make it a two possession game and seal the victory. The Rockets gave a valiant effort with their shorthanded roster but just didn’t have enough scoring power to get the job done. Patrick Patterson had 14 off the bench and held his own against Blake Griffin who finished with 18 points. Lob City needs to get things figured out and fast as the regular season is now in its final stages.

In a closely contested game, the Bobcats used an 11-0 run to gain the lead for the first time in the third quarter. The Bobcats were down by ten at the half, but outscored Toronto 38-14 in the quarter and carried that momentum into the fourth to take home a road victory. Gerald Henderson scored a team-high 24 points and D.J. Augustin had a 23-point, 11-assist performance in the win. Corey Maggette shot 3-11 from the field, but went 11-11 from the line for his 21 points; Maggette has now scored at least 20 points six times in the last nine games. Jerryd Bayless had 29 points and 6 assists one night after he dropped 28 against Memphis. Bayless is now averaging 21.8 over his last five games since being inserted into the starting lineup. I always felt that Bayless had the talent to be a productive point guard in the league and just needed time to develop; we may be seeing his ceiling now. If Ed Davis can continue to develop and Bargnani can stay healthy, they might have something brewing north of the border.

In the second game of a back-to-back, the Knicks beat up on the Pacers in Indianapolis. Indy cut it close in the fourth and at one point only trailed 77-76, but New York clamped down defensively (can’t believe I just typed that) and the Pacers only hit one field goal over the next eight minutes allowing the Knicks to pull away. Jeremy Lin led the Knicks with 19 points, 7 rebounds and 6 assists while STAT and Melo scored 16 apiece. The Pacers are now 4-6 since the All-Star break and need to right the ship. Roy Hibbert did all he could with 24 points and 12 boards and Darren Collison had 15, but the Pacers stumbled down the stretch and took themselves out of the game with their offensive inefficiency.

In a back-and-forth game that saw the Hornets outscore the Nets 32-12 in the fourth, Jarrett Jack, Chris Kaman and Marco Bellinelli each hit long jumpers in the final moments of the fourth quarter to will their team to victory. Jersey took a 12-point lead into the final period of play, but the Hornets weren’t fazed and they responded with a 6-0 run of their own to keep them in the game. Kaman and Bellinelli each finished with 20 points and Jarrett Jack put together a 16-point, 6-assist, 5-rebound performance. Gerald Wallace scored 11 points in his debut, Deron Williams had 20 and 12 assists and Anthony Morrow went 4-4 from beyond the arc to finish with 20 points.

Even though the Bulls have been plagued by injury all season, they keep trekking along and racking up wins. Last night, they were able to overcome a 14-point deficit with their best player on the bench and tally their 12th win in the last 14 games. Chicago got off to a rough start; they only scored 11 points and committed 8 turnovers in the first quarter. But after head coach Tom Thibodeau was slapped with a technical foul in the third quarter, the team came to life and immediately went on a 12-5 run. C.J. Watson scored half of his team-high 20 in the third and the Bulls used that momentum to propel them to victory. With Rose looking on from the sideline, Jrue Holiday ate up the Bulls backcourt to the tune of 30 points and 7 assists, but no other Sixer scored over ten points and they only shot 41 percent from the field as a team.

With starters Brendan Haywood and Shawn Marion both out due to injury, the Mavs rallied behind Dirk’s 27 and Jason Terry’s 8 fourth quarter points to take home the victory. The Mavs lead from wire to wire en route to their third straight victory. During the fourth, Dallas went on a 10-1 run that saw them get contributions from multiple players on the floor; Brandan Wright had a big dunk, Nowitzki and Jason Kidd hit back-to-back three’s, and Rodrigue Beaubois capped it off with a jumper that pushed the lead to 14. Kidd finished with his first double-double of the season with a 14-point, 10-assist performance; it was the 486th double-double of his career. Tim Duncan and Danny Green each had 17 for the Spurs, but the loss snapped their three-game winning streak.

Kenneith Faried had 18 points and a career-high 16 rebounds and Danilo Gallinari had 20 to help the Nuggets escape a Boston team that fought until the very end. The C’s cut a 17-point deficit down to two points in the fourth quarter, but Ty Lawson (10 assists) nailed a three to stretch the lead to five, then Faried grabbed two boards and threw down an alley-oop to make the score 94-87. KG and the Truth each had 22 points and Rajon Rondo dropped 12 and 16 dimes for the C’s who have now lost two in a row on their West Coast trip.

In a game that was decided in overtime, the Jazz scored the first six points of the extra period and blew the game open en route to a double-digit lead. Derrick Favors, who started for the injured Al Jefferson had a monster 23-point and career-high 17 rebound performance, while frontcourt mate Paul Millsap had a double-double of his own with 13 points and 12 boards. The Warriors shot a putrid 17 percent from the field in overtime and completely fell apart in the extra period. Nate Robinson scored 19-points off the bench to lead Golden State.

Stat Line of the Night:

Dunk of the Night: Blake with the monster dunk.