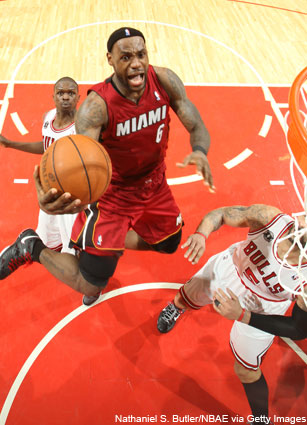 Game 2 started as if the Chicago Bulls were trying to put the Miami Heat away early. The Heat started out sluggish and the Bulls capitalized, getting the crowd involved early. Whether it was Luol Deng going coast-to-coast for a dunk, or making a buzzer beater to end the first quarter, Chicago looked as if they were clicking on all cylinders and it looked like it was going to be a long night for the South Beach boys.

But in the second quarter, LeBron James and Dwyane Wade took over and the 7-point lead that Chicago held at the end of the opening quarter turned into a 2-point lead for Miami going into halftime.

In the third quarter the Heat outscored Chicago 28-19, largely on the play of Udonis Haslem – seemingly having his own Brandon Roy Playoff moment – who saw extended minutes for the first time in the postseason. His energy was great as he hustled on the glass, hit open jumpers and dunked on anybody in his way. But regardless of how poorly the Bulls played and in spite of being down by 11-points at one point in the third, Miami was still unable to put any real distance between themselves and Chicago and the Bulls entered the fourth quarter with a 6-point lead.

In the final quarter the defense tightened up on both sides but Chicago still managed to go on a small run early to tie the game with just under 6 minutes left in regulation, shifting the momentum back toward the Bulls and putting the pressure on Miami to find a way to fight through adversity as the Heat went scoreless for over five minutes.

But Chicago then went into a four-minute cold spell of their own and Miami turned to LeBron James who led the team on 12-2 run (scoring 9 points himself) to which they never looked back and they’ve now evened the series at a game apiece. Game 2 was more indicative of close, grind it out type of game that many people expected to see in this series as opposed to the 21-point drubbing the Bulls put on the Miami in Game 1.

The Heat’s defense was suffocating, forcing the Bulls into a 34 percent shooting from the field and 15 percent from behind the three-point line. Derrick Rose, after playing very well in the first game, really struggled as the Miami D kept him out of the lane and forced him into a 7-23 shooting night. He also didn’t get much help from his supporting cast as Luol Deng was the only other starter in double-figure scoring with 13-points. Chicago did get solid bench production once again but Miami countered that with the play of the aforementioned Haslem who contributed 13 stellar points.

It was a must win game for the Heat and they went out and did what they had to do which was get a split in the Windy City. For Chicago, the series now transitions to South Beach for Game 3 on Sunday and has been their MO all season, the Bulls will be looking to bounce back from a sub par performance. – BryanCrawford / @_BryanCrawford