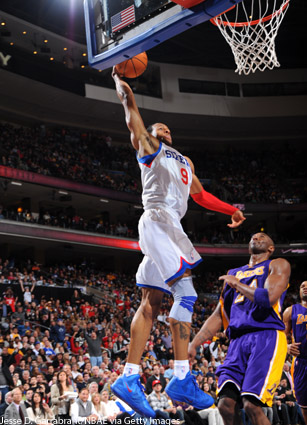 Usually it’s obvious which game from the previous night was the “best,” which one had the most intrigue, the best game-winning play of the best performance. Last night, it was impossible. It seemed like every game had something awesome going on. Even if, in New Jersey’s case for instance, it was only their fresh throwback unis. So interpret “The Takeover” however you want—it could be Jeremy Lin, the Sixers, Kobe’s big record, the Wizards getting a rare W, or a half-dozen other storylines. With that in mind, let’s get to it, starting with a great slate of early games.

Game one of a crazy night of hoops was a hell of a way to get things going. Kobe Bryant came out in his “hometown” looking like he was ready to send a message, scoring 24 points in the first half (28 overall) and passing former Laker teammate Shaquille O’Neal for No. 5 on the NBA’s all-time scoring list on a second-quarter jumper. But the Sixers didn’t care about history, taking a one-point lead into the fourth quarter and finishing the Lakers thanks to a monster final period on both ends of the court. Lou Williams scored 14 of his 24 points in the fourth, and Philadelphia stifled Kobe—holding him to 1-10 shooting in the quarter—to improve to 18-7 on the year. On top of KB’s record-setting night, Andrew Bynum had a ridiculous 20-20 game, Pau Gasol chipped in a 16×11 double-double, and Los Angeles outrebounded the Sixers 55-30. But the Lake Show went away from Bynum down the stretch and LouWill got his clutch on with a game-tying jumper and the go-ahead three-pointer to seal the victory for Philly. Jrue Holiday (who our own Tzvi Twersky pointed out is himself a shocking reminder of how long Kobe’s been around) added 13 points and 6 dimes for the Sixers, who host the Spurs and Clippers later this week.

When you’re a Washington Wizards/Lizards fan, you know that no lead is safe. Ever. Just ask Michael Ruffin. (Side note: I know exactly where I was when that happened, and I get physically ill watching the replays, to this day.) So when the Wiz went up by 18 points late in the third quarter, I knew it wouldn’t hold up—but, I was delighted at the chance to flip over to some of the night’s more entertaining matchups. As usual, DC allowed the Raptors to get back into the game, even without Andrea Bargnani, and had to take it to overtime to finish the Raps, who literally did not score one field goal in the extra frame (0-8 shooting). The Wizards now have 5 wins on the year, including 2 against Toronto and 2 against Charlotte (hey, I’ll take it). A confused Javale McGee provided the GIF of the night, and some of the stat lines from this game were otherwordly. For the Wiz, John Wall scored 31 points, plus had 5 rebounds and 7 assists, Nick Young dropped 29, and Linas Kleiza and Jerryd Bayless scored 30 each for the Raptors. Last thing: if the Wizards win a game but no one’s there to watch it, does it still count in the standings?

Chris Paul had 29 points, 8 assists and 7 rebounds as the Clippers overcame a 15-point deficit to send the game to overtime, and then outlasted the Magic to move to 15-7 on the season. Blake Griffin (18/10/3) could have wrapped things up in regulation by making his second of two free throws, but missed, before Jameer Nelson and Mo Williams traded would-be game-winning jumpers in the final seconds of the fourth. In overtime, the Clips got big buckets from Caron Butler, and Orlando’s Jason Richardson (20 points) couldn’t connect on a big three-ball before Paul and MoWill (who shot just 3-12 from the field, 9 points) salted the game away from the charity stripe. Griffin and Dwight Howard each had big-time finishes in this one, and Dwight put on a crazy 33-point, 14-board performance, but it was the Clips who won their sixth in seven games, while the Magic fell to 15-10.

Even after Derrick Rose left after playing only 11 minutes (4 points) with back spasms, which he claims are nothing to worry about, the Bulls rolled past the Nets behind 24 points from Carlos Boozer, 14 points and 11 assists from CJ Watson, and a crafty 9/12/5 line from Joakim Noah. Chicago shot 56 percent from the field as a team, had 29 assists combined and led wire to wire (by as many as 32). Other than the uniforms, there wasn’t much to cheer for as the home crowd in New Jersey, as they watched non-Deron Williams starters combine for 23 points, while DWill scored 25 himself (8-16 shooting). Even the next-highest scorers for the Nets had brutal shooting nights—Sundiata Gaints was 4-11 with 12 points and Jordan Farmar shot 5-14 with 11 points. Perhaps the biggest cheers came when Brian Scalabrine entered the game in the fourth quarter. Dude is a rock star everywhere he goes these days—it’s what the kids call swagger.

Linsanity has reached new heights. Another night, another career-best for former D-Leaguer and fan favorite Jeremy Lin, who scored 28 points and handed out 8 assists in his first career start. Lin, who now has 53 points over the Knicks’ last two games, played an incredible 45 minutes, and led New York to a victory over the Jazz (who dropped to 13-10) on a night when Amar’e Stoudemire was grieving the loss of his brother and Carmelo Anthony limped off the court after just six minutes of action. Lin’s shown no fear—actually, he looks like he’s loving life, and who wouldn’t be. (He’ll get his next chance to prove his point guard skills against John Wall on Wednesday.) For what it’s worth, Amar’e has three 25+ point games this season, while Lin now has 2. The weird didn’t end with Lin last night, though, as Steve Novak hit 5 (!) threes en route to a 19-point night and Jared Jeffries had 13 and 8. That’s right, the “Big Three” last night for the 10-15 Knicks? Lin, Novak and Jeffries, of course. The Jazz turned it over 20 times in the game, and were led by Al Jefferson’s 22 points. Paul Millsap had 13 boards but scored just 9 points on 3-10 shooting.

Today, Steve Nash turns 38. Last night, he posted a vintage Nash line, with 24 points (9-12 FGs, 4-4 3PTs), 11 assists and 4 rebounds, to lead the Suns past the Hawks. Nash helped Phoenix to 52 percent field goal shooting, and the Suns went on a 24-6 run to end the third quarter that blew the game open. The Suns (10-14) led by as many as 22, and held an 84-64 advantage at the end of three quarters. The Hawks (16-9) made one last comeback attempt behind Joe Johnson (17 points) and Josh Smith (18 points), forcing Nash and the rest of the Phoenix starters to get up off the bench with 4+ minutes to go and the lead cut to 11. But the Suns got a big three-pointer and one more bucket from Channing Frye, who finished with 19 points and 9 rebounds, and it was enough to hold off Atlanta. Up next for the Hawks are East foes Indiana, Orlando and Miami.

It seems like every night in this space I’m praising Tony Parker and Tim Duncan for playing their asses off (excuse my French, Tony). Parker scored 21 to go with 7 assists and Duncan racked up 19 points, 17 rebounds and 5 blocks as the Spurs beat the Grizzlies to get to 17-9 on the year. San Antonio held Memphis to just 11 fourth-quarter points, and forced the big scorers on the Grizz into terrible nights—Rudy Gay went for 18 points but shot 9-26 and OJ Mayo was 3-15 for 9 points. Marc Gasol scored 22 and Mike Conley put up a 19/6/8 line, but Memphis blew a six-point lead heading into a pitiful fourth quarter to fall to 12-13. The Spurs won their fifth straight game on the strength of Duncan at both ends—two of his blocked shots came at crucial moments down the stretch and 13 of his points came after halftime. And oh hey, a nice start to the annual “Rodeo Road Trip” for San Anton, which sees them play 9 straight road games including last night.

New Orleans just can’t buy a victory these days. The Hornets allowed an 18-point lead to evaporate, as the Kings won the fourth quarter 31-14, behind 11 of Tyreke Evans’ 20 points in the final period, dropping NOLA to a miserable 4-21 and 2-12 at home. DeMarcus Cousins was an absolute beast inside, racking up 28 points and 19 rebounds, and Sacramento got 17 points in 26 minutes off the bench from Isaiah Thomas, who is becoming more than just a sparkplug with his Jamal Crawford-ish ability to fill it up in a reserve role. On the bright side for NO, Greivis Vasquez continues to show signs of improvement for the Hornets (he had 20 points and 9 assists) and Chris Kaman is apparently back and willing to play despite the odd saga of his past few weeks—he had 10 points and 12 boards in 22 minutes. In fact, between Kaman’s production and 19 points from Emeka Okafor, the Hornets matched the Kings with 42 points in the paint for the game. But with Jarrett Jack nursing a sore knee, the Kings took home the W.

The biggest news coming out of this game (and I don’t just mean for my struggling fantasy team) was undoubtedly the injury to Danilo Gallinari, who will now be sidelined for a team that came into last night missing three normal starters. No Nene, no Afflalo, no Mozgov, and now no Gallo for Denver. Still, the Nuggets managed to shoot a decent percentage (44%), outrebound the Rockets 47-40, and score 50 points in the paint to just 32 for Houston. And yet, the Rockets won, thanks to 25 points from Luis Scola, 20 from Kyle Lowry, and 16 off the bench from Chase Budinger, who hit 5 threes. His last triple put the Rockets up 7 with a minute to play, locking in the win for H-Town, now a surprising 14-11. Of Denver’s six players to score in double figures, four were reserves, including 12 points and 15 rebounds from Al Harrington and a team-high 14 for Rudy Fernandez, who matched Gallo’s number before the starter was forced out of the game. Special shout out required to Kenneth Faried, who I had the pleasure of working with for an IYF in SLAM 155—in his first NBA start, The Manimal had 8 rebounds, 6 points and 1 blocked shot in 18 minutes.

Was it a block? Was it a goaltend? We may never know for sure, but the video looks pretty darn convincing in the “that was clean” department. Either way you slice it, the refs gave Kevin Durant and the Thunder the bucket, sending this thriller to overtime, where OKC outscored Portland 8-4 to escape the Rose Garden with the win—only the Blazers’ second home loss of the season. Kevin Durant dunked home the last of his 33 points with less than 5 seconds to play in OT to seal the victory for Oklahoma City (19-5). Russell Westbrook added a 28/11/8 line, James Harden had 19 and OKC won the rebounding battle 59-39, but most importantly, the Thunder survived. They survived having to deal with Blazer big LaMarcus Aldridge all night long, as LMA continued to put the League on notice, scoring 39 points and looking unstoppable at times. Jamal Crawford (17 points) got the starting nod for the first time this year for Portland, since Ray Felton was injured and not playing, and Wes Matthews (18 points) and Marcus Camby (8 points, 15 rebounds) delivered nice nights for the Blazers (14-11) in the loss.

Moment of the Night: This friggin’ guy…

Kobe of the Night: Kobe doin’ work—passes Shaq for 5th on the all-time scoring list.

Dunk of the Night: Jeff Teague on Channing Frye and the Suns.

Awkward of the Night: Aw, the Nets love each other. Or something.

Tonight: Six games going on tonight, highlighted by Jazz at Pacers—the only matchup that pits two teams with winning records against one another. On entertainment value alone, Kings at Timberwolves and Thunder at Warriors should be worth watching. Plus, Kyrie Irving and the Cavs are in Miami, where last time they met, the Heat won behind 35 points from Chris Bosh (not LeBron).