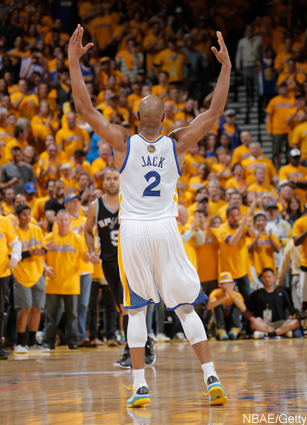 When a fight commences, you’re either committed to it or you’re not. If you go into a fight half-stepping, you’re sure to lose (with a new black eye or two). But if you’re committed to the fight, then dealing with a body blow (a compromised Stephen Curry ankle for example) or an unexpected counter hook (early foul trouble for the Warriors bigs) is just part of the process.

The Golden State Warriors overcame many a body blow and counter hooks on Sunday afternoon as their 97-87 victory over the San Antonio Spurs not only evened the series 2-2, but they also hit the Spurs with punches they probably didn’t see coming in the form of Harrison Barnes and Jarrett Jack.

The usage of Barnes was key for Golden State as Curry wasn’t at 100 percent on the court. Barnes came out like a young fighter who eagerly just wanted to hit the target. Sure, maybe not all of the punches would connect (Barnes shot just 9-26 from the field) but all of that output has an effect on the opponent. The Spurs became weary, they did things they don’t normally do (like keeping a 6-4 Gary Neal on a 6-8 Barnes) and they left themselves exposed. Barnes’ youthful energy and assertiveness paid off, as his 26 points and 10 rebounds anchored a Warriors attack that needed a boost. Jarrett Jack’s 22 points proved to be timely scoring punch needed, especially in the fourth quarter, as he became the Dubs main guy to create something 1-on-1.

The Spurs, who had led throughout much of the game, saw their lead dissipate in the second half in way that we’re  not accustomed to seeing. Poor shot selection, missed free throws, lapses on defense, the Spurs looked like what we’d expect the Warriors to look like in this scenario—young and inexperienced, rattled by the raucous home crowd.

“We put ourselves in a position to win the game and it’s frustrating because we feel like we gave it away.” —Spurs forward Tim Duncan

The Spurs would score just 15 points in the last 13 minutes of regulation plus the overtime period. Spurs head coach Gregg Popovich could only sit on the bench and stare off into wonderland, wondering where his team that played so masterfully on Friday evening went, and who this group of guys that played to such a substandard level on Sunday afternoon was.—Eduardo Maisonet, III / @edthesportsfan