Post Up: Trae Young Drops 49 Points, But Hawks Succumb to Pacers in OT 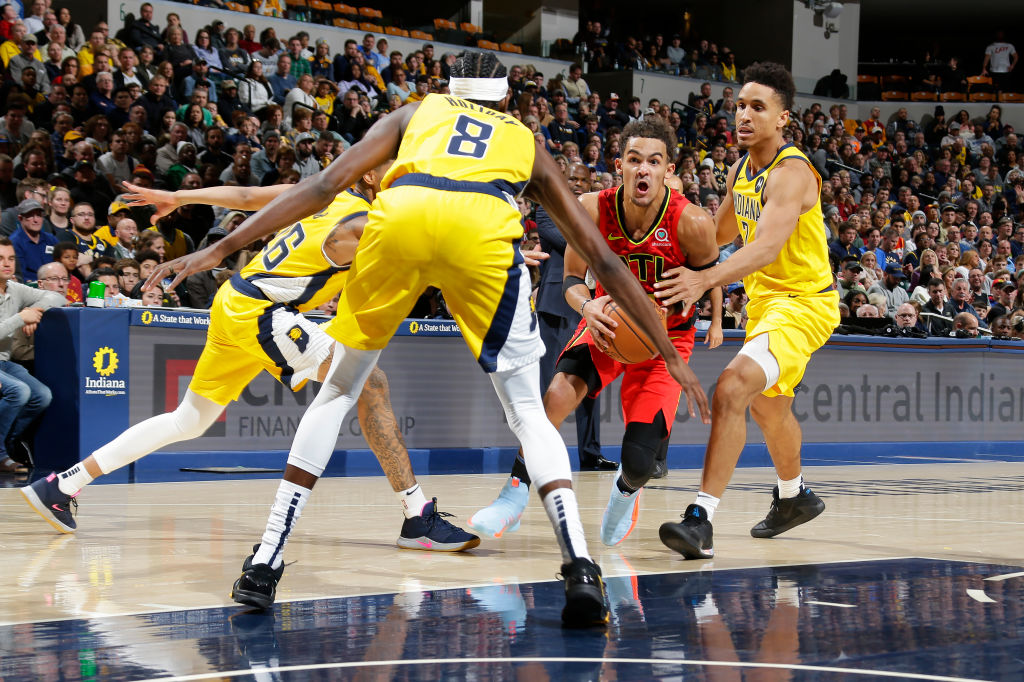 After succumbing to a pre-Thanksgiving loss to the Celtics, the Nets roared back in their second consecutive game against Boston. Guard Spencer Dinwiddie was fantastic in Kyrie Irving’s absence, scoring 32 points, dishing out 11 assists and swiping 2 steals. Third year center Jarrett Allen continued his solid play of late, scoring 14 points and grabbing 11 boards on 7-12 shooting.

The Celtics have played excellent ball recently, despite losing Gordon Hayward to a hand injury. Jayson Tatum has bounced back from his sophomore slump to take over the scoring reigns this year, and he scored 26 points, corralled 9 rebounds and collected 4 steals in the first game of Black Friday.

The Raptors just keep on winning. Amid a slew of free agent departures and injuries to Kyle Lowry and Serge Ibaka, Toronto has kept on chugging. They can even sustain an off-night from Pascal Siakam thanks to Norm Powell exploding for 33 points and Fred VanVleet putting up 22 and 7 steals.

The Magic shot 34% from the field, and that’s really the only stat you need to know to get an idea of how their night went.

It’s been an uninspiring start to the season for Detroit, but at least Derrick Rose has proven to be a spark plug off the bench. He dropped 23 points on 8-12 shooting, and also provided us this adorable moment with his son, PJ, before the game.

Giannis set the tone instantly with a dunk on the first play of the game, as the Bucks won their 10th straight game to finish off the Cavaliers. The Greek Freak remains a beast, and it’s incredible that he makes 33 points, 12 rebounds, 2 steals and 2 blocks seem ordinary.

Even in defeat, the Cavs have been competent. Rookie Darius Garland showed out with 21 points, 6 assists and 5 three-pointers. Keep an eye on the rook, because he’s going to be a stud in this league for a long time.

The 76ers had a sluggish start, as they were outscored 18-31 in the first quarter, but they eventually got their act together to take care of business. Joel Embiid was fantastic, scoring 27 points (albeit on a subpar 7-19 shooting), corralling 17 boards and swatting 3 shots, while Ben Simmons brought the 76ers home with a late-game inbounds steal and score.

He also converted this acrobatic layup on the move.

In perhaps the most visually appealing game this season (seriously, each team absolutely nailed their throwback jerseys), the Jazz were too much to handle for the young Grizz. Bojan Bogdanovic put up 33 points, Rudy Gobert chipped in a solid double-double and Donovan Mitchell added 20 points of his own.

The Thunder came back by outscoring the Pelicans 30-20 in the 4th quarter. Dennis Schroder led the way off the bench with 25 points and 7 assists, while Steven Adams finished them off with a thunderous (pun intended) slam dunk down the stretch.

The Pelicans are swill biding time before the Zion Williamson’s highly anticipated debut, but in the meantime, Brandon Ingram seems content to keep on cooking. He had the smoothest transition from spin move to dunk:

It’s so weird to see the record 4-16 next to the Warriors, but that’s what happens when Kevin Durant, Stephen Curry, Klay Thompson, Andre Iguodala and Shaun Livingston are absent.

The Heat have been one of the best stories of the young season, riding a new wave of their young talent (Tyler Herro, Kendrick Nunn, Bam Adebayo and Justise Winslow) to supplement their veteran core of Jimmy Butler, Goran Dragic and Kelly Olynyk. the team shot a blistering 52% from deep. Also, they never miss on the gorgeous Miami Vice city edition jerseys.

The Spurs broke out of their surprising downward spiral by giving the Clippers their first loss when Kawhi Leonard and Paul George both shared the court together.

For the Spurs, LaMarcus Aldridge had one of his most complete games of the season, going for 17 points, 8 rebounds, 7 assists and 4 blocks.

Despite a monstrous Trae Young performance (49 points on 16-28 shooting with 8 three-pointers and 9-9 from the line), the relentless Pacers pulled away in overtime. No other starter on the Hawks scored more than 7 points.

With Malcolm Brogdon back in the fold, Indiana has been rock solid this season. Every starter scored between 16 and 20 points; the epitome of a group effort.

Luka Doncic went scorched earth all over the poor Suns. The Slovenian sensation dropped 42 points, 9 rebounds and 11 assists in a convincing victory against the Suns. Tim Hardaway Jr also chipped in 26 points.

The Suns have slowed down a tad after an impressive start to the season, but a core four of Devin Booker, Aron Baynes, Kelly Oubre and Ricky Rubio has outscored opponents by 8 points per 100 possessions all season, and center DeAndre Ayton is set to return soon. The future is bright in Phoenix.

Melo is looking like his old self, and every moment is beautiful to watch. He scored 23 points and grabbed 11 boards, while teammate Hassan Whiteside swallowed a Blazers franchise record 10 blocks to go along with 15 rebounds. Maybe he grew dissatisfied with his NBA 2K rating again.

For the Bulls, Zach LaVine led the way with 28 points, 6 rebounds and 5 assists, and so far, zero public disputes with Jim Boylen today.

Well, that was certainly a blowout. The Lakers have been on fire this season and they showed no signs of letting up Friday at Staples. LeBron James and Anthony Davis led the way per usual, with commendable contributions from Rajon Rondo (who threw two beautiful alley-oops), JaVale McGee and Danny Green.