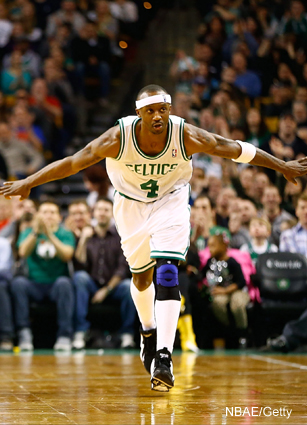 In a tale of two benches, the Clippers reserves ran the Knicks bench off the court, outscoring them 48-15 and once again showing that, when healthy, they are the deepest team in the League by far. Jamal Crawford completely outplayed his Sixth Man of the Year competition, J.R. Smith. Crawford scored 27 points on 12-22 shooting in his return to the Garden while Smith underwhelmed with 6 points on 1-9 shooting. New York led 73-71 after six straight points between Carmelo Anthony (42 points on 14-26 shooting, 8 boards) and STAT (9 points, 6 boards) but Los Angeles quickly responded with a 7-0 run to take a 78-73 lead early in the fourth. The Clippers owned the final quarter and outscored the Knicks (who are more interested in Fashion Week than winning basketball games, it seems) 31-18 to win by 14. Chris Paul was back to his normal self, scoring 25 points to go along with 7 dimes, 6 boards and only 1 turnover. Blake Griffin finished with 17 and 12 boards. Raymond Felton scored 20 points 0n 9-18 shoting but only had 5 assists and 4 turnovers.

LeBron James scored 30 for a franchise record fifth straight game on 12-18 shooting and grabbed 7 boards while dishing out 4 assists to lead the Heat past the Lakers. James was unstoppable in the second half, scoring Miami’s last 11 points of the third quarter to put the Heat up by five heading into the fourth. The Heat continued their onslaught in the final quarter as Dwyane Wade (30 points, 5 assists) finished a three-point play to put Miami up seven. Late in the game, Wade stepped in front of a Kobe Bryant pass, saved it from going out of bounds by flipping it to Chris Bosh who found Norris Cole. Cole raced down the court past Steve Nash then threw an overhead alley-oop pass to James who slammed it down and put a stamp on the victory. Kobe finished with 28 points on 11-19 shooting and 9 assists.

With the two hottest teams squaring off, it should come as no surprise that this one came down to the wire…and then some. Let’s pick things up at the end of regulation…With Boston clinging to a 92-90 lead, Ty Lawson (29 points, 6 boards, 9 assists in 54 minutes) hit a running bank shot to tie it up at 92 with under a second left and sent the game into overtime. The Nuggets had a 99-96 lead a the end of the first overtime when Jeff Green (17 points, 4 boards) tied it up with 23.8 seconds left to tie the game up at 99. Lawson once again had a chance to tie things up but his long 3-point try fell short and the game entered it’s second overtime. Denver led 105-104 in the second overtime and Lawson came through once again with a jumper to put the Nuggets up three with 18.9 seconds left. The C’s, whose veterans are no strangers to games like these, put the ball in Paul Pierce’s (27 points, 14 boards, 14 assists in 54 minutes) hands and The Truth hit a three with Andre Miller in his grill to tie the game at 107 apiece with five seconds left. Danilo Gallinari (18 points, 10 boards) had a chance to tie but missed his tough layup as time expired and the game went to a third OT. In the final five minutes of the game, Jason Terry (season-high 26 points) made the games two biggest plays. First, JET hit a 3-pointer with 1:33 left to break a 113 all tie that put the Celtics up for good. Then, with 35 seconds remaining, Terry stole the ball from Andre Miller to ice the game and keep the Celtics’ seven-game win streak intact.

Rudy Gay scored a game-high 20 points to lead the Raptors in scoring for the fifth straight game. Toronto led for much of the second half but the Hornets kept it close until T.Dot went on a 12-4 run led by the Raptors bench and Gay. After the run, the Hornets found themselves fighting an uphill battle down by 13 and were unable to mount a comeback. John Lucas III scored 19 points off the bench, Amir Johnson finished with 11 points and 10 boards and Kyle Lowry chipped in with 14 points and 10 dimes. Robin Lopez scored 19 points and Greivis Vasquez put together a 17-point, 7-rebound, 6-assist performance.

J.J. Redick scored 22 off the bench, Jameer Nelson dropped 15 dimes and Nic Vucevic finished with 17 points and 19 boards as the Magic upset the Blazers in Orlando. Over a four minute stretch in the second quarter, Gustavo Ayon found Andrew Nicholson for a layup, blocked a shot, tipped a ball for a steal and hit two jumpers to give the Magic the lead for good. Dame Lillard had the worst shooting game of his rookie year with 4 points on 1-16 shooting (0-8 from three) to go along with 12 dimes. LaMarcus Aldridge led all scorers with 25 points, 6 boards and 5 assists.

The Grizzlies outscored the T’Wolves 58-41 in the second half to run away with their second victory in a row. Memphis was up ten at the half and stretched the lead to 21 in the third with an early 15-4 run. The Grizzlies maintained their lead and led by 20 heading into the fourth. Tayshaun Prince scored 18 points, Zach Randolph scored 16 and grabbed 8 boards and Mike Conley finished with 16 points and 8 assists to lead Memphis. Ricky Rubio scored 17 for Minnesota.

In their first visit to to Kings County, the Spurs left their mark by stomping out the Nets who are yet to find their identity this season. With Tim Duncan and Manu Ginobili looking on from the bench, the Spurs outscored the Nets 30-14 (certainly not the first time BK has unraveled in the third quarter this season). In the fourth, San Antonio continued their onslaught–both offensively and defensively–and outscored BK 30-15 to finish off the Nets for good. Tony Parker finished with 29 points and 11 assists, Danny Green hit four 3’s and Tiago Splitter scored 13 and grabbed 9 boards in the win. Brook Lopez (18 and 9), Joe Johnson (19) and Deron Williams (15) led the Nets. San Antonio owns the NBA’s best record at 40-12.

Oklahoma City led wire to wire and were up by as many as 35 in a blowout victory over Phoenix. Kevin Durant scored 18 and grabbed 7 boards, Thabo Sefolosha scored 20 and Russ Westbrook finished with 24 points and 6 dimes in the win.

Isaiah Thomas went off in the fourth quarter, scoring 17 of his 23 points, to lead the Kings to a comeback victory over the Rockets. Houston led by ten points early in the fourth but the Kings went on a 17-17 run to tie the game and gain all momentum down the stretch. The Rockets pulled within two late but John Salmons (23 points, 6 dimes) hit both of his free throws to put the Kings up four and the game out of reach with nine seconds left. DeMarcus Cousins scored 20 points and grabbed 7 boards in 23 minutes. James Harden scored 30 points and Omer Asik grabbed 12 boards to go along with 17 points.