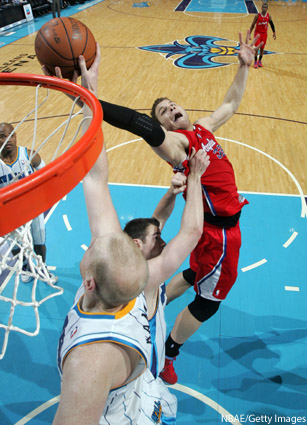 What a wild week in sports, huh? With the NFL stealing headlines mid-week and the NCAA Tournament back for the weekend, it’s hard for the NBA to get a minute it edge-wise. But the games continue to be salaciously entertaining on a nightly basis, including a select sampling of the six from last night. Read and react.

I’d really prefer to skip over this game, but hey, this is my job. When I flipped over to check out some of the college action last night, the Wizards were up by 20 at halftime. By the time I realized Washington had let Indiana come all the way back in the second half, it was over. The Pacers overcame what was a 22-point deficit in the first half, grabbing their first lead of the game at 84-83 with 1:01 remaining on a Paul George three-pointer after 3 consecutive late offensive rebounds from David West. On the game’s final possession, John Wall dribbled too long, putting up a floater (that went in) well after the buzzer sounded, and the Wiz suffered a crushing defeat. Indy won the second-half rebounding battle 26-11 and Roy Hibbert had 19 points and 9 boards to lead the Pacers.

Paul Pierce scored 25 points, Kevin Garnett finished with 16 points, 10 rebounds, 6 assists and 3 blocks and the Celtics held Milwaukee to just 33 second-half points in Monta Ellis’ home debut for the Bucks. Ellis shot just 6-18 and scored 13 points and fellow backcourt mate Brandon Jennings shot 6-14 with 19 points on the first night of a dreaded back-to-back-to-back for Milwaukee, which now sits in the No. 9 spot in the East, trailing the Knicks by 1.5 games. The Celtics are currently the 7-seed at 25-21 after last night’s win, which included 5 Greg Stiemsma blocked shots, 13 points off the bench for Mickael Pietrus and 30 team assists.

Chris Paul’s return to New Orleans didn’t go as planned. CP3 finished with 16 points and 9 assists, but shot 5-14 and his Clippers shot 4-23 in the fourth quarter, when they scored just 11 points, leading to a loss in front of his former home crowd. What’s wrong with Lob City? The big dunks are still there on a nightly basis, but the wins aren’t. New Orleans opened the fourth quarter on an 11-2 run, Chris Kaman had 20 points and 10 rebounds and Jarrett Jack and Jason Smith each chipped in 17 points for the Hornets, who shot an insane 58 percent from the field. Los Angeles, meanwhile, shot just 39 percent on field goals and 19 percent from 3-point range, and despite getting 21 and 11 from Blake Griffin (7-19 shooting), they were outscored on the fast break and had zero blocked shots, to 8 for NOLA. The Clips are 26-21 but starting to fade on Vinny Del Negro.

Golden State’s frontcourt was used to getting dominated even before losing Ekpe Udoh to Milwaukee. Now, it’s almost too easy. Chandler Parsons racked up 20 points and a career-high 11 rebounds, Samuel Dalembert went for 15 points and 10 boards, Luis Scola had 18 points and 7 assists and the Rockets outscored the Warriors 58 to 38 in the paint, plus outrebounded the Dubs 48-31 en route to another big win for H-Town. GSW has lost 5 of 6 games (tank, cough, tank) and are suddenly plummeting in the wake of the Monta Ellis trade and the whole booing-the-owner-at-Chris-Mullin’s-jersey-retirement thing.

The Kings frontline of DeMarcus Cousins (22 points, 18 boards) and Jason Thompson (19 and 15) played huge again, but Al Jefferson racked up 26 points, 7 rebounds and 4 blocked shots and tipped in the game-winner with 0.9 seconds to go, lifting Utah to 25-22 on the year. Sacramento outscored the Jazz 70-54 in points in the paint and made a 14-point Utah lead evaporate in the second haf, but Jefferson provided the theatrics in what was an ugly game for the most part. For what it’s worth, Devin Harris claimed this was a pass. I’m skeptical, but hey, whatever works!

Gilbert Arenas is back! Okay, the exclamation was probably not the appropriate reaction, but Agent Zero is technically back as an NBA player—last night he scored 2 points on 1-4 shooting off the bench in a Grizzlies L. Portland got 24 points from Nicolas Batum and 18 points and 9 boards from Wes Matthews as the revamped (read: gutted) Blazers got a bounce-back win. PDX shot 25-25 from the free throw line (10-10 from Jamal Crawford alone, including 4 clutch ones down the stretch), besting Memphis’ 16-23 from the charity stripe and the Blazers made 10 threes.

Dunk of the Night: Trevor Booker with the drive and finish—when things were still going good for the Wiz.

Tonight: Pete’s back to hold you down Friday night with 11 games. I’ll catch you guys on Sunday morning, after what’s sure to be a thrilling night in Newark for Bobcats at Nets. Be easy.