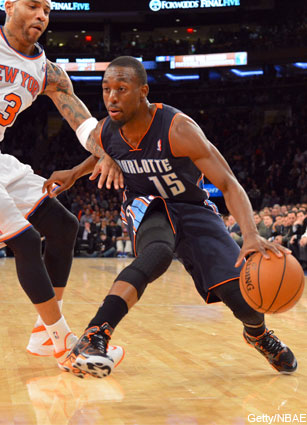 Real trouble for the Knicks. They went down 11-4 to start the game, and never seemed to find a groove. Lots of bad stuff to cover.

Carmelo Anthony needed 28 shots to score his 32 points, Amar’e Stoudemire was brutally bad in 11 minutes and Andrea Bargnani posted a pathetic 6 points and 2 boards in 23 minutes despite starting the game. New York got outrebounded 51-33 by a team that started Bismack Biyombo and Josh McRoberts down low. That had a lot to do with the fact that New York fired off 11 more shots than Charlotte did… which had a lot to do with the fact that Charlotte got to the line a ridiculous 42 times. The Knicks had more turnovers (14) than assists (12). The list goes on and on and on, but the box score doesn’t show the worst of it for New York.

Late in the first quarter, Tyson Chandler collided with Kemba Walker and left the game with a knee injury. He immediately went for X-rays, but they were deemed “inconclusive,” so TC will likely be diagnosed on Wednesday. An extended absence will force Bargnani, STAT, Kenyon Martin and maybe Cole Aldrich to somehow cover the five. Just a nightmare of a game for the Knickerbockers.

That’s not to take away from the Bobcats, though, who played a solid game behind Kemba Walker (9/20, 25 points, 6 assists). Michael Kidd-Gilchrist scored 16 points with 8 boards and a trio of rejections and Gerald Henderson added 18. Charlotte knocked down 8 treys and 34 free throws on the evening.

No Chris Bosh, no problem last night for the repeat champs. Toronto kept things close for most of the game, but let Miami jump out to a 12-0 run to open the fourth and never recovered.

LeBron led all scorers and did lots of LeBron things. He finished with 35 points (13/20 field goals, 8/8 free throws), 8 dimes, 8 boards, a three and a steal. Dwyane Wade looked strong with 20 points on 9-of-19 shooting with 6 boards and 5 assists. It looks like they’ll limit his playing time this year—mainly on the backend of back-to-backs—but he’s still got plenty left in the tank.

Toronto got 21 from DeMar DeRozan, 18 and 9 from Jonas Valanciunas and a double-double from Rudy Gay, but just couldn’t contain the Heat late.

The Nets dropped games against Orlando and Cleveland during the first week of the season, but came out with real intensity and smoked Utah last night in Brooklyn. They led by 14 points at half time and 22 after three.

Brook Lopez had it going early and often, and finished with 27 points (10/13), 7 boards and a pair of steals. Deron Williams scored 10 points with 8 assists in 24 minutes against his former team. He’s had a so-so start to the season after battling ankle problems over the summer, and while he did enough to help them win last night, the Nets will need vintage Deron if they want to make a serious Playoff run.

The Jazz got 22 from Gordon Hayward and 21 from Enes Kanter, but shot a horrific 37.8 percent from the floor and committed 20 turnovers versus 17 assists. These things happen when Richard Jefferson and Jamaal Tinsley start for your team.

Pretty wild first half in Detroit last night. The Pacers led 29-14 after the first quarter, but managed just 9 points in the second quarter, allowing Detroit to take a four-point lead into the break. Indiana blew the Pistons out in the second half, though, and remained the L’s last remaining undefeated team.

Paul George was huge with 31 points, including 4 threes, and added 10 boards, 4 assists and 4 steals. Roy Hibbert continued to dominate on the defense end, as he swatted seven shots in 34 minutes and pulled down 10 rebounds as well. CJ Watson started in place of the injured George Hill and scored 15 with 5 assists.

Brandon Jennings and Josh Smith showed what bad nights will look like for the Pistons: a combined 11/36 shooting between the lefty duo. On the bright side, Greg Monroe posted a double-double and Kyle Singler scored 13 points off the bench.

Phoenix went up four with just under five minutes to play last night—a classic game for a young rebuilding team on the road to nearly win before letting it slip. But in fact they hung on fairly easily, thwarting NOLA’s lame comeback attempt.

Eric Bledsoe was unreal for the Suns, hitting 10 of his 12 field goals and all 4 free throw attempts. He handed out 5 assists, grabbed 4 rebounds and picked up three steals. He’s averaging about 23 points, 8 dimes and 6 boards on the season, delivering on the potential we’ve all seen him flash over the last few years. Gerald Green scored 18 points despite not making any free throws or two-pointers—he was 6/10 from beyond the arc. The Morris twins combined for 33 points off the bench.

Eric Gordon was solid against the team he nearly signed with (ahem, did sign with) a little over a year ago. He scored 20 points to go along with 5 assists and 3 steals, and I think we’re all just hoping he can stay on the floor for a while. Stat lines like this are routine for a healthy EG. Anthony Davis continued his major start to the season with 17 points, 11 boards and 5 rejections. The dude’s a machine.

The Lakers are really bad at defense. At one point last night, they appeared to try a 3-1-1 zone, which NBATV’s C-Web said he’d never seen before. The Mavs did just about whatever they wanted offensively, and in all seven guys scored in double-figures. Dallas shot 52 percent from the field, including 13/27 from deep. Perhaps the clearest sign of LA’s defensive woes was Monta Ellis shooting 11/14 from the floor.

This was a blowout from start to finish, and the only guy who played well for the Lakers was Nick Young, if you call dribbling way too much, launching 12 tough shots and somehow hitting 8 of them playing well. The Lakers are a funky bunch that might play some interesting games at the Staples Center (I, for one, buy into the old adage about role players only performing well at home), but they’re among the handful of teams in the League with a real shot at Wiggins. Until this guy comes back, anyway.

The Nuggets led 80-78 early in the fourth, but the Spurs dominated the final nine minutes of Tuesday night’s game in Denver. Tony Parker led the charge for San Antonio with 24 and 6, while Tim Duncan added 17 and 8 and Kawhi Leonard chipped in 14. The Spurs struggled from downtown (4/16), but made 18/20 free throws and scored 54 points in the paint.

Denver got 20 points and 8 assists from Ty Lawson, but not enough from the supporting cast. With Wilson Chandler and Danilo Gallinari out, the team is relying way too heavily on the likes of Jordan Hamilton and Randy Foye. They’ve got a good shot at turning it around, but the 0-3 Nuggets haven’t yet scored 100 points in a game. That’s a serious letdown from the team that scored the most points in the NBA last season.

The Rockets appeared dangerously flawed during Monday’s loss at the Clippers, but bounced back nicely on Tuesday. Portland’s a tough place to get a W, but Houston lead by about ten for the entire fourth quarter.

James Harden dropped 33 after a letdown game against Lob City. He knocked down 9 free throws and snagged 7 boards (he also turned the ball over 8 times). Dwight Howard was big, too, scoring 29 points on 10/13 shooting with 13 boards (and 6 turnovers of his own). It doesn’t get much better for the Rockets duo.

Not to nit-pick, but for the second straight night, Omer Asik saw between 20-25 minutes while Omri Casspi and Francisco Garcia combined for about 50 minutes. All three were inefficient, and I think the Rockets are going to really struggle to fill that fifth spot in the lineup. They need to make a move to solidify the rotation—mark me down as a doubter of the Howard/Asik combination, and definitely mark me down as a doubter that any team playing both Casspi and Garcia more than 20 minutes nightly can be a title threat.

The Blazers fell to .500 despite 22 from Damian Lillard, 21 from LaMarcus Aldridge and 19 from Wesley Matthews. They got next to no production outside of those three guys, as Nic Batum shot 4/10 and the bench was abysmal. The Blazers are still figuring out how some new pieces fit together (and waiting for CJ McCollum to get healthy), and I like their chances long-term.

The Hawks stuck to their game plan last night and it got them a win in Sacto. The offense ran through Al Horford and Paul Millsap, who combined to shoot 20/34 with 52 points. Jeff Teague handed out 10 assists and knocked down a couple of treys, helping the Hawks hold off a late Kings push.

Isaiah Thomas went for 26 for the Kings, and he’s been much better than Greivis Vasquez so far this season. Greivis started, but Isaiah saw a handful more minutes. Rookie Ben McLemore dropped 15 following a 19-point showing in the Kings’ last game. As always, Sacramento has some seriously talented guys, but they need to figure out how to put the components together.

This season, I’ll be posting a semi-random highlight video of a former baller at the bottom of my Post Ups. I did it at the end of last season with Shawn Kemp’s top oops for more-or-less no reason, and it seemed to go over well. This is the first installment for the ’13-14 season, and we’re kicking it off with The Answer in honor of his recent retirement. Sit back and enjoy this unbelievable compilation of every clutch shot AI hit in the L.