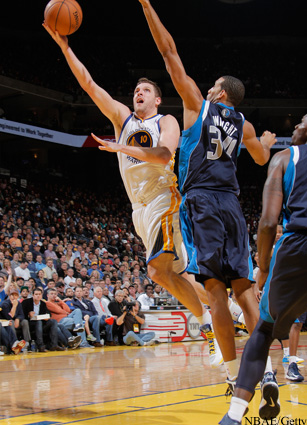 After wrapping up a six-game road trip, the Thunder returned to Oklahoma City and beat up on a short handed Grizzlies team. The Thunder jumped out to a 26-point lead before Russell Westbrook threw a weird temper tantrum that caused him leave the court for the locker room and ultimately get benched for the rest of the third quarter by Scott Brooks. The episode was distracting enough to OKC that they allowed Memphis cut the deficit to ten. Westbrook was inserted back into the game and the Thunder quickly went on a 9-2 run to make it 86-69 with 9:32 left in the game. The Grizzlies posed no threat after that. Kevin Durant finished with 27 points, 7 boards and 6 dimes and Westbrook tallied  21 points, 9 boards, 6 assists and 5 turnovers. Jerryd Bayless led Memphis with 23 points and 6 assists.

David Lee was downright dominant, finishing with 15 points, 20 boards and 9 assists while Klay Thompson scored 27 as the Warriors held on to defeat the Mavs. Golden State trailed 79-78 heading into the fourth but opened the final quarter on a 12-0 run to take a 90-79 lead. The Mavs struggled to score early on in the quarter but after a Vince Carter (22 points) free throw broke the scoreless streak, Dallas went on a 13-2 run of their own to tie the game at 92. The two teams traded buckets down the stretch and O.J. Mayo (25 points, 6 assists) cut the Golden State lead to one after splitting a pair of free throws with 43 seconds remaining. Neither team could find the basket on the next few possessions and the Mavs had a chance to take the lead with time running down. Dallas worked the ball inside to Brandan Wright who’s shot was blocked by Andrew Bogut (there was definitely some contact, but the ref did the right thing by swallowing his whistle). Jarrett Jack (13 points, 9 dimes) grabbed the loose ball and was fouled. He hit both free throws on the other end to ice the game.