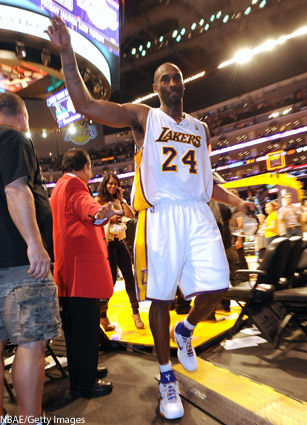 With about five minutes left in the Clippers-Warriors game, I realized that both L.A. teams hosted home games on Sunday, within a span of about 7 hours. That is so cool. And hey, it wasn’t a half-bad doubleheader. But there were 6 other games on the schedule on Sunday, so let’s get to it.

The boo birds were out in full force last night, as the Knicks dropped their 5th game in a row. The Sixers boosted a 2-point halftime lead with a monster third quarter (outscoring the Knicks 38-24) behind 12 of Lou Williams’ game-high 28 points, and ran away from New York, leading by 21 at one point. Evan Turner posted a career-high 15 rebounds, plus 24 points, Andre Iguodala got flirty with a trip-doub (19-7-8) and Philly shot 51 percent from the field in the win. Carmelo Anthony led the Knicks with 22 points, but shot 5-13 and Jeremy Lin shot 5-18 (14 points) and had 6 turnovers to his 7 assists. In New York’s five straight losses, opponents are scoring 110.6 points per game.

People get excited about Lakers-Celtics, and when they play games like this, it’s hard not to. It was a heated game at times—well, I guess only if you ask Metta World Peace, who took on everyone from Paul Pierce to Rajon Rondo. Kobe Bryant, mask and all, scored 10 of his game-high 26 points in the fourth quarter, including the go-ahead jumper with 41.7 seconds remaining, Andrew Bynum delivered another big bucket late and the Celtics’ frantic attempts to tie on the game’s final possession fell short as Los Angeles improved to 25-16 and 18-2 at Staples Center. Oh, and Bynum’s monster basket? Kobe called the audible, “deferring” to his young center in the clutch. After falling behind early, Boston used a 20-7 run to end the first half to get back into the game, and the Celtics even had a 5-point lead with 2:38 to play, but that’s when they stopped scoring—literally, as the Lakers scored the last 8 points of the contest. L.A. has won the last three meetings between these two teams, the latest behind Bynum’s 20 points and 14 boards, a 13-13 double-double from Pau Gasol and a big-time advantage inside: Boston was outscored 42-30 in the paint and 17-8 on second chance points. Rondo joined the NBA’s team of superheroes with his pre-game sunglasses situation, and he poured in a team-high 24 points and 10 assists for the Cs, but even with all 5 starters in double figures, Boston succumbed to the Lake Show’s late theatrics. The Celtics are 5-11 on the road this year.

With Kyle Lowry sidelined due to illness, the Rockets had no answer for Kyrie Irving, who turned it on late and delivered a 21-point, 5-assist, 6-rebound performance to push the Cavaliers past Houston. In Lowry’s absence, Luis Scola did all he could to lead Houston, with 30 points and 8 boards, but the Cavs outscored the Rockets on the break (18-5) and scored a season-high 118 points on the night to get their third straight win. Antawn Jamison scored a team-high 28 points and Cleveland won despite allowing H-Town to shoot 51 percent on field goals. Lastly, I’ve said it before and I’ll say it again—Kevin Martin has disappeared. Against the Cavs, he had as many turnovers as points (3) in his 16 minutes of action. Consider: even Jonny Flynn scored 4.

It probably shouldn’t be quite this lopsided when two Eastern Conference All-Star centers match up, should it? Dwight Howard racked up 30 points, 13 rebounds, 5 assists and 4 steals, while Roy Hibbert could only com eup with 10 points, 2 boards, 2 blocks and 2 steals, as the Pacers dropped their 4th in a row. Orlando used Howard’s muscle inside to get open looks from deep, hitting 10 three-balls to just 1 for Indiana. JJ Redick and Quentin Richardson stepped into the starting lineup for the Magic with Jason Richardson and Hedo Turkoglu out (Hedo due to suspension) and Orlando didn’t skip a beat—Redick dished out a career-high 9 dimes to go with his 18 points and QRich had 10 points. At one point, the Magic led by 29.

If Linsanity is dying down, Ersanity is alive and well. Ersan Ilyasova scored 31 points (including 3-3 on threes) and had 12 rebounds in a career-high 44 minutes, as the Bucks snapped a 4-game road losing streak to improve to 17-24 on the year. Brandon Jennings struggled with his shot again (4-14, 11 points), but Drew Gooden added 21 points, Mike Dunleavy had 19 and Milwaukee held Andrea Bargnani to just 11 points on 4-10 shooting in his second game back from injury. Toronto let a double-digit lead first-half lead slip away despite 16 points from Jerryd Bayless and 21 from DeMar Derozan, and the Raps are now 13-28.

Ty Lawson’s first basket of the ballgame got Denver to within 3 points with just under 5 minutes to play, but OJ Mayo put the Grizzlies up 5 with a 3-pointer from the top of the key with 57 seconds left to play, and Denver turned it over on the game’s last possession—they didn’t even get a shot off with a chance to tie it—and Memphis improves to 24-16. The Nuggets had 24 turnovers, none more costly than the last one, as Andre Miller bobbled away the home team’s last attempt to avoid being swept by the Grizz this season (3 games by a total of 7 points). Memphis shot 51 percent from the field, got a game-high 22 points from Mayo, and has now won 6 of 7. Meanwhile, Danilo Gallinari failed to score a single point in his 21 minutes of action (0-5 FGs, 5 rebounds, 4 nifty assists). Also, Brent Barry called Chris “Birdman” Anderson “the man with the dragon tattoo.” Good one, Brent!

Both teams went small for a lot of this game, as the Hawks adjusted to the Kings’ 3-guard lineup and beat Sacramento at its own game. Josh Smith continues his “I shoulda been an All-Star, bro” campaign, this time dropping 28 points, 6 rebounds, and 3 each of assists, steals and blocked shots. Atlanta let the Kings hang around by turning the ball over 23 times and allowing DeMarcus Cousins to look like Magic Johnson on at least one occasion. DMC finished with 28 points and 12 rebounds and the Kings hit 10 threes to keep SacTown in it until late, but Marvin Williams delivered the dagger with a fast break dunk plus the foul with 27.7 seconds left to give the Hawks a double-digit lead. Joe Johnson chipped in 21 points for ATL, which took home its 8th straight win over Sacramento in the all-time team series.

What’s up with L.A. guards and The Mask? CP3’s nasal fracture on Friday forced him to rock the plastic last night, and though he finished with 23 points despite the extra headgear, the Clips fell behind big early to the Warriors and couldn’t complete a furious comeback. Dorell Wright started hot, scoring 16 of his 20 points in the first quarter, and Golden State held a 13-point lead by halftime, ballooning to 21 in the third quarter. But Lob City came all the way back to tie the game at 83 with 4:30 to play on a Blake Griffin dunk. Golden State wouldn’t fold, though, as a Brandon Rush tip-dunk and a David Lee spinning layup on consecutive possessions gave the Warriors a 5-point lead with 1:30 remaining, and the Clips fell to 23-16 on the year. Monta Ellis led GSW with a 21-6-11 line, while his backcourt mate Steph Curry started but played only 9 minutes on his tender ankle.

Moment of the Night: Drama in Hollywood. Acts I, II and III.

Dunk of the Night: Kenneth Faried drops the hammer on the Grizz.

Tonight: ESPN has Bulls-Knicks and Celtics-Clippers, plus I’ll have my eye on Wizards-Spurs and the 4 other games on the schedule. Catch you all in the morning.