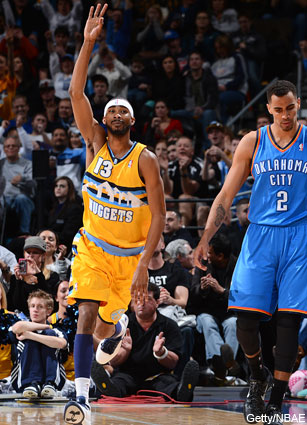 Good morning, sweet world! The NBA had a short but sweet set of games before today’s main course of MLK Day matchups.

The Lakers continued to fall down the rabbit hole, the Cs looked in need of roster/lineup changes, the Mavs may be rounding into form, and the Nuggets and Thunder made sure it was a night to remember.

The Thunder were 20-4 this season when both Kevin Durant and Russell Westbrook scored at least 20 points. Well, not even 30-plus point performances from KD and RW could get the W for the Thunder last night, as the Nuggets snapped OKCs six-game winning streak.

Corey Brewer, who has been playing exceptionally well off the bench recently, was the difference for Denver—grabbing O-boards, scoring at will from deep and running the fast break. He set the pace for the Nuggets in the second half, dropping 15 points in the forth quarter alone.

KD scored 37—his forth consecutive 30-plus game—and hit 20-21 free throws (after hitting a perfect 21-21 from the stripe on Friday). Westbrook sprained his ankle pretty bad just before the half, but was back in the lineup to start the third quarter. Even with some soreness, Russ managed to sink a cold three to send the game into the extra period and still finished with 36 points. He is not human.

Nuggets started 3-3 in OT but went 0-5 until the closing minute, when Kenneth Faried came up big. The Manimal (16 and 10) knocked down a little six-footer in the lane to put the Nuggets up by one. The game went into a foul-shooting contest from there, and the Nuggets reversed a 20-point loss to OKC last Wednesday and handed the Thunder their first OT loss of the season.

Andre Iguodala was practically nonexistent. After a hard fall, he sat out the fourth quarter while Brewer (26 points) caught fire. Iggy needed 18 points in the contest to reach 10,000 for his career. His nine couldn’t get the job done.

Kosta Koufos (10 and 11) has been solid for the Nuggs as of late, unlike JaVale McGee, who has been forced to take notes on Koufos’ toughness from the bench.

Somehow, things keep getting worse for the Lakers. Landry Fields had his best game as a Raptor, dropping 18 and 10 on 8-11 shooting, and provided some fantastic defense on Kobe Bryant. The Lakers lost their fifth straight on the road and dropped their eighth game in their last 10.

Dwight Howard was ejected just before the half on two Ts, opening the door for Earl Clark, who is finally showing glimpses of that potential he displayed while at Louisville. The versatile forward went relentlessly after every board and finished with a very solid 14 points and 14 boards.

Pau Gasol returned to the starting lineup after coming off the bench on Thursday and dropped 25. For all intents and purposes, Pau looked like the pre-D’Antoni Gasol.

Ed Davis scored 18 points with 8 boards, but didn’t play at all in the forth quarter. Oddly, despite the 23-year-old’s hot night, Raptors coach Dwane Casey opted to go with Amir Johnson, who sat out most of the first half while in foul trouble.

The Lakers are three games out of the 8-seed in the West. Will they even qualify for the Playoffs?

Boston fell behind by double-digits in the first quarter and never led in the game. Rajon Rondo’s errant shots and passes didn’t help matters, as the All-Star finished with 8 points, 15 assists, 9 boards and 9 turnovers.

Detroit’s PG Brandon Knight limped off the court after tweaking his ankle, but he returned to start the second half and finished with 15 points and 7 turnovers. Greg Monroe finished with a quiet 15 and 11, his seventh double-double in his last eight games. He’s having a nice January.

The Celts fell to 20-20 with the loss, their third straight. Doc Rivers sounded perfectly serious about shaking up the roster after the game (“I gotta either find the right combination, the right guys, or we’re gonna get some guys outta here.”). Everyone wearing green looked lifeless last night…well, everyone except this dude Rondo.

The Mavs quickly fell into a 14-2 hole after just four minutes of play, but it was Vince Carter and Elton Brand who juiced it up for Dallas with big games off the bench.

Carter finished with 15 and 6 dimes and Brand with 14 and 6 boards, but it was the Matrix who led the way for the Mavs, with a classic line of 20 points, 10 rebounds, 4 assists and 3 steals. Ice baths, FTW.

Seven Mavs scored in double figures, and Dallas got its fifth win in six games. Orlando, on the other hand, lost its seventh straight to a sub-.500 opponent. Yikes.

Much like the Mavs as a team, Dirk Nowitzki’s still working himself into shape right now, as he dropped just 12 points in the contest. That said, he’s scored double-digit points in every game this month.

Oh, and let’s not forget the latest out of Sacramento:

So the Kings getting sold for 525M!! And the owners ain’t making no money huh? What the hell we have a lookout for. Get the hell out of here

And from what I hear the 525M isn’t even the whole % of the team! Smh. One thing is I can’t hate on their hustle though. Crazy

I do know Mayor Johnson and the city/fans of Sacramento will do whatever it takes to keep the team put. We’ll see what happens #NBAFiles