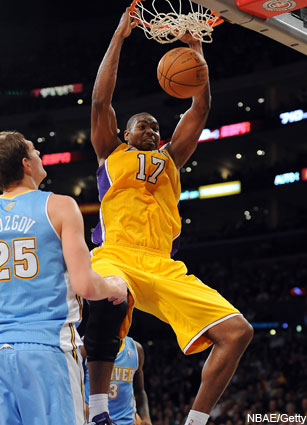 Happy New Year everybody! Hope you all had a great night and are ready for what promises to be an exciting 2012 in the NBA.

A lot of teams looked like they were more interested in celebrating the New Year than handling business on the court last night which lead to a lot of blowouts and some poor performances. Andrew Bynum returned for the Lakers and helped L.A. best a pesky Denver squad while the Knicks righted the ship with an easy victory out in Sacramento. And don’t look now, but Kyle Lowry is putting together a breakout season down in H-Town. Let’s get right to it…

Coming off a suspension stemming from this flagrant foul in last year’s playoffs, Andrew Bynum came through big time to lead the Lakers against Denver yesterday afternoon. The big guy looked dominant all day and got off to a quick start going 4-5 from the field for 10 points and used his fresh legs to out muscle and out play Denver’s front court. Despite Nene’s best efforts, the Nuggets had no answer for him down low, and Bynum finished with 29 points and 13 boards on 13-18 shooting. Displaying some flashy footwork and hustle, Bynum could not be stopped and reminded folks why he has been off the trade block and remains so valuable to the Lakers. With Bynum in the lineup, the Lakers looked dangerous, but once again it was Kobe Bryant who came through and made some clutch plays in the fourth. Finishing an assist shy of a triple-double (17/10/9), Kobe Bean overcame a slow start and finished strong to put away a determined Nuggets team led by Al Harrington’s 21 off the bench.

The Nuggets played their hearts out, but had a few bad breaks in the fourth that kept them from beating L.A. on the road. Danilo Gallinari had a shot to to tie the game up late in the fourth but saw a wide open layup rim out, sometimes the basketball gods just don’t let things go your way. Denver, who goes 10 deep, will be a problem in the Western Conference all season long but lack a true go to scorer in crunch time. George Karl has a tough group of players who play hard for him but got destroyed inside by the Lakers on Saturday afternoon; the trio of

Bynum/Gasol/McBob finished 23-31 to outscore the Nuggets 46-32 in the paint. I’m interested as to why Kenneth Faried didn’t get a shot with the Nuggets struggling to contain Bynum, if anything he could have given them energy and fouls off the bench.

After a tremendous dunk earlier this week, Metta World Peace looked like he may have used up his springs for the season already. Also, Derek Fisher played his 500th straight regular season game. Props to him, he had an exhausting off-season but still comes to work like everyday he’s trying to make the team, he made some big plays for the Lakers last night and his hustle play is something that will trickle down the entire Lakers bench; Mike Brown must love having him around despite his limited ability.

Playing for the third time in four nights, the Pacers fell for the first time this season to the woeful Pistons on the road. Led by Greg Monroe’s double-double and Jonas Jerekbo’s 20, Lawrence Frank got his first dub as the head coach of the Pistons and ended his 20 game losing streak. Jerekbo, who is coming off last year’s season ending achilles injury, looked confident as he scored from both inside and outside. Jerekbo simply out hustled David West who was benched by head coach Frank Vogel in the fourth quarter after going 4-11 and playing some all around uninspiring ball. The Pacers once again shot poorly from the floor, shooting under 40 percent for the second night in a row. Indy has a talented team but they can’t expect to continue their winning ways if they keep shooting so dreadfully from the floor. The Pistons on the other hand, came out scorching in the third quarter and led the Pacers 82-64 heading into the fourth. Indy did cut it to six, but a Jerekbo steal with a minute left put an end to any hopes of a comeback.

Plain and simple, Kyle Lowry has been balling out for the Rockets thus far and continued his strong play last night against the Hawks with 18 assists and one amazing block (dude has serious bounce.) The Rockets have looked like a completely different team at home this season. At the Toyota Center, the Rockets have held opponents to 84.5 points on 40.5 percent shooting. Compare that to 109 points on 54.6 percent shooting on the road. Kevin Martin had another strong performance for Houston, notching 27 points most of which came from 6 treys. On his return trip to Houston, T-Mac caught a fair amount of boos but had a strong game going 6-11 for 13 points off the bench. ATL looked like they would rather be partying than playing a basketball game despite Houston doing their best effort to gift wrap the game for them after four straight turnovers in the final quarter of play. Houston, who was playing their third game in as many nights (this schedule is insane!) didn’t trail once the entire game and fed off Lowry’s energetic play to carry them to victory.

Only 12 points for Kevin Durant? Fortunately the Thunder had Daequan Cook, who knocked down four straight 3-pointers in the second quarter…then left the game with flu like symptoms, just a bizarre game overall. The game was never really close though, and the Thunder now sit at 5-0 after becoming only the second team in NBA history to win five games in seven days. The Thunder led from opening tip to final whistle and were up by 20+ throughout most of the contest. The OKC bench dropped 53 points and severely outplayed the Suns starters who looked run down after playing in New Orleans last night. Big congratulations to Steve Nash for hitting the 1,000th 3-pointer of his incredible career.

The Knicks and Kings have been playing a very similar style of gameplay this season: pass around the 3-point line than have one of your stars play one on five then play very little defense on the opposite end. But, the Knicks looked a bit more coherent last night and played much better offensively than the previous two games. With Amar’e on the bench, the Knicks saw all 5 of their starters score in double digits, including 23 from Melo and 22 from Tyson Chandler. Chandler had his best game in a Knicks uniform, shooting 6-8 from the field, 10-10 from the stripe, and provided tough defense inside. Josh Harrellson (Jorts!) earned his first career start and made the best of his opportunity scoring 14 points and grabbing 12 boards while outplaying his former Kentucky teammate DeMarcus Cousins. The Kings have been playing some terrible basketball and just can’t seem to put it together despite some talented pieces and Coach Westphal must be pulling his hair out every night when he gets home. It’s maddening to watch a team with so much potential just refuse to play team basketball; the Kings only had 15 assists and shot 34.9 percent from the field. Sac Town looks much more interested in getting their individual stats than getting dubs, a shame since they have such a loyal fan base. This game was never close as the Knicks asserted their dominance early and often and led by double digits throughout the second half.

Greg Popovich earned his 800th victory as a head coach as the Spurs cruised to an easy victory on the strength of Manu Ginobili’s 23 points (5-5 from 3-point land); 14 of which came in the 2nd quarter. The Spurs were wet from the three point line, outscoring the Jazz 30-6 from beyond the arc and this game was never really close. Al Jefferson returned to the starting lineup for the Jazz after missing Friday’s game with an injury and had himself a nice game with 21 points and 11 boards.

Another game, another blowout. The Sixers, who were playing their fourth road game in six nights, rode Lou Williams 23 points to an easy victory. Williams has been playing stellar off the bench and has provided Philly with solid minutes and instant offense. The Sixers were down 13 after one but outscored the Warriors, who were without Monta Ellis, 31-17 in the second quarter and the game was never close after that. Steph Curry returned from his ankle injury and dropped 21 but it wasn’t enough as he didn’t see much help from the rest of his teammates.

Play of the Night: Kyle Lowry goes high for the block

Tonight: Abe is back tomorrow and will recap tonight’s nine games including his beloved Wizards who take on the Celtics in D.C.. Happy New Year everybody, thanks for rocking with me this weekend.