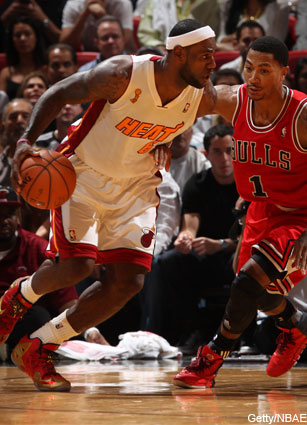 Derrick Rose is back. Xavier Henry is back. The National Basketball Association is back. All is right in the world.

Heat 107, Bulls 95
You can ignore the box score and even the final score for this one. Derrick Rose is here.

The former MVP handled 34 minutes against Miami last night—just a tick under his career average—and looked more or less like D-Rose. He finished with ugly numbers (5/15, 5 turnovers, 4 assists), but just seeing him fly around against LeBron & Co. was a beautiful sight for any hoops fan.

Miami blew Chicago out in the second quarter, and the game wasn’t really close until the Bulls made a late surge that fell well short. The Heat had seven guys in double figures, including LeBron (17, 8 dimes, 6 boards), Chris Bosh (16 & 6) and Dwyane Wade (13). The team knocked down 11/20 threes, with Shane Battier connecting on all four of his tries from downtown.

Chicago got a monster effort from Carlos Boozer—31 points on 13/18 shooting. Jimmy Butler went for 20 with 5 steals, sparking many of Chicago’s 17 fast break points. Enjoy the moment, Chicago haters—I suspect this will be the last time we see Thibs’ squad under .500 for a long, long time.

Pacers 97, Magic 87
Orlando took a lead into halftime of the season’s first game, but Indiana owned the second half. Roy Hibbert was a force with 16 boards and 7 rejections, and Paul George kicked in 24 with three treys. Lance Stephenson looked great filling in for Danny Granger, finishing with 19 points, 7 boards and 5 dimes. They’ll need him to step up like that all year if they want to make a push for the East’s top seed.

The big story for Orlando entering the game was Victor Oladipo’s debut. The second overall pick came off the bench and played 23 minutes, but he shot just 4-of-11. In all, he tallied 12 points, 3 rebounds and 2 assists—far bigger things are yet to come. Andrew Nicholson was solid with 18 points, and Nikola Vucevic picked up right where left off last season, snagging 10 boards to go with his 8 points. Orlando might not win many games, but they’ll be a pretty tough out most nights this season.

Lakers 116, Clippers 103
What???? The Clippers and Lakers battled evenly for three quarters last night, but it seemed like last year’s division champions would pull away eventually. Then the Lakers’ Henry-Jordan Famar-Jordan Hill-Wesley Johnson-Jodie Meeks rotation destroyed the team that I picked to win the title, and boom: a 13-point Lakers win that made no sense.

The numbers were all there for the Clippers—CP3 had 15 and 11, Blake Griffin went for 19 and 7, Jamal Crawford and JJ Redick combined for 28 and DeAndre Jordan even came through with 17 and 11. But something just clicked for the Lakers’ reserve unit, and the game was iced with about four minutes still on the clock.

When all was said and done, Henry led the team with 22 points and Farmar scored 16 with 6 assists. Jordan Farmar! Each of Meeks, Hill, Chris Kaman and Nick Young scored between 10 and 13, too. Meanwhile, Pau Gasol was on-point with 15 and 13, leading a completely functional offense during the first three quarters. It didn’t even matter that Steve Nash played a brutal 21 minutes and finished with 3 points and 5 assists.

It’s tough to say what this means for the rest of the year. Frankly, it’s probably an outlier before a big season for the Clippers and a bad one for the Lakers. But, at least for a night or two, the Lakers are still the best team in LA.