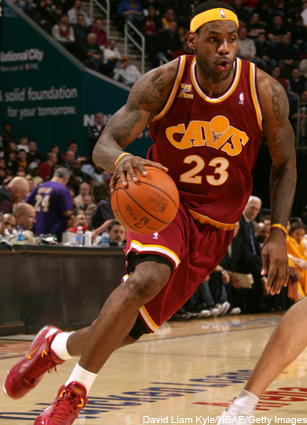 I can sum this one up to you with three words: “smiley face emoticon”

This came in text message form from the lovely Ryan Jones at 11:07 p.m. just after the Cavs defeated the Lakers, 93-87.

Want proof that this was a big game? Jones was awake and texting after 11 p.m. I kid, I kid. I’m not sure what time our guy normally goes to bed, but I do know I don’t get texts on the regular after Cavs victories. I can entirely understand why I got one last night. LeBron James was awesome. Not only did they sweep the season series against the Lakers, he got the W on a night when Kobe Bryant became the youngest player in NBA history to reach 25,000 career points scored.

Damn. You know that’s not how Kobe saw this one unfolding.

Most importantly, LeBron was huge down the stretch. Like down, down the stretch when the Cavs needed him. A block, a board, a layup. He was all over the floor, brought so much energy and it was fun to watch.

He was 1-for-9 from deep with his eight misses clanging all over the place and I think I’ve figured it out: He jacks threes so that he is reminded with each clang that he is indeed mortal like the rest of us. Let’s be serious: If he were making threes, too? It would be over.

The game was just fun. It also made me realize, I just love competition. Fire. Talent. Greatness. Whether it’s Kobe, LeBron, whoever. We’re lucky we are witnesses to all of this. I felt for Kobe with that stupid finger all taped up. I loved seeing LeBron jump over the Lakers bench for a loose ball and then give a fan a hug before getting back to business.

Also… Um, somewhere along the way in the second half, the Nuggets turned their game against the Clippers into a blowout, winning 105-85. Melo had 28 points and 10 rebounds and, yeah. There’s no denying that the game of the night was the one in Cleveland.

P.S. Brandon Jennings, Andrew Bogut and the Bucks are in town today. Pretty happy girl over here. Looking forward to this game and then catching the Lakers on Sunday. Big weekend, starting with my favorite new kid on the block and finishing with the greatest in the game today (or, uh, one of them).

Have a great weekend, everyone. Catch you Monday!