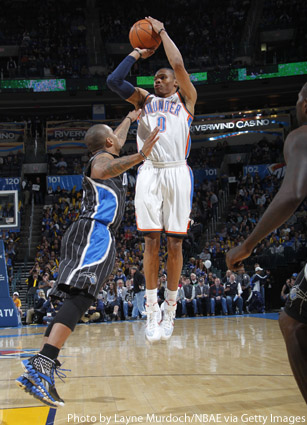 We haven’t seen the Thunder at their very best too often this season, but when everything is clicking, the team’s damn tough to slow down. Last night OKC was on point, led by Russell Westbrook and his 32-10-13 triple-double. Russ was attacking the hole, feeding his teammates when they found openings, hitting jumpers, and doing just about all you could ask of an NBA point guard. On top of that, Kevin Durant was red hot, hitting 13 of 17 shots from the field and putting in 36. And the icing on top? Nenad Krstic, dropping 16 points and scooping 11 boards. (Worth noting is that Dwight Howard scored 39 and grabbed 18, but you know how that goes. OKC tends to struggle with big men, and Dwight Howard is a very big man.) The Thunder were leading for the majority of the game, though the Magic threatened late, before a wild Jeff Green three and a cool Durant J shut them out. If Scott Brooks’ guys can build on this, and keep this kind of play up, there’s little doubt they could shoot up the standings in the West. Easier said than done, perhaps.

Most readers around here already know that Kevin Love inhales boards like one of those ridiculous eating champions does hot dogs. That’s been established. Step two? To match that rebounding ability with some scoring prowess, a prowess we saw on full display last night. Love went for 35, and even found his outside touch, drilling 5 threes. If this guy doesn’t make the All-Star Game, I’m gonna—I don’t know, be really upset, or something.

Anyway, Love’s points, rebounds (he snatched 11) and leadership propelled the TWolves over the Wizards, who actually made a valiant effort: they scored 97 points off 47.4 percent shooting from the floor. John Wall scored 14 and dished 10, but to no avail, as Love and friends were all business. Absurdly, the Wiz still haven’t picked up a single win away from their homecourt, and they’ll next look to finally break that road virginity on the 19th of January, in Milwaukee.

Here’s some breaking news: The Miami Heat ain’t too strong without that LeBron dude. Not that big a deal; I think everyone assumes they’ll be pretty screwed if he goes down longterm, anyway. The Nuggets ran all over the Heat in this one, going up big in the second quarter and bringing a 17-point lead into half. They built on that in the third, and by the fourth this one was a battle of the second (or third) units. Individual stats never mean much in contests when the starters play only three or so quarters, but it seems worth noting that Denver shot 7.7 percent better than Miami. And JR Smith, seemingly just because, played hard through the end of the 48th minute, finishing with 28 points and 8 treys. The Heat have another tough one in Chicago tomorrow night, and hopefully, for their sake, they’ll have LBJ back for that.

Moment of the Night: Gotta be the three-pointer Jeff Green hit as the shot clock hitting 00s in the close game’s final couple of minutes. Will update with video when/if that’s a possibility.

Enjoy the weekend, SLAM Fam. Anton’s got you for the next two, and I’ll be back Monday morning to recap Sunday’s excitement. See ya then.