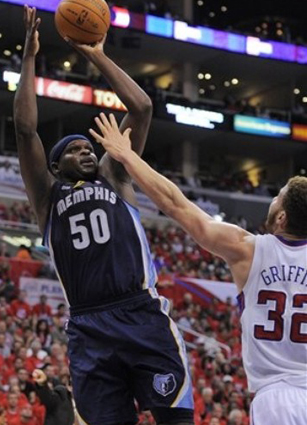 LA had an eight point lead with eight minutes left and then the Clippers showed up.

No, they didn’t show up, like arrived or took over. The Clippers we all know and love from the last two decades showed up and spit relapse juice into the punch bowl.

They lost 90-88 to Memphis. The Clippers had three chances to advance in this series with a win and now they’re down to one.

It wasn’t a routinic, “Oh, we just couldn’t stop this run” sort of thing. It was a series of stupid errors, turnovers and careless plays, and all of it was topped off by straight up giving up at the end.

Oh, and the coaching sucked, too.

Again, the Clippers were up eight with eight to play. Then Space Jam extra Hamed Haddadi snuck an offensive rebound putback on a missed free throw and all hell broke loose.

The Clippers had been propped up by a bench that was overachieving at all the right times. Eric Bledsoe had 14 and 6 with a lot of head-dipping, slashing, and general gutty play. Ditto Kenyon Martin, who played with an interminable gall in the first three quarters. He was a five-for-six on almost all aggressive plays and layups.

Then that all very quietly decided to stop after the Haddadi rebound. Nick Young was still in this game, for some reason. Del Negro abandoned throwing the stronger Martin on Rudy Gay—really the only tactic that’s worked on Gay late in games—and stuck with Young, who was effectively and immediately declawed.

Gay scored the next five points of the game. No changes were made.

Sometimes baggage is real. When that, “Aw, jeez, not this s–t again” hush comes over the crowd, you can’t tell me otherwise.

Everyone rightfully picked against the Mavericks last year in every round of the playoffs because they had done this—no joke—exactly ten times before. They figured it out on the 11th.

This is the Clippers’ first.

Of course Randy Foye would step out of bounds when no one was ready for a rebound on a missed free throw. Of course the team would stop paying attention and forget to foul, up two after a missed three with 4 seconds left.

These are the Clippers. Don’t forget that.

When old habits don’t die hard, they don’t die at all.