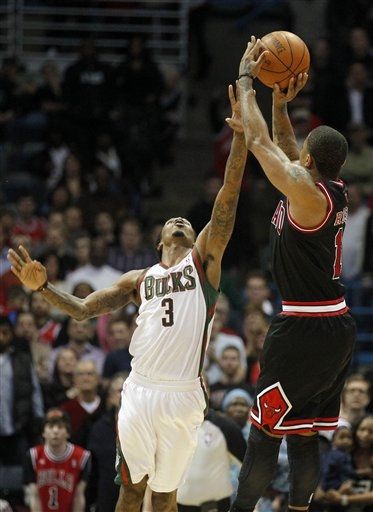 Good morning, world! I warned you this morning’s Post Up would be condensed, so here goes. For once As usual, I’m leaning on you, the readers, to drive the conversation on last night’s action. Man, I sure picked a heck of a night to go off the grid, huh? I thought the game I was covering would surely be the best ending of the evening. And then I caught up on the action around the League. Holy buzzer-beaters, Batman! Without further interruption, let’s get to today’s modified TPU, a bare bones edition (keeping this on a need-to-know basis, boys and girls) from a night that gave us plenty to chew on. Luckily for me, a handful of games require only a few seconds of game-ending video.

In short: Toronto shot an insane 59 percent on field goals and set a season-high for points scored, behind 23 points from DeMar Derozan. Jose Calderon added 17 points and 12 assists, as the Raps won despite sending Houston to the free throw line 44 times—the Rockets made 13 more free throws than Toronto attempted on the night.

In short: Boston shot 35 percent from the field as a team, including going 0 for 8 from downtown, and the Sixers asserted their Atlantic Division authority. Paul Pierce led the Cs with 16 points, but only 3 players in green scored 10 points or more. Philly outran the Celtics (26-10 fast break points) and led the entire way in this one, by as many as 37 at one point.

In short: OH YES. Despite a boatload of front-running Lakers fans, the Wizards came all the way back from down 21 points in the third quarter. And considering that John Wall had just 4 points on 1-8 shooting, it’s safe to say Kobe Bryant (30 points) and the Lake Show got beat by a bunch of guys he’s never heard of. Kobe was 1-10 in the fourth quarter, while the likes of Trevor Booker, Kevin Seraphin (career-high 14 points), Roger Mason (14) and Nick Young (19 off the pine) led DC to the win. And consider this: The Lakers have dropped consecutive games to Detroit and Washington. Meanwhile, the Wizards have 9 wins. Two of those are against the Lakers and Thunder.

Best line: Trevor Booker has got to be among the most underrated guys in the L. Cook Book led the Wizards comeback and finished with 18 points and 17 rebounds in 38 minutes.

In short: One night after handling Dwight Howard, the Bobcats had a whole lot of trouble with Al Jefferson and friends. The Jazz outscored Charlotte 54-36 in the paint and outrebounded the ‘Cats, 43-34 to get back to .500 at 19-19. Corey Maggette scored 25 points and Kemba Walker had 19 in the loss.

In short: This game was tied at 77 with 4 minutes left, and Jannero Pargo cut a Miami four-point lead in half with 30 seconds left, but a Dwyane Wade-to-Udonis Haslem alley-oop with 12 ticks to play gave the Heat a 3-point advantage, and Pargo’s buzzer-beating trey was off the mark.

In short: A guy I know wrote a nice recap of this one for NBA.com, but here’s what you need to know: Deron Williams passed out of a double-team on New Jersey’s final possession and Jordan Farmar drilled the game-winner with under a second left (see below) after the Nets blew an 18-point lead. Also, props to Kris Humphries for manning up against Blake Griffin.

Best line: Even on a night when Griffin didn’t look all that great (besides physically—dude is borderline breathtaking in person), he still muscled his way to 28 points and 17 rebounds.

Best line: Derrick Rose’s 30 points, 11 dimes, 8 rebounds, and the game-winner you see below. Have mercy, Derrick.

In short: Just peep the stat lines: James Harden had a career-high 30 points, Russell Westbrook had 31 and 10 assists, Kevin Durant had 30, and Serge Ibaka put up 18 points and 20 rebounds, plus 3 blocked shots.

Best line: Oklahoma City only had one player score off the bench. That’s okay when your one guy is James Harden, who was 8-12 from the field, and for what it’s worth, finished with a +27 plus/minus.

In short: Minny’s won 5 straight games at home and 8 of 11 games overall, sliding them into the No. 8 seed in the Western Conference, last night picking up the W despite 22 points from LaMarcus Aldridge and a near-3×2 from Gerald Wallace (13-9-9).

Best line: Kevin Love dropped a 29-16-3 line. He’s so good, someone ought to put him on the cover of a magazine…

In short: New York has lost three straight and 6 of 9 since Carmelo Anthony joined the Linsanity. Melo had 27 points, Amar’e had 18 and 11 boards, and Jeremy Lin scored 20 points, had 4 assists and only 1 turnover, but the Spurs had 7 players in double figures and led by as many as 24. Tyson Chandler didn’t play (hamstring) and Landry Fields was replaced in the starting lineup by Iman Shumpert, but this one was all San Antonio.

In short: Your ROY favorite Kyrie Irving (18 points, 8 dimes, 5 rebounds) went the length of the court for a layup with 4 seconds left on the clock to down the Nuggets, as you’ll see below. Which shouldn’t be all that surprising, since Danilo Gallinari and Denver made odd choices on defense all night.

In short: Is there a more perfect example of a play that sums up the Hornets’ season than the game-losing botch job you see below? All New Orleans had to do was inbound the basketball. And they couldn’t. Isaiah Thomas stole the ball and hit John Salmons for the game-winning bucket.

In short: Memphis jumped out to a 21-4 lead, then let the Warriors back in the game before building another 20+ point lead late in the game. The Grizzlies racked up a ridiculous 32 fast break points, to just 6 for Golden State.

Best line: Rudy Gay went for 26 points, 12 boards and 5 assists for the Grizz, who shot 53 percent from the field as a team.

Tonight: Pretty simple—Magic at Bulls at 8, Mavericks at Suns at 10:30, both on TNT.