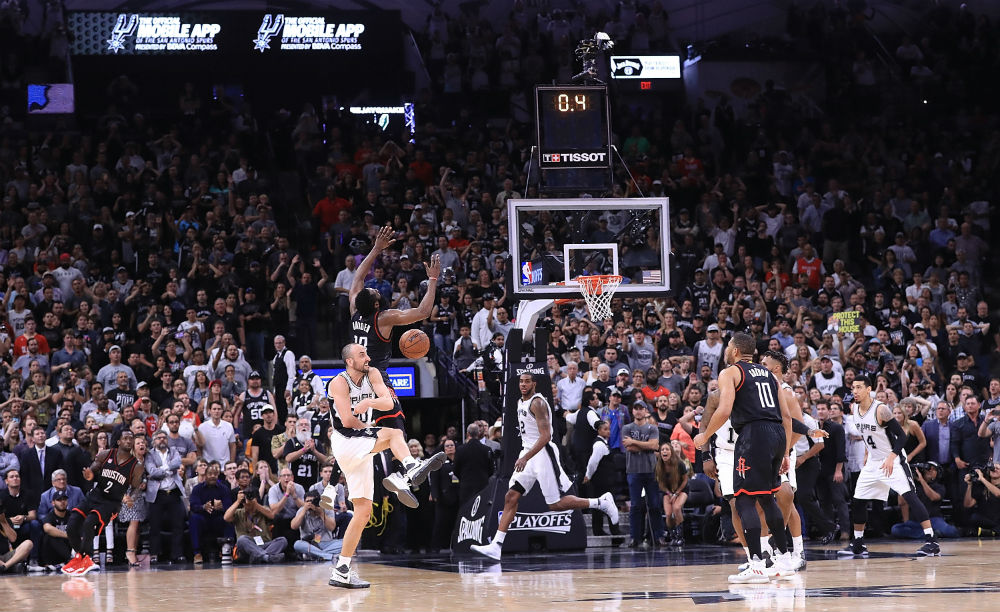 Finally… we got a close one. This might have been the best game of the playoffs so far.

With 11 seconds remaining in regulation and the score tied at 101, James Harden was called for an offensive foul, giving San Antonio a chance to win it. But they couldn’t capitalize:

Replay Review (Washington): if Mills’ made FG was released before time expired in Q4 of #HOUatSAS. Ruling: Confirmed, no basket. pic.twitter.com/9qUD8qDQ1t

After hurting his ankle, Kawhi Leonard (22 points, 15 rebounds) wasn’t in on that final possession, and didn’t play the entire overtime period.

Pop said Kawhi didn’t want to come out. “It was obvious he couldn’t go.”

This one was all about Manu Ginobili (12 points, 7 rebounds, 5 assists), who turned back the clocks with an incredible performance. The vet was not only dunking on people, but also had the game-saving block on Harden.

The Beard had a triple-double (33 points, 10 rebounds, 10 assists), but turned the ball over nine times.

Both teams struggled offensively in the 4th quarter and OT, combining for 46 total points. San Antonio (and Danny Green specifically, who scored 7 of the Spurs’ 9 in the extra period) just made more plays down the stretch.

Game 6 is Thursday at the Toyota Center.