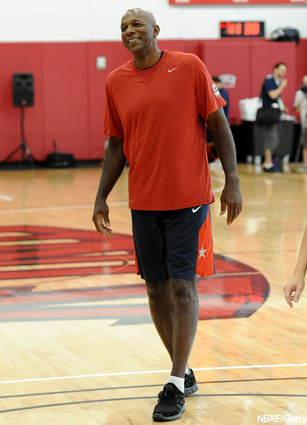 by Adam Figman and Abe Schwadron

Early Friday morning inside the New Orleans Morial Convention Center, before the doors open at the NBA All-Star Jam Session and hundreds of fans begin arriving, Clyde “The Glide” Drexler walks off one of the many mini-courts set up. Save for his attire—now more appropriate for his Rockets TV broadcasts than his playing days—he still looks like if a stander-by flipped him a ball, he could throw it down with ease.

“I could,” he tells us after grabbing a muffin and a cup of coffee, “but then I’d be out for about two weeks. I’d need a stretcher tonight, and it’d really mess up my golf game. I can still dunk, but it hurts when I land.”

Funny, since over his Hall of Fame career, which included 10 All-Star appearances and an NBA title in ’95 with Houston, Drexler was usually the one putting a hurt on any defender brave enough to meet him at the rim. One of the best in-game dunkers of all-time, Drexler participated in the Dunk Contest fives times between 1984 and 1989, but never won. (He ran up against a couple dudes named Michael and Dominique.) So we talked with The Glide, thanks to an alley-oop from Sprite, about his favorite All-Star Weekend memories, which players he’s keeping a tab on these days and plenty more.

SLAM: Do you have specific memories from the five Dunk Contests you participated in?

Clyde Drexler: A lot of great memories. The first one was ’84, my rookie year. If you look at the talent of the guys in that contest—you had Orlando Woolridge, Michael Cooper, Dominique Wilkins, Julius Erving, Larry Nance, myself—those are pretty good players, as a well as dunkers.

SLAM: Do you have all-time favorite dunkers?

CD: Many. My favorite, probably the most impressive dunker to me when I was competing, was Dominique Wilkins. He could get up so high and do so much—he was just fun to watch. I looked forward to competing against Dominique but I loved watching him dunk.

For me, dunking was always about whoever’s under the basket—I wanna dunk on him! It wasn’t just the fact that you’re dunking. But now it’s evolved, because you have all the props, you have guys dunking over cars. I wish we had thought of something like that back in the day. We could’ve been really creative. But you know, it really has evolved. I’m proud to say that the young guys have that love and the good players are still participating in the Slam Dunk Contest. Think about it, if LeBron James competed, that would be phenomenal. I’d love to see DWade and LeBron compete.

SLAM: Think LeBron and Wade could still do it?

CD: Oh, absolutely, if they wanted to.

SLAM: Why do you think LeBron is hesitant to participate?

SLAM: The new team format has three dunkers in each group. If it was like that when you were in the Dunk Contest, if you could choose any two guys as teammates, who would you want?

CD: The East was loaded back then. I mean, in the West, James Worthy was a high dunker, but he wasn’t a Slam Dunk [Contest] kind of guy.

SLAM: What if you could pick any two teammates from basketball history?

SLAM: Do you have favorite memories from All-Star Weekend?

CD: Yeah. I’ve been a part of All-Star Weekend since 1984. Thirty years! Woo, I’m getting old. Really, I haven’t missed very many, because now my kids love All-Star Weekend, and I come just as a fan. I have four kids, and they grew up with, so they always want to continue to go. So it’s a great part of our family culture, our family history. It’s bonding time with my kids. So I can’t imagine not going to All-Star Weekend. As an NBA fan, it doesn’t get any better. There’s something for everyone, whether you’re a fan of the All-Star Game, the Shooting Stars, the Skills Competition, the young guys. You’ve got something for everyone. And my favorite part is the Sprite Slam Dunk Contest.

SLAM: Some of the guys participating now probably grew up watching you play. Are there any NBAers who remind you of yourself, or that you can tell were influenced a little by your game?

CD: Yeah, like when I watch DWade and I watch how he makes his moves offensively—real slick, real smooth—it reminds me a little bit of my game. I watch LeBron in transition, how explosive and how powerful he is taking off—a lot of my game. Guys like Russell Westbrook, the quickness on defense and how they get a steal and convert that to offense real quick, that was a lot of my game. So I see it from time to time.

SLAM: Who are your favorite players to watch these days?

CD: I like watching those guys that I mentioned. Also Kevin Durant, Carmelo, just phenomenal players. I do the Rockets TV broadcast, so guys like Dwight Howard, James Harden, phenomenal players night in and night out. I really appreciate their efforts. LaMarcus Aldridge, Blake Griffin, Chris Paul. It’s hard not to like those guys. The guards in Golden State—[Stephen] Curry and [Klay] Thompson, phenomenal to watch. And that’s what the NBA is all about. Because you know when we played, we had a lot of guys on every team who could embarrass you on any given night, so I think it’s back to that because the talent level has picked up tremendously. Think about it: We’ve got the Raptors in third place in the Eastern Conference, with young good players like Terrence Ross and DeMar DeRozan. Rising stars. And that’s what the game has always been about, on top of the more established stars, like LeBron, Kobe, DWade, Durant and Carmelo. It’s fun to have that mix of young and old, because the game is always going to continue to evolve.

SLAM: There’s been a lot of talk about LeBron James naming his NBA Mount Rushmore. Who would be on yours?

CD: Who were his guys? He said Oscar Robertson, Michael, Magic and Larry? That’s a pretty good Mount Rushmore. But I’ve got some guys that would contend with his comments. I guess he just left the big guys off, guys like Wilt, Russell, Olajuwon, Kareem. Because those guys would be a Rushmore themselves. I think you’ve got to go by position if you’re going to do a Rushmore, because it’s going to always be a lot of arguments. And quite frankly I’m disappointed he left me off [laughs]. But LeBron is a phenomenal player, and he’s entitled to his opinion. I appreciate him because all he does is produce. Under all the intense pressure, he continues to impress, not only his teammates but fans and people around the world. I’ve watched him since he came out of high school, and I’ve liked everything I’ve ever seen from him, because as a player, he’s humble, he’s complete, he’s unselfish—there’s nothing not to like about his game.

SLAM: LeBron also said he’ll be in the Top 4 one day. Do you agree?

CD: He’s the best player in the game today, by far. But Durant is a close second. Close second. LeBron is phenomenal, and you can’t argue with his accomplishments. He could be at the top of that Mount Rushmore. But that’s for other people to talk about, not for him to talk about [laughs]. As a young player, he’s got to motivate himself somehow, and that’s a great way to do it.

SLAM: Do you think guys are too friendly with each other in today’s NBA?

CD: You hear some of the old guys saying how these guys love each other. It’s a good thing to respect your competition. When we played, we didn’t kiss and hug guys after games. As a matter of fact, we wanted to choke them [laughs], but we certainly respected their game. It’s a different culture now.

CD: Are you kidding? Don’t ever call me. We were fierce competitors. We respected each other and now when we see each other as old men, we have the greatest times ever. But back then, you couldn’t stand those guys. I’ll give you an idea of how we felt: Cedric Maxwell of the great Boston Celtics, he said he hated the Lakers so much, that if he had seen any one of their guys stuck on the freeway and his car is stopped, he said not only would he not stop to help him, he’d try to run over him. That gives you an idea of how much he didn’t like them. It was pretty much across the board, every team hated everybody on the other team, even if he’s a guy you played with in college—you probably got together after the game, but while you’re on the floor, you want to beat him. You definitely want to beat him.

SLAM: If Twitter and Facebook existed when you were playing, who would have been the most annoying guy on social media?

CD: It’s hard to imagine. I gotta say Gary Payton, The Glove. He can chat it up a little bit. I think he would have been the most annoying [laughs].