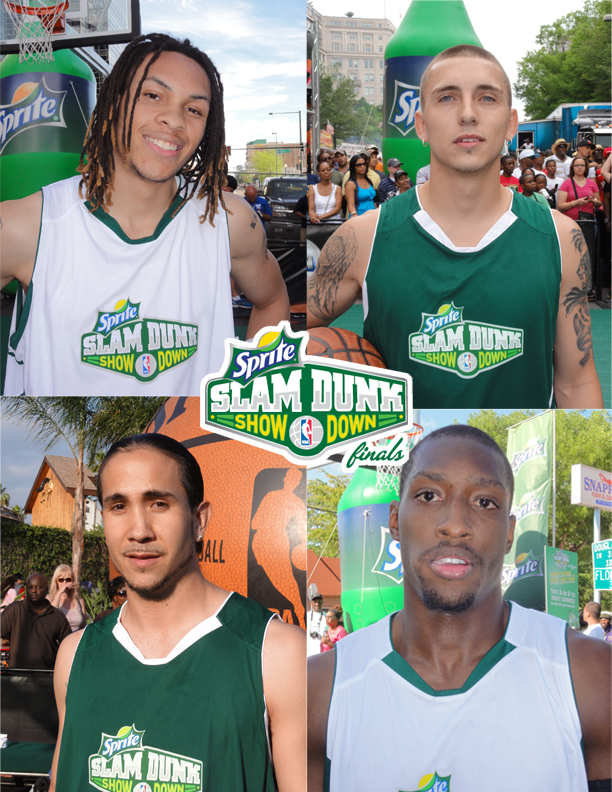 He was running mates with Julius Erving and tore down a few a backboards in his day, but Darryl Dawkins hasn’t had his fill of the dunk life. Chocolate Thunder strives to continue educating us on the artistry and evolution of the slam dunk. “Some of the stuff where the guys are putting the ball between their legs and spinning and some of the timing, where they’re catching it off the bounce is just unbelievable,” Dawkins says. “I was known as a power dunker—someone who wanted to dunk one somebody! Doc could glide to points he wanted to glide. He’d be at thirty thousand feet and you’d be lifting off and losing altitude fast. But some of these guys today can flat out go!”

During All-Star weekend in Orlando, Dawkins, LeBron James and singer J. Cole (who will also perform prior to the event) will serve as judges for the Sprite Slam Dunk Showdown, a contest featuring amateur dunkers from across the land competing for a $10,000 prize. The event will be streamed live on NBA.com and will feature four finalists:

·         Kenny Dobbs, 6’3” a.k.a. “K. Dobbs” – We featured the 26-year-old Dobbs career in the dunk game last summer.  Hailing from Phoenix, Ariz., Dobbs is an 11-year dunking veteran who won the semifinal competition in Los Angeles. He was also a finalist at last year’s Sprite Slam Dunk Showdown finals at NBA All-Star 2011.

·         Michael Stewart, 6’1” a.k.a. “Airdogg” – Stewart, 28, comes out of the City of Angels and brings an impressive 15 years of dunking experience to the Showdown. He solidified his spot in the Showdown through the online competition by uploading his dunk clip to NBA.com/dunk.

SLAM: Have you enjoyed being involved with the Sprite Slam Dunk Showdown?

Darryl Dawkins: It’s been unbelievable. We went to eight different cities and selected the winners there. And the guys who couldn’t get there were able to put their dunks online at NBA.com. Ten thousand dollars is a big prize to be fighting for. Anyone who don’t want $10,000 in today’s economy needs to have their head examined. [laughs]

But it’s been fun going to the cities and rubbing elbows with these dunkers. And it’s been a real pleasure—I will continue to do this as long as it’s going. It’s unbelievable some of the stuff they do. They are hype! It’s their last chance to make the big dance and they really get involved. They bring it all out. In a slam dunk competition, you don’t always wait to pull out your best dunk last because you may not end up getting there. You better come out the door funking for Jamaica. Believe me.

SLAM: Are you allowed to have a favorite in this contest?

DD: I’m not. You know why? I want to keep my brain the way it is—free. I like the way it is right now. You’re going to see some stuff you haven’t seen before.

SLAM: You had a very interesting career in the NBA, entering the league straight out of high school in 1975.

DD: It wasn’t very popular then. Moses Malone had done it before me but he went to the ABA first. I was the first guy to go from high school to the NBA and that usually kills people if it’s a question in trivial pursuit. I still own that title along with the most fouls in one season. I’m known for that. For me, the most difficult thing was being away from my family, all of my brothers and sisters. I had to grow up quick. I had to learn how to drive in the snow—I had never even seen snow. World Free was the guy who taught me how to drive in the snow in Philadelphia. We had good guys on the team in Doug Collins, Harvey Catchings, Clyde Lee, Leroy Ellis, Mad Dog Carter—people hardly talk about these players. These guys walked me through it. Not to mention another influential lady named Zelda Spoelstra who grabbed me by the arm and told me, ‘Hey, this is the way it goes.’

SLAM: Did she work for the organization?

DD: She worked for the NBA. She is a fantastic lady. Fantastic!

SLAM: Did you ever consider going to college or were you set on going straight to the NBA?

DD: I did consider going to college. I had a teacher named Julie Brown who prepared me to go to college. I was leaning towards Florida State or Kentucky. Really, it was those two schools. But my dream was to play NBA basketball. My mother and my pastor at that time said, ‘Hey, if you want to try this, we are behind you 100 percent.’ It just worked out for me. I was blessed.

SLAM: You’ve always had such a great personality—someone that is always smiling, has nicknames for his dunks and drops incredible quotes. What were you like as a kid?

DD: I always had a very wild imagination and it has never left me. It is still here. Anybody whose mother calls herself “The Great Harriet” and father was named “The Fantastic Frankie” had to have some imagination. And I was one of 11 kids. I always had a good time playing the game. I believed in entertaining people.

SLAM: Many talk about how great Clyde Frazier’s style was. Do you feel like you’re underrated in that department?

DD: Man, I’m waaaaaay underrated. You know why? Because big guys wear black, blue and gray—that’s the only colors they make. Me, I wear anything from pink to leopard. Growing up, they would tell me they don’t have it in my size, you won’t look good in it and you can’t wear it. I swore to myself if I ever made some money, I would wear whatever I’d want to wear and whatever color. I enjoy it, man. At All-Star, you wear something that nobody would ever wear. I’ve had people come up to me and tell me they couldn’t pull it off, ‘but you can big fella.’ Not only do you gotta wear it, you gotta talk the talk and walk the walk. Some people are going to come up to you and say, ‘Man what you got on! I wouldn’t ever wear that.’ Then you have others that might say, ‘I’m feeling you big boy! I’m feeling you!’ And that’s all you need, that one person to feel you and you keep doing your thing. If somebody got the same thing on that I got on, I’m going home to change it because ain’t nobody wearing what I’m wearing.

DD: My closet looks like a bag of skittles. I like to be able to get through my closet with the light off. [laughs]

SLAM: Who are some of the players in the NBA that you enjoy watching today?

DD: I enjoy watching all the young players. Naturally, I enjoy watching Kobe and LeBron and these guys. I also enjoy watching guys like Durant and Westbrook and Derrick Rose. They come out and put it out each night. I enjoy the games. I’m one of those guys that will try to watch four games at one time. Because I like action and I like to see it going on. Basketball is the biggest thing in my life. I do believe in God but I love basketball so much, man. My pastor told me once, ‘I’ve got to preach fast today because the game is on at two o’clock.’ I remember saying, ‘How can you say that?’ And now I find myself being more and more like that. The game makes me feel good.

SLAM: Many NBA fans that grew up watching the game in the 70s and 80s have such great respect for The Doc and really enjoyed what he brought to the game. What can you tell me about him?

DD: Doc lived by example. A lot of guys do a lot of jaw-jacking, gum-bamming, lip-smacking. Doc lived by example. I remember when we were in Philadelphia and he was just getting his groove together, he had just come over to us. He was out-running and out-jumping everyone back then. After practices, he would go out and run around the track. I remember specifically coming over to him one day and saying, ‘Doc, what you running around the track for?’ He said, ‘Man, I’m about four pounds too heavy.” And me, my plate itself would weigh four pounds! Doc could glide further than anybody and was one of the greatest leaders. He didn’t do a lot of talking. It was like, ‘you do what you see me doing and you’ll be doing the right thing.’ I still love Doc to this very day, man.

SLAM: Thank you so much for the time Darryl. It was so much fun speaking with you.

DD: It was my pleasure. I’ll be looking for ya.