The Cavs' guard talks about his relationship with LeBron, the Cavs' season-opener and friendship with Jimmy Butler. 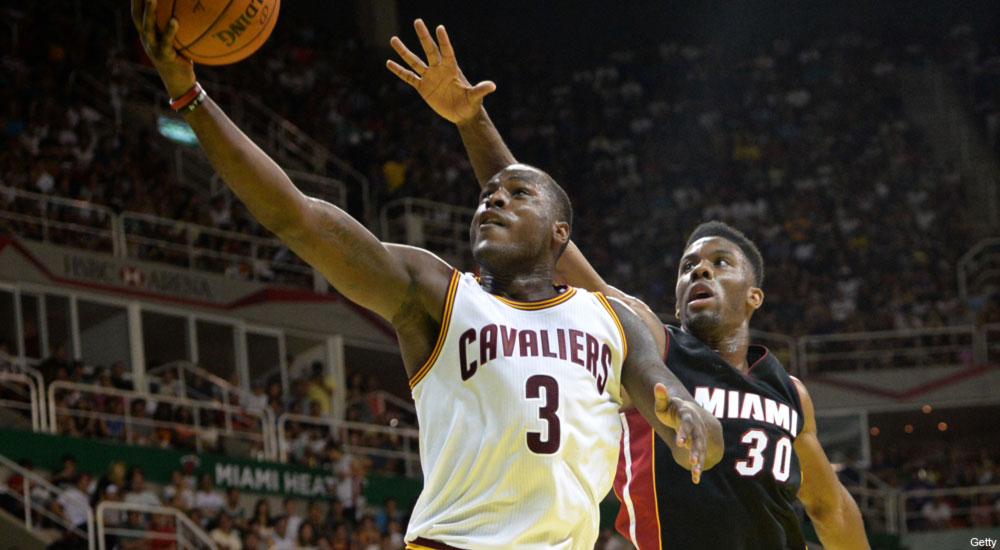 As a new LeBron James Nike banner unfolds across from the arena, and the chalk flies once again at half-court, Dion Waiters will begin his third season with the Cleveland Cavaliers.

The 2012 fourth overall pick from Syracuse will be playing for his third coach in as many years, now under the tutelage of Euroleague legend David Blatt. On a roster with Mike Miller and Shawn Marion, Waiters will be rounding out a starting five that now includes James as well as Kevin Love. He’ll take the Quicken Loans Arena floor with the NBA community watching additionally flanked by teammates and friends, Anderson Varejao and Kyrie Irving.

SLAM caught up with Waiters on Wednesday, roughly 24 hours before tip-off, for a few thoughts on all that.

SLAM: It’s the night before the home opener. You’re starting alongside LeBron James and Kevin Love. Playing opposite Carmelo Anthony and the New York Knicks. LeBron makes his regular-season return to Cleveland. What’s going through your head right now?

Dion Waiters: I’m just excited. I know it’s just one game of an 82-game schedule, but I’m really excited. I’m trying not to think about all that for a while though, because I’m not trying to get too excited. So I’ll just be watching these games tonight, relax for right now. I’m a laid back kind of guy by nature. But when you consider our last couple years, what we experienced as a team. What the fans experienced. It’s hard not to get excited. I know right now it’s time to just seize the moment.

SLAM: During the preseason, LeBron has been on record as saying he’s taking you under his wing. Helping you grow as a professional. What are you guys talking about, how has your relationship been with LeBron?

DW: It’s been great. We’re just pretty much talking a lot. I talk to him about everyday life as well as things on the court. I’m just trying to be a sponge and soak as much up as I can from being around him. I want to learn from him, and he’s basically been a great mentor for me—since day one. He was a mentor for me last year, too. I used to text him and ask questions about different things. Then when he was coming here, I knew I had a great opportunity to learn from the best. So I’ve just been trying to take advantage of being around him.

DW: Just when to take a shot, or when not to take a shot. I feel like I do understand how to be efficient. Some of those shots in the preseason, LeBron and Kyrie weren’t playing in those games. I wasn’t on the floor with all three of those guys for all those shots. But I am learning. I know I need to take the correct shots in the heat of the moment this season. And I know I’ll be where I need to be.

SLAM: Thursday is the Knicks, but then Friday you’ll be in Chicago. The Bulls are expected to be a top team in the Eastern Conference. What do you look forward to when you matchup with the Bulls?

DW: I always look forward to playing against Jimmy Butler. He’s a good friend of mine, and one of the best shooting guards in the NBA. He’ll be out when we play them on Friday because of his hand, but I know he’ll be on the bench just talking. Talking the whole game. So it will be fun to play out there, listen to him talking, and let him know I can’t wait for him to come back.

Brendan Bowers is an NBA writer who covers the Cavaliers and the NBA in Cleveland for SLAM. Follow him on Twitter @BowersCLE.