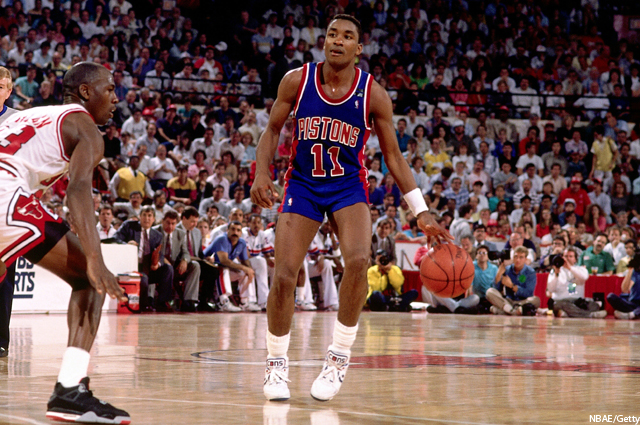 “Hey Peter, sorry for calling you late. I was held up on another call.”

The voice on the other end is soft, welcoming and oozing with politeness. It also happens to belong to one of the 50 best players to ever pick up a a basketball. When Isiah Thomas called me late last week, I went through feelings of anxiety, excitement, joy and captivation, all in the span of a 20-minute conversation. So much has been written and said about Isiah—both good and bad—that I didn’t know what to expect when I finally got on the phone with him. But he was nothing but courteous and patient with his time, the complete opposite of how he played the game.

As a 6-1 point guard, Zeke was ruthless, nearly single-handedly turning the Pistons into a contender. Constantly playing in the shadow of Larry Bird, Magic Johnson and Michael Jordan, Thomas played with a chip the size of the Golden Nugget on his shoulder and led a Pistons team that played with unprecedented physicality to multiple NBA Championships.

The on-court Isiah vs. the off-court Isiah is what makes him one of the more fascinating figures in basketball history. His stint on the sidelines and in front offices has been well-documented and while others would be have trouble finding jobs and maintaining a high-level of respect with such a checkered history, Thomas remains a prominent figure, appearing as an analyst on NBATV and constantly in the conversation for various front office gigs around the Association.

Tonight, ESPN is premiering Bad Boys as part of the channel’s excellent 30 For 30 series. The film tells the story of the Bad Boy Pistons from the perspective of those who lived through it, featuring amazing footage and interviews with Rick Mahorn, Dennis Rodman, Bill Laimbeer and Adrian Dantley. Thomas is the star from the moment the film starts—beaming with an ear-to-ear grin as soon as he sits down in the interview chair—and just as he was on the phone, Thomas is courteous and patient with his time throughout the film.

SLAM: ESPN is premiering a 30 For 30 film on the Bad Boy Pistons tonight, which you are heavily featured in. What was your role in the production of the film?

Isiah Thomas: My role was to try and help facilitate the conversation with the players and try and give as much information about that time and our team as I possibly could. Not only what was going on in the game of basketball but also what was going on in society at the time. I tried to put all of it in proper context so when [ESPN] was telling the story, they could tell it from a league standpoint, a societal standpoint, and what we were going through as a team personally.

SLAM: It’s been 25 years since that team split up. Was it fun to look back at those clips and get back together with your former teammates and relive the experiences you had?

IT: We all stay in pretty close contact so it was great to be able to put our voice around this story. For so long, we could never get our voice on the story into the mainstream. The story of the Detroit Pistons and the Bad Boys has been told by others in terms of what they thought of us and this is one time where people will have the opportunity to see who we really were as men and as a team—our voice had been muted for so long. This film gave us an opportunity to just sit down and talk and articulate our point and where we were coming from, not necessarily where people said where we were coming from.

SLAM: Why after 25 years are the Bad Boy Pistons still relevant today? What makes the team so enduring and alluring?

IT: Probably because we were fighting against all odds. We were definitely swimming upstream through a league that had been dominated by the traditional powers in the Celtics and Lakers. We were a team that wasn’t invited to the party and crashed the party, so to speak (laughs).

SLAM: Is the film a fitting tribute to Chuck Daly?

IT: I think it’s a fitting tribute to the Pistons organization, Chuck Daly, Jack McCloskey and everyone who was a part of that era. It was a hard time but it was a special time because what we did and how we broke through still affects the game today. When I came into the League everyone was moving towards the 6-8, 6-9 point guard a la Magic Johnson and everyone had to have a post-up center that played around the basket. When you look at the game now, the centers step out and shoot the 3-point shot a la Bill Laimbeer and most of the teams have small point guards, as opposed to 6-8 and 6-9 point guards.

We won Championships primarily running a pick-and-roll offense, which is the way the game is played today—our schemes are still implemented and replicated. We had profound changes on the game, not only on the court but off the court. The way teams travel now and have charter planes and the upgrades in hotels, we definitely upgraded the living situation off the floor. We were the first team to experiment with shooting shirts and a third uniform and third color. The innovations and marketing we brought to the game has had a profound impact on the League and the game today.

SLAM: The physicality with which you guys played isn’t seen in the League anymore today. Are you surprised how much the game has changed in the past 25 years?

IT: They called us the Bad Boy Pistons but we emulated the Bad Boy Celtics (laughs). They were the physical team and Philadelphia was physical—the whole league was physical. It was just the way the game was played then. The way the game has changed now, it’s definitely a game that doesn’t have as much contact and definitely favors the offense more than it favors the defense.

SLAM: What kind of impact did the Bad Boy Pistons have on society?

IT: We represented the underclass and the Lakers and the Celtics represented the upperclass of the basketball society, they were royalty. We had a cast of characters on our team that were the underdogs. You look back now and there’s been two Bad Boys films and a company called Bad Boy. We definitely left our mark.

SLAM: From an analyst’s standpoint, what’s your take on all of the tanking that goes on in today’s NBA?

IT: In terms of what is described or labeled as tanking, some organizations understand that during this period of time, particularly this late in the season, you like to have the chance or opportunity to look at some of your younger players that haven’t had the opportunity to play so you can evaluate them. If teams have decided at the start of the season that the season wasn’t going to be as fruitful as they hoped it would be then teams will try to make changes and trades during the season. I don’t think any team or organization goes out to intentionally lose a basketball game. The other team may have more talent than you and consequently the results are the results, but I’ve never seen teams, players or coaches go out and intentionally try and lose a game.

SLAM: Do you think there’s a big talent gap in the League then? In the West, nearly all the Playoff teams won at least 50 games and in the East you have teams that barely cracked double-digit wins—do you think that’s a problem?

IT: It’s all cyclical and a lot of this has a lot to do with what you can call the “LeBron Effect” in the East. When LeBron was a free agent a lot of teams got rid of their talent to position themselves to have a shot at LeBron. Consequently, they got rid of years worth of players they built up and had to start all over again from a talent standpoint. Some teams have reloaded faster than others and other teams are still struggling.

SLAM: The level of point guard play in today’s game is amazing—are there any guys in particular that you enjoy watching?

IT: I love watching Tony Parker play—I think he has great command of his offense. He understands their schemes and their system. Chris Paul is very similar in terms of having a grasp and understanding his offense and what his coach his trying to get accomplished on the floor.

SLAM: Do you see any point guards in today’s game that are comparable to you?

IT: As you said, the level of play is fantastic so I’m honored to be in the conversation or compared to any of those guys. You can pick anyone and I’ll say, ‘Yeah, I’m good with that.’