Last night in L.A., fans lined up outside Revolve boutique as Brandblack and Jamal Crawford debuted the “Future Legends” J. Crossover 2—a limited edition colorway of Crawford’s latest signature sneaker that coincides with the brand’s apparel collection that drops in early 2015.

It was all smiles when Brandblack’s Global Ambassador and two-time Sixth Man of the Year award recipient entered the building to greet fans, pose for pictures and sign autographs. “It was exciting to know that this was possible,” Crawford said.

But the release of his second shoe just adds to the excitement that the 34-year-old Seattle-bred hooper is having in his 15th season in the League. On November 24, he passed Dale Ellis on the top-10 list of all-time for three-pointers made (Crawford needs 37 to pass Peja Stojavokic), and his 16 ppg make him a candidate to win back-to-back Sixth Man of the Year awards and his third overall (no player in NBA history has won the award three times—Ed.). Oh yeah, and despite a rocky start earlier this season, the Clippers have found their groove and have won nine out of their last 11 games.

SLAM caught up with Crawford to talk the J. Crossover 2, four-pointers, season accomplishments and more.

SLAM: You’re the master of the four-point play. What are thoughts about the idea floating around of the NBA possibly implementing a four-point shot?

Jamal Crawford: I’ve been hearing about that and I don’t know. I mean, I’m sure the game has to continue to grow and that would probably be the limit. I would never [want the NBA] to add a five-point shot, per se. A four-point shot is realistic because you can get fouled on a three-pointer, make a free throw and it’s worth four points. We’ll see how the game continues to grow.

SLAM: Would you be in favor of it?

SLAM: Your role is to come off the bench, but this season you’ve started a couple games. What’s that experience been like?

JC: It’s different. You just have to have a different mentality. I think when you’re starting, you can be a little more patient and don’t have to rush so much; when you’re coming off the bench, you have to make something happen almost immediately. It’s not immediately you scoring, just making something positive happen.

SLAM: Do you prefer starting or being a sixth man?

JC: It depends on the team. I think on this team, it’s perfect for me to come off the bench. I obviously always have Blake [Griffin] or Chris [Paul] or myself on the floor at all times. You know, we’re the three leading scorers, and I think with that, it gives our team balance. I think if you look at all the really good teams from [Manu] Ginobili with the Spurs to James Harden with OKC and Jason Terry with Dallas, any of those guys could’ve started but it would’ve weakened their team. I think the big picture just helps the team more.

SLAM: Is another Sixth Man of the Year Award on your list of achievements to accomplish this season?

JC: If it happens, it happens. I’m not really into that. I never played for awards—or acknowledgments, I guess. You’re as good as your peers think you are, you know. So for me, if it happens, that means we’re winning and I’m having a pretty good season.

SLAM: One thing you’ve never accomplished is being an All-Star. Is that on your radar this season?

JC: I told (Brandblack founder) David [Raysse] by the way, I’m better than I’ve ever been in the last two years [laughs]. It’d be cool, but I think when guys like—most people’s favorite player—I’m their favorite player. Which is cool to me because they all tell me that. Some of the biggest names in the game have said they wanted to workout with me or just pick my brain on different things, so I think that’s more important than people selecting me for the All-Star Game.

SLAM: Recently, you just passed Dale Ellis on the all-time three-pointers made list. Does that list mean something to you?

JC: Yeah, because that wasn’t something that I, you know, was trying to shoot for—no pun intended. That wasn’t something I was really thinking about. I was at a game in Seattle when Dale played there and had 9 three-pointers. And he did an interview on the court right after the game. I was actually sitting in the crowd listening to his interview. That wasn’t something on my list, but to think about all the great shooters—because I don’t really consider myself a shooter—but to think of some of the guys I passed like Dale Ellis, Kobe [Bryant] or Steve Nash; those guys are prolific shooters and I don’t consider myself as such, but a prolific scorer, so I guess it comes with the territory.

SLAM: Are you looking at passing Peja Stojakovic and other guys on that list?

JC: Nah. I want to get stuck in the moment. I just want to play and then let things fall as they may. I don’t want to say I’m shooting for this, this or that. That’s when you can kind of get in your own way.

SLAM: In the first six games of the season, the team went 3-3. You guys are now 13-5. What was it that sparked you guys to turn it completely around?

JC: I think people didn’t realize that I missed a month and a half last year, JJ Redick missed half the season and Chris [Paul] missed a month and a half. So in the retrospect, we had the same team, but it was a little bit different because everybody wasn’t healthy at the same time. Now we have everybody healthy so we’re working out the kinks. And I think going on that road trip was the best thing going for us at the time, because we leaned on each other and it was us against everybody else.

SLAM: The same core group of guys are still on the squad with some new additions that were acquired in the offseason. What’s the chemistry like on the floor?

SLAM: Who do you see as the top-three point guards in the NBA right now?

JC: Oooh! Top three? Well, Chris [Paul] has to be up there. Steph Curry—he’s playing well. I couldn’t nail it to three, honestly, because you got Kyrie [Irving], Derrick Rose, [Rajon] Rondo—you got a lot of guys. But, man, I’m not really sure I can do five. There’s some really good point guards. Chris is the only one I know for sure.

SLAM: A few days ago, you tweeted that Monta Ellis was one of the most underrated players in the League. Why’s that?

JC: I think sometimes people get so caught up in the hype that there’s something good right in front of you, but we’re always thinking what’s next? This guy or that guy because most people see that, but Monta is one of the most underrated players for sure.

SLAM: Anyone else you think is underrated in the NBA?

JC: Me [laughs]. Um, Monta is underrated. I think he jumps out at me immediately because our pasts are somewhat the same. We’re guys who can score and guys who can play in the box. Like, ‘cause everybody in the NBA is good, but there are some guys who are underrated players that just don’t get the hype. Al Jefferson should’ve been an All-Star by now, especially in the East, you know what I mean?

SLAM: Dejounte Murray, a Seattle kid who’s playing his senior season at your HS Alma Mater, and played with you in the Seattle Pro-Am this past summer has been compared to similar version younger of you. Thoughts on that?

JC: That’s my little bro and I can see that on and off the court by how loyal he is. You can see that for sure, and he’s a sponge. He wants to get better and better and he’s never satisfied. His game is so smooth. Sometimes I sit down on YouTube and watch his highlights and how he plays because he’s a great player and he’s going to be even better.

SLAM: Speaking of the Seattle guys who have came out like yourself, Nate Robinson, Brandon Roy and guys coming up like Dejounte—what’s it like for people to know that Seattle produces top basketball prospects?

JC: I think that Washington, in general, was a football state. So to see us get attention now for basketball, it’s crazy. Now, like you could look at Seattle and it has just as many per capita to any city in the country in the NBA. I think that says a lot about our city. You know, we’re a tight-knit group and everybody hangs together. If I’m having an event, I know Spencer [Hawes], Brandon and Nate are coming and vice versa. That’s how we support each other. 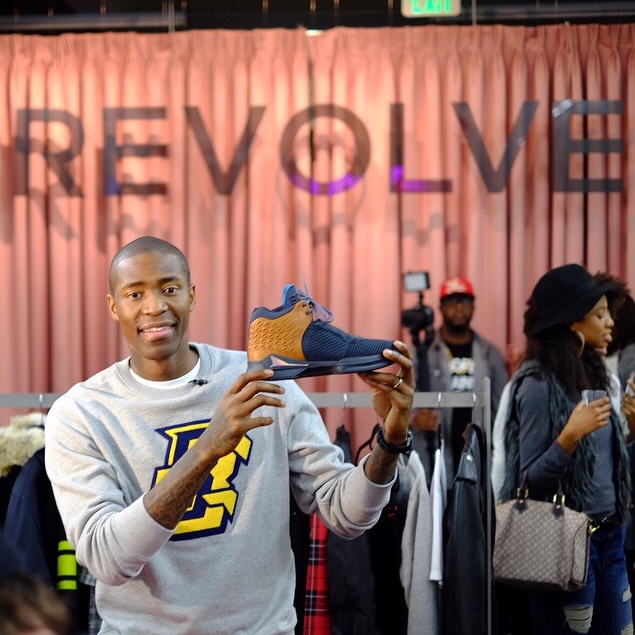 SLAM: Congratulations on the launch of your newest sneaker. Seems like it was just yesterday the news about you inking a deal with Brandblack was announced.

JC: It went so fast, man. It was so exciting to even know that that was possible. A new company and at that time, me being in my 14th season, being a sixth man and for me to have my own shoe, I’ve never heard of that. It was really cool and I think the partnership just continues to grow.

SLAM: How has the last year been with the brand?

JC: It’s been good. We’re both learning each other, so it’s not like it’s a different company and you’ve been with them for 10 years. Every day we’re learning from each other. We always kick around ideas and how we can make something fresher. They run something past me and I run some past them. It’s always like we have the same vision so it’s fun.

SLAM: Now the J. Crossover 2 features a lower cut that’s sleek with woven material. Is that something you wanted when your second sneaker was in the works?

JC: I think that most kids are wearing low tops. We wanted to make them a little bit lower than the ones we did in the past. I still feel comfortable wearing high-top shoes, but I understand the consumer and people want to almost go lower. So I’m down to go a little lower and I think it needs the best of both worlds because it’s low but not too low.

SLAM: What’s it like to work with someone like David Raysse who has designed for players like Kobe Bryant, Tracy McGrady, Grant Hill and Jerry Stackhouse?

JC: That’s unbelievable and humbling to me because I watched every one of those guys you named growing up. I’m such a big fan of basketball. Watching [Jerry] Stackhouse, Grant [Hill], watching Kobe [Bryant] and T-Mac. Actually, I stayed with T-Mac eight years ago when I was working out with him. So it’s very, very humbling and I’m blessed to be in this position.