The big man-turned-scout discusses his transition. 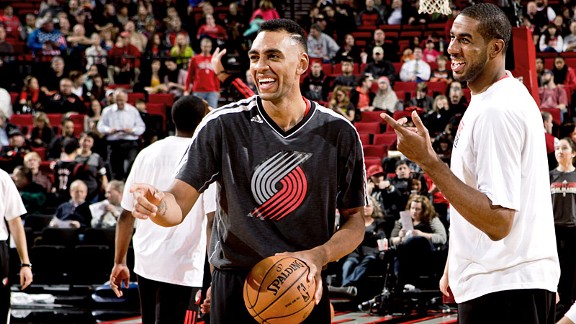 Jared Jeffries was a lottery pick who hung around the League for more than a decade despite a limited offensive game. He made his mark as a willing defender and screen-setter. For 20 minutes a night, nobody fought harder on the glass or in the post. If there was ever tangible evidence that there’s more to the game than launching threes and crossing dudes up, Jeffries was it.

So it’s only natural that Jeffries, now retired, would seek a front-office gig which would allow him to discover some hidden talent. He recently joined the Nuggets’ scouting team, and was in Orlando last week to observe the Summer League. There, SLAM caught up with him to discuss his new career, the insane July news cycle and much more.

SLAM: When you were a player, did you always want to get into scouting later on?

Jared Jeffries: I always wanted to be involved in basketball—wanted to be around basketball, and I think that this gave me that chance, you know. I always knew I’d do something. I didn’t know if it was coaching or front office but I’ve really enjoyed it.

SLAM: Jason Kidd and Derek Fisher have made the leap from player to head coach recently. Did coaching interest you?

JJ: Not really. Coaching in the NBA is very, very difficult. I think it’s harder because of how young the League is now. So I didn’t really wanna do that at all. So once I had this chance to take a front office job—kinda learn the ropes, scout… I’ve been able to do European, college and NBA games this year, so it’s been really good.

SLAM: LeBron and Melo both being free agents this month sent the media into a frenzy. How different is free agency from when you entered the League?

JJ: Everything now is tough because of social media. There’s so much misinformation put out there, there’s so many reports that are false. It’s hard to filter through all the information. But on the flip side, there is a lot of valuable information that can be had. So I think social media has not only changed free agency, but has changed the Draft process, how guys work out, Summer League… You have to embrace the good and the bad.

SLAM: How involved were you in the Draft process for Denver?

JJ: I went over and I saw [first-round pick Jusuf] Nurkic play in the Adriatic League, and I had a chance to see Gary Harris play and be around that. It was a great experience. GM Tim Connelly and Arturas Karnisovas, our assistant GM, they’re awesome. They gave me an opportunity to do different levels of stuff, you know, be involved in all the meetings, and just learn.

SLAM: What brought you to the Nuggets?

JJ: Tim was with the Wizards when I was a rookie there and me and him had a great relationship. We stayed friends over the years, and when he got the GM job, he called me and was like, “If you don’t get an offer from a team that you want, and if you want to join our front office, I’d love to have you.”

SLAM: What have been your impressions down here in Summer League?

JJ: It’s funny, man. These guys play so hard, there’s so many fouls, because you can see the energy and intensity. Because these guys are playing for their livelihood. A lot of these guys are playing for that one chance, that one opportunity to make it into NBA training camp, and once they go from training camp to make an NBA roster. It’s cool to see kids compete and play this hard.

SLAM: Has anybody stood out in particular?

JJ: All of the guys that were in the League last year have a more relaxed pace, more relaxed tempo. You see some of the rookies—they kinda go too fast, they’re pressing a little bit. So you see what a couple years of NBA experience can do for you.

SLAM: You played 11 seasons in the League without ever averaging 10 points per game. What advice would you give a young player trying to make a name for himself down here?

JJ: In Summer League, you have to be able to either bring rebounds, scoring or defensive capabilities. But once you’re on an NBA roster, playing alongside superstars, can you play a supportive role? Can you be a supportive guy to help the team win basketball games? That’s how you stay on the court and that’s how you stay on rosters…Do what got you here. If you’re a shooter, shoot the ball. If you’re a rebounder, rebound the ball. Don’t try to do too much too fast—it makes you look bad.