SLAM caught up with the Chicago Bulls great at the Quai 54 streetball tournament in France. 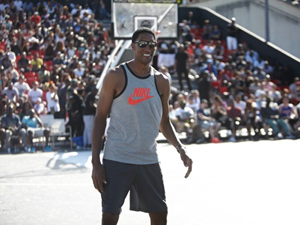 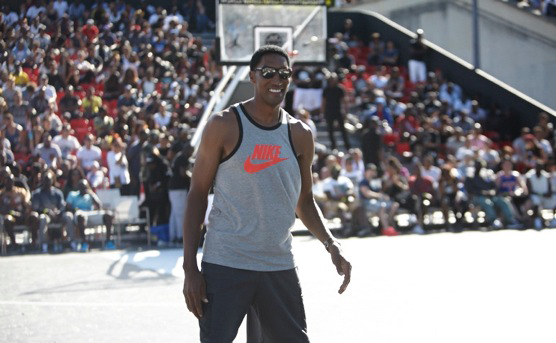 He grew up playing on a dirt court in his backyard, and is now one of the 50 greatest ever to play the game of basketball. That’s not bad for the six-time world champion from Central Arkansas, who averaged just 4.3 points and 3.0 rebounds his freshman year of college.

With a stylish tank top and long shorts to combat the Parisian heat, No. 33 walked out to center court at the recent 2014 Quai 54 World Streetball Championship to answer some questions. More than a few fans foolishly asked Pippen about No. 23. One French journalist made a head-shaking comparison to Tony Parker. But Pippen wasn’t here to talk about Jordan Brand or the Spurs or Nike; he was on vacation, enjoying the competition while meeting the Quai 54 community.

Without even trying to, Pippen symbolized the tournament’s slogan: “Bring your game, not your name.” The press tent was crowded and the black leather couches were hot, but he was as gracious, polite and welcoming as only a selfless legend can be. Just for the record: Pippen was never afraid of Bill Laimbeer. And if he had to pick his own streetball team? He’d go with Tony Parker and Kobe.

SLAM: Did you grow up playing streetball or did you play more in the gyms?

SLAM: Did you have a court in the backyard?

SP: I had a dirt court in my backyard. [And] I played on the playground a lot.

SLAM: Is there a style to the Southern-type of game that’s different at all?

SP: Man, I don’t think it’s an own style really. The style is really built around the individual.

SLAM: What’s the biggest difference between streetball and the Euro League or the NBA?

SLAM: What’s the main hindrance for streetball players who can’t make it?

SLAM: I know when you were a walk-on at Central Arkansas, where you averaged about 4 points and 3 rebounds freshman year, and 26 and 10 by senior year as an All-American. Was there a shift during those years? Were you always serious about basketball as a passion as far as the NBA goes?

SP: I have always been passionate about the game of basketball. I think what really helped me was I grew five inches after my freshman year in college. But I’ve always loved the game. When I grew it just really opened up opportunities for me.

SLAM: Was there a moment when you realized, “Now I might be able to make it to the next level”? Or did you always have that belief?

SP: I think I always had it. You know, I think that the growth spurt just really gave me what I needed, but I’ve always dreamt of playing in the NBA.

SLAM: If you could pick a couple of players for a streetball game…

SP: In today’s game or ever?

SP: In today’s game a good streetball player? Kobe. I would even go as far as saying Tony Parker.

SLAM: You still play, I imagine? Frequently or not so much?

SLAM: Is basketball still the central theme of your life?

SP: I would say it’s a central theme. I’ve got three boys who really love the game.

SLAM: How old are your kids?

SLAM: And they’re all playing?

SLAM: You played with Toni Kukoc and Luc Longley—do you think cultural diversity, as we see with the Spurs, can help a team?

SLAM: I have a quote from Phil Jackson’s Eleven Rings and wanted to have you speak on it for a second. “What moves me is watching young men bond together and tap into the magic that arises when they focus—with their whole heart and soul—on something greater than themselves.” This notion of playing for something greater than yourself — do you think that’s essential to winning a championship?

SP: Oh, for sure. I think that he said it correctly. I mean, winning isn’t about you as an individual. I think you have to sort of push everything to the side and really focus on the team, focus on making other people around you better and not really focusing on yourself.

SLAM: And what’s the key to maintaining that motivation throughout the years? It’s a grueling season, then the Playoffs…

SP: Winning. You know, you find the final ingredient, and you’re winning and it works. It makes it a little bit easier for you when you’re traveling. You’ve got 82 games so it sheds some of the frustration.

SLAM: What’s the biggest thing you’ve learned from being in the spotlight all these years? I imagine you’ve got cameras around you all the time, interviews—what have you learned from that?

SP: Just be yourself. Just don’t try to do anything different, but know that people are always watching you. But be yourself.

SLAM: Last question: Bill Laimbeer. Is he as terrifying to play against as he seems in the videos?

SP: No, he’s not terrifying to play against at all [laughs]. Did you expect me to say, Yes, he’s terrifying?