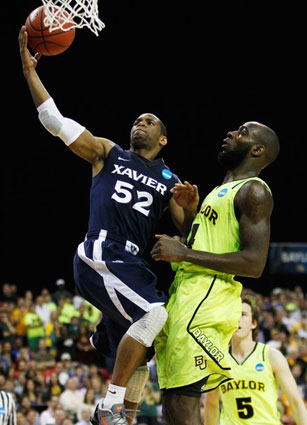 I remember the first time I saw Terrell Holloway play. It was in December 2006, when I was a sophomore at Great Neck South High School in Great Neck, NY. I was on the JV team, but a bunch of my close friends were on varsity, so I would always go and show support. My school was playing in one of those Christmas tournaments, and we made it to the championship game. Needless to say, I was hyped.

In the championship game, we played Hempstead High School, a freakishly athletic squad that featured a handful of future collegiate athletes, none more impressive than Holloway. My Rebels hung tough until the final minutes, but Holloway’s 31 points, 10 assists and 8 rebounds were just too much for us to overcome.

Holloway remembers that game because it was his first ever varsity game. I remember that game because I knew I had just witnessed something special, something I would never forget. I knew that Terrell Holloway, then committed to Indiana University, was going places. I remember thinking to myself, Is this how good you have to be to play in the NBA? Wait, what? Did I just see a future NBA player?

Um, yeah Eldon, you did.

Now known as “Tu” or “Tu Tu,” Holloway went on to have a stellar career at Xavier University, racking up

plenty of accolades along the way, including winning A-10 Player of the Year as a junior and being the only DI player to record two triple-doubles in one season. As far as my “personal” connection with Terrell (I refuse to call him Tu, maybe because I think calling him Terrell somehow validates or proves that I knew him before he was big-time, something for which I hold a lot of pride. I don’t know, but yeah, maybe I’m a weirdo.), it didn’t—and probably will never—dissipate.

After witnessing him cut up my high school team, I never bet against him. I picked Xavier to go to the Final Four in our SLAM NCAA Tournament predictions, and when I was in Las Vegas during March Madness this season, I placed a bet on the Musketeers to defeat Notre Dame in the first round of the Tourney because, well, I knew how good Holloway really was, and I knew the bookmakers did not. Call me delusional or insane, but I just knew Holloway wasn’t going down in the first round of the NCAA Tourney. Not as a senior. Not after what he showed me in ‘06.

That was the first time I saw Terrell Holloway. Last night, on the eve of the 2012 NBA Draft, was the second.

Yesterday afternoon, Nike basketball celebrated the grand opening of Rivington Court, the home of Nike streetball for the summer of 2012. The schedule featured a Bronx vs Queens “Battle of the Boroughs” scrimmage, showcasing the best high school talent from each borough, followed by a Nike+ Dunk Contest, and finally an intense under-the-lights game between reigning champions Team NIKE I and the newly assembled Team NIKE II, with the champs holding serve, 87-77.

Both teams were packed with star-studded talent, but two guys in particular (both on Team NIKE II), caught my eye: Erving Walker and Terrell Holloway. Both guys, on the eve of arguably the biggest day of their lives, were out in the middle of New York City competing in a relatively unimportant streetball game. It was a fascinating scene.

After the game, I briefly caught up with Holloway. We touched on numerous topics, including his pre-draft preparation, his mindset heading into the NBA Draft, and why he decided to play in a streetball game less than 24 hours before either David Stern or Adam Silver will (hopefully) call his name.

SLAM: Why did you come out and play in a streetball game the night before arguably the biggest night of your life, the NBA Draft?

Terrell Holloway: You know, I love to play basketball, man, and I just couldn’t pass this up right now. This is great; Wooden, parquet floor outside? I’ve never seen this before. Even with the Draft tomorrow, I had to be out here for this. It helped me get my mind off the Draft for sure, which is something I wanted because it’s easy to stress or worry right now, but everything is out of my control so there’s point. I’m back in Hempstead, and there’s nothing to do over there, so there was no reason for me to miss this.

SLAM: How did this come about? Was this planned or did you just decide to play this morning?

TH: It all happened today. I got home from Minnesota last night, and my coach gave me a call and asked if I wanted to come play. Guys were surprised that I came out, especially because the coach didn’t tell anyone that I was playing. But I came to play with Yatta (Sundiata Gaines) and Erving Walker. Those are my guys, so it was real fun.We lost unfortunately, and I always want to be a winner, but my mind is on the Draft right now, so it was good to get my mind off it.

SLAM:What are you hearing in terms of your Draft positioning?

TH: I don’t’ wanna sell myself short; I feel like I should be a first round pick. But regardless if I get picked or I don’t get picked, I feel like I’ll be on an NBA team soon.

SLAM: If you get drafted, what are your plans for the rest of the summer?

TH: I plan on being in New York until early July, when training camp for the rookies begins, and then get ready to workout wherever I go.

SLAM: What have you been up to since your season ended?

TH: I was in Indianapolis working out with Maalik Wayns, then I went to Las Vegas to workout with Joe Abunassar at the Impact Basketball Academy. I’ve been traveling non-stop, and kind of losing track of where I’ve been [laughs].

SLAM: What teams have you worked out for?

TH: I’ve worked out for 14 teams; I can’t really think of them off the top of my head.

SLAM: What was the hardest, or most intense workout you had?

TH: They were all tough and real intense.

SLAM: Where was your best workout?

TH: I think my best workout was with the Memphis Grizzlies.

SLAM: What are you trying to get across to NBA teams, in workouts and interviews?

TH: I want them to know I’m a true point guard. At school, people saw me as more of a scorer, but that was because I had to. My team needed me to score points. I want teams to evaluate me off of being unselfish, and to see that I’ll help the team in whatever aspect they need me to.

SLAM: What would you say is your biggest strength right now?

TH: Just that I’m a complete basketball player. I’ve had triple-doubles before and I pride myself on just doing what the game calls for.

SLAM: What is the one aspect of your game that you need to improve the most?

TH: My turnovers. Sometimes I get too happy with the ball, and start playing too loosely. I need to protect the ball better.

SLAM: What would it mean to you if you were selected by a New York team?

TH: I would love to be on othe Knicks or Nets. I fit the criteria; I’m an New York City guy, I’m tough-minded and I’m aggressive with the ball. Hopefully, through the graces of G-D, one of them will call my name.