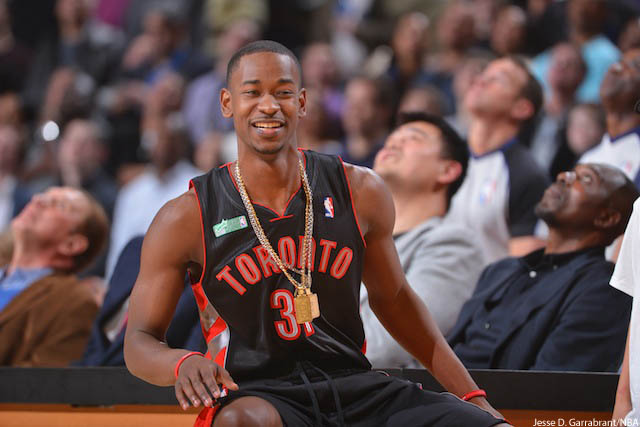 by Abe Schwadron and Adam Figman

When we arrived at NBA All-Star Jam Session on Friday morning around 8 a.m., we were tired. Then, we learned that Raptors guard and defending Sprite Slam Dunk champion Terrence Ross had been there since 6 a.m.—more than an hour before he was scheduled to begin his gauntlet of morning interviews. Evidently, Ross is taking his dunk title defense seriously.

Before T-Dot Flight 31 takes off on Saturday night, we sat down with him to discuss what we can expect to see in this year’s contest, his biggest in-game dunks, his relationship with Drake, his sneakers and more.

SLAM: Got any specific ideas for the Dunk Contest yet?

Terrence Ross: Yeah, I’ve got a couple dunks. One dunk, something came together earlier yesterday, so I’ll probably be doing something new tomorrow. I practiced some dunks—I was with Team Flight Brothers, and they were helping me out with some things. I should have a couple dunks.

SLAM: Any teammates that we should expect to make an appearance?

SLAM: Is there less pressure this year, considering you won it last year?

TR: If I don’t win, I don’t win. It’s a big deal but at the same time, if I don’t win, the only way I can get myself over it is if I’m like, it’s not that big a deal. It’s gonna be fun regardless, but we’ll see how the night goes.

SLAM: You’ve had some big dunks in games this year. Which one sticks out the most to you?

TR: Kenneth Faried. That’s the one that sticks out more than anything.

SLAM: That was crazy.

TR: [Laughs] Yeah. I saw him walking in the lobby yesterday, and he didn’t even say hi. Just kept walking. [Laughs] I saw him from like down the hall, but I was like, Nah, I’m not even gonna walk that way.

SLAM: After you dunk on guys, do you know that the relationship with them is definitely gonna be weird?

TR: Umm, you know, you hope for the better. But whatever happens, happens.

SLAM: What do you think of the Dunk Contest’s new format?

TR: A lot of people are gonna be like, Oh, I don’t like the format. It doesn’t make sense. But I can guarantee you by tomorrow, everybody’s gonna like this format. Just because it’s like nothing anybody’s ever seen before. Everybody’s like, it should be like the old school, where everybody’s going against each other. You’re gonna have a little bit of that, but at the same time, I think they did a great job—the fans are gonna like it.

SLAM: If you could pick any two players from NBA history to be your teammates in the Dunk Contest, who would they be?

TR: I would pick Dominique Wilkins and, ahh, man, that’s hard. I wanna say Jordan, but I kinda want like a big man that can go in there and throw some windmills and throw it down hard. So I would say, actually, Dominique Wilkins and Jason Richardson. Just ‘cause I know Jason’s done unbelievable things that nobody can do today. I watched a lot of him, but when I’m done watching, it’s like, I can’t even do half of the things that he just did, so there’s no point in watching him. He was incredible.

SLAM: What other dunkers in the NBA were you a fan of growing up?

TR: For me, I started watching a little later. Guys like Josh Smith, he was a big influence on me. Because even today, there’s not too many guys that jump off one foot. Most guys try to go off two, or go close to the basket. He had two-foot jumps but at the same time, he could do a one-foot windmill, one-foot jump over somebody. I think that’s kind of how I jump. That’s the one guy I looked at the most.

SLAM: Who around the NBA today do you see as your competition for best dunker in the game?

SLAM: Who’s the worst dunker on the Raptors?

SLAM: You scored a career-high 51 points against the Clippers recently. Is that the most points you’ve ever scored in one game in your whole life?

TR: Yeah, most I’ve scored in my life, 51. Like in a real game where they kept stats and everything, yeah. Not to have it happen in high school or college, but have it happen in the League, that’s something special.

SLAM: What was a more important moment for you—winning last year’s dunk contest or that 51-point game?

TR: I’d say the game, for sure, because it was a real game. The dunk contest is just a dunk contest, something you do for fun. But during the season, in the midst of things, I would say the game for sure.

SLAM: What did you do with the game ball?

TR: I gave it to my mom. I met her in New York the next day. My mom, she always wants anything I have in terms of accolades, jerseys, posters, whatever. I thought it was something she would like.

SLAM: Did you feel like that was important for you to prove to people that you’re not just a dunker?

TR: For sure. Everybody thought of me just as a dunker that’s good in the open court, but it helped me a lot to show people I can do a lot more.

TR: Against the Clippers, playing against Jamal [Crawford], he was getting four-point plays and shooting threes and all kinds of crazy stuff, so it felt almost like a Pro-Am or Summer League type of game. Like a pickup game. You don’t really realize what you’re doing until it’s all over. It felt like one of those summer league games.

SLAM: Did you do anything different in preparing for that game?

TR: No. Nothing. Same thing I do every game. As soon as I shot my first couple of threes, I felt like I had just caught fire. It felt like a playoff atmosphere.

SLAM: Did you know early on you were going to have a huge game?

TR: No, because there’s been times that I’ve hit three threes in the first quarter, and the defense will switch it up and I’ll end up with 20 maybe or 15, something like that. I knew something was going on when the first half was over and I had like 20-something or 15 at the end of the first quarter. I was like, if I stop right here, that’s cool. At the beginning of the third quarter, I didn’t make any shots. My first points came off some dunks. Then after that I hit a three, I hit another three, and I just kept shooting. It felt good.

SLAM: What were guys saying to you towards the end of the game?

TR: Once somebody told me I had 40, I was like, What? DeMar just got his career-high a couple days ago, when he had just got 40. Towards the end, there was like 20 seconds left and one of my teammates came up to me like, Man you got 48 right now, you might as well try and go get these last two points and get fifty. Luckily I got fouled two times and ended up with 51.

SLAM: The Raptors are having a great year in the East, exceeding most people’s expectations for this year. But there are also trade rumors. What are you hoping happens down the stretch?

TR: I hope we don’t make any trades. I hope we stay together. We got here basically with this core group. We’re still winning, nothing’s going bad. I feel like everybody is doing the right things. So I hope that we all stay together, this team, and see how far we can take it in the playoffs.

SLAM: Drake name-dropped you in a big Rolling Stone story that came out yesterday. Did you see that?

TR: Yeah, that was big time. I felt official after that. It was cool. I mean, I know him now, so it’s nice, but when you throw a name out there to somebody like Rolling Stone, it’s definitely a good shoutout.

SLAM: Is it cool having him as a part of the organization?

TR: Yeah, for sure. He brings a lot of excitement to the city. He gets everybody excited about the Raptors, and every time he comes to the arena, it’s like the crowd just steps it up. They get loud and see him cheering, and they start to cheer. He just brings life to the arena.

SLAM: You have to get him on the court at some point.

TR: Oh, for sure. He’s with Amir [Johnson] sometimes at the practice court late at night, shooting around. He’s out there now and then.

SLAM: Did you get a pair of his Jordan kicks?

TR: He’s getting sizes from everybody. He’s sending a couple pairs our way.

SLAM: Your whole team is pretty deep in the sneaker game.

TR: Yeah. I’ve been trying to catch up a little late, but DeMar [DeRozan] be holding it down, Amir has some things from time to time. But I’m trying to step my game up.

SLAM: Is it a competition within the Raptors?

TR: Nah, man. DeMar has every shoe known, from Jordans to Nikes. He just don’t wear them, though. He sticks with his Kobes and does his thing. But I’ve been trying to step my shoe game up.

SLAM: What about off the court?

TR: I like the Vs—the Vs are probably my favorite shoe. The Vs, the XIs, the VIs and some of the IXs.

SLAM: We spoke to your former college teammate Tony Wroten earlier this year, and he said that he’s the best in the League, sneaker-wise.

TR: No, no, no. Nah, I’m not gonna dispute it, because Tony’s got some heat. I’ve seen it. Even in college, he would come to the game and we would try to outdo each other when it came to shoes. But nah, Tony has some heat. I would say he’s No. 1 if I had to pick.

SLAM: People probably didn’t notice, but back in college you guys were clearly big into kicks.

TR: Oh, for sure. Ever since [I played with] Isaiah [Thomas] and Quincy [Acy], we always try to have some heat. Isaiah was kind of the first person to really do it, then I started to really do it my second year, and Tony was just always on it since high school.

SLAM: Have you noticed people are starting to ask you about your sneakers more, ever since you started getting more playing time?

TR: Yeah. Every game I try to pull something out.