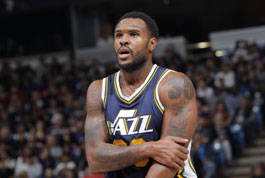 Folks are already touting it the “shot of the year.” After all, Trevor Booker’s no-look circus shot last month with 0.2 left on the shot clock did become an internet sensation. The backward, tap-shot led to other NBA players also wanting to duplicate the move, such as the Phoenix Suns during practice, and even became an online contest for fans. While the South Carolina native is probably now best known for making the almost impossible shot, he has nonetheless enjoyed a 5-year NBA career so far after four-years at Clemson led him to the 23rd pick of the 2010 NBA Draft. He spent his first four years with the Washington Wizards, where he was part of the rebuilding blocks that saw a franchise that was last in its division become one of the top teams in the Eastern Conference. Last summer, he signed a two-year deal with the Utah Jazz, where he’s currently averaging 7 points and 4.5 rebounds.

We recently spoke with the 6-8 forward about ‘the shot,’ playing for the Jazz and his transformation in the League over the past few years, among other topics.

SLAM: We have to start off by talking about that shot. Had you ever attempted it before?

Trevor Booker: I’ve attempted it before just playing around — not many times. But I’ve never done it in a game situation or even practice, for that matter. I was kind of stunned when it went in.

SLAM: So how many times would you say you have made that shot just messing around?

TB: Not sure. Definitely not many. I can probably count on one hand.

SLAM: What was the actual play that was drawn up?

TB: Well when I checked in, I didn’t know the play. I tried to get the ball but the referee handed the ball to Gordon [Hayward] so quick, so I just went for the lob first but it wasn’t there. Then he gave me a bounce pass and that was about the only thing that I could do with it.

SLAM: What’s the adjustment been like of going from a team like the Wizards who became a contender in the East to a rebuilding mode team out West with the Jazz?

TB: You know, it’s a different adjustment — going from a playoff team to coming to a team that are in the rebuilding stages. But I definitely couldn’t be happier. They’re a great group of guys. They’re talented and smart players. If we continue improving, I think we’ll definitely be a good team in a couple of years. I know that teams recognize that we are a team that can’t be taken lightly. In a couple years we’re looking to be one of the top teams in the NBA.

SLAM: Having started your career with the Wizards in 2010 with John Wall, you’re familiar with the process of going from rebuilding to a playoff contender. What did you learn from that process that you can bring to this team?

TB: When I first came in [to the Wizards], I think we were a little worse than this team. So I think I can definitely bring some of that knowledge of adversity from what we went through in those first years. My experience can probably help us through it.

SLAM: How do you feel you have been able to mesh into the rotation with some of the bigs the Jazz already have there?

TB: Well, my minutes have been pretty consistent, so I’m happy about that. In Washington, it was a little different. Some days I would play, and then other days I wouldn’t play. So I’m just happy that my minutes are consistent. We have a great group of young bigs on the team so I’m trying to help them out, and at the same time I’m trying to go out there and make an impact on games.

SLAM: So basically halfway through the season, how would you grade the team’s year so far?

TB: If I had to give ourselves a grade, i’d probably say it’s a B+. I know a lot of people didn’t expects us to have many wins coming in. But we know what we can do and we’re not going to base our season on how many wins we have. We know internally what we want to do to get where we want to get to. We can internally determine our success.

SLAM: You’ve beaten some pretty good teams so far, including Chicago, Memphis, San Antonio, Miami and Cleveland. So you’ve shown that you can beat anyone as much as you can lose to anyone.

TB: We’ve shown that we can compete with the best teams. It’s just about being consistent. Being in a situation where we’re growing and keep improving. Some nights we might lose to a team we should win against and some nights we might beat a team and surprise everybody.  It shows our potential as a team and that when we play the right way we can beat anybody.

SLAM: Considering how short the average NBA player’s career is, and you’re already on your fifth year in the League, what do you attribute the ability to maintain so far?

TB: For the most part, the energy I bring on the court has kept me in the League. This year, I’m stepping out and extending my range to the three-point line. I’m sure that will help me stay in the League even longer. It’s such a privilege to play in the NBA. And hopefully I can get 10-plus years out of the NBA.

SLAM: How would you describe the growth you’ve seen over the first five years of your NBA career?

TB: When I first came into the League, I didn’t shoot the ball at all. I was strictly in the paint area. As my career has moved on, I’ve extended my range each year. And this year, the three-point shot was something that I added in. I felt I had my midrange game down so I wanted to just step out a little more.

SLAM: How has life in Salt Lake City been treating you so far?

TB: It’s definitely a different culture than Washington DC but I love it out here. Everybody’s friendly. It’s beautiful with the mountains here. It’s just nice weather. During the spring and summertime, I came down here and it was pretty nice. I’m just happy to be here. Like I said, it’s definitely different from DC but at the same time it’s a great place.

SLAM: Any favorite spot around the city?

TB: I haven’t really hung out too much. But I usually just hit the Cheesecake Factory after the games. That’s about the only thing that’s really open.

SLAM: You mentioned earlier that in a couple of years you guys might reach that next level. What do you feel the team needs to do in the next two years to get there?

TB: We just have to continue to grow as a team and build that team chemistry. Keep guys and the pieces together. I think that’s the biggest thing — by keeping guys together you keep that chemistry going. At the rate that we’re going right now, we’ll be fine.