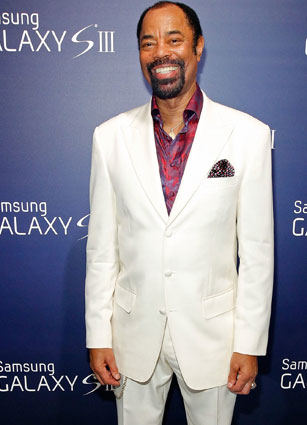 Technology has never really been my thing. Up until a few months ago, I was still getting my email through AOL, and I think I’m one of the 47 people in the world who still uses a Blackberry. I’ve just never really been one of those people who always has the newest gadgets.

So, suffice it to say, I was pretty excited when I got an email inviting me to attend the New York launch of the new Samsung Galaxy S III phone. The fact that the email said that Walt ‘Clyde’ Frazier and Steve Nash would be in attendance—the GSIII specializes in sharing, so Samsung thought it would be cool to have two of the best “sharers” in NBA history at the launch—was pretty exciting, too.

After a couple of wrong turns down

in Tribeca, I finally arrived at the studio where the launch was being held. (Side note: someone is going to have to explain to me why everyone loves Tribeca, because I can’t stand that area. There’s no rhyme or reason to the directions of the streets. New York City is supposed to be a grid; all the streets in Tribeca wrap around in circles. At one point, I almost walked into the Holland Tunnel.)

Before Samsung gave its presentation, I also had the pleasure of sitting among the tech media, which, if you’re someone as technology-incompetent as me, can be pretty demeaning. It’s probably how Mike Miller feels when he watches some of his teammates in practice. While they were all analyzing and commenting on each others phones, I was trying to reload Twitter and get my BBM to work.

After the presentation, I made my way over to Steve Nash. The first thing I asked him was if he had any new thoughts on his free agency.

Apparently, I missed out the annual event of getting a free agent to say that he’d “consider” signing with the Knicks. Oh Well. Nash also added that he was “really excited to be involved with Samsung,” and that he thought that the Galaxy SIII was “amazing.”

After that, it was time to talk to Clyde, who was in top-Clyde form. A perfectly tailored white suit with an open colored maroon shirt and a matching pocket square; red shoes; perfect posture. You could see his Championship rings glistening from across the dimly lit room. When I told him I was from SLAM, his face lit up.

Before we got to basketball, I had to ask Clyde a few question about his connection with Samsung. After all, I never really pictured Clyde as a technology guy.

“They got to me right in the nick of time,” he said. “I still have a flip phone.” Then he pointed to the phone’s sleek white exterior and said, “And being Clyde, you know my phone has to have style, and look at this (phone). It looks like Clyde, doesn’t it?”

As far as compliments go, I’m not sure they get much better than that. As for the phone itself, (you can learn more about it here) like I said, I’m no expert, but it looks pretty awesome. It’s got all these great sharing features, you can open videos and pictures while texting and it’s pretty easy to use. But don’t take my word for it. Listen to this guy.

Here’s the rest of our conversation with the great Walt ‘Clyde’ Frazier.

SLAM: Have you been watching the Finals?

Walt Frazier: Yeah, at my restaurant (Clyde Frazier’s Wine and Dine) we’ve got a few big, state of the art TV’s. We had a big crowd there on Tuesday night with a lot of Miami fans, which actually surprised me.

SLAM: What do you think about what we’re seeing from LeBron in these Playoffs?

WF: Hey man, he’s silencing all his critics, and he’s getting better. I like that he’s added a post game, which he didn’t use to have in his repertoire. He’s been unbelievable.

SLAM: It looked like James Harden lost his confidence during Game 4. Is that something that ever happened to you?

WF: Of course. It happened to me when I was in the Playoffs my first couple of years. There’s no substitute for experience, which is why I picked the Spurs to beat the Thunder in the Western Conference Finals. The way the Thunder are playing now, that’s how I thought they would play against the Spurs—Westbrook being erratic, Harden not stepping up…But I actually thought they would beat Miami, but it looks like they’ve been overwhelmed by the pressure.

SLAM: Given your personality, I’m surprised to hear you say that you used to have issues with your confidence. Was that the most difficult thing you ever had to overcome?

WF: Yeah, it was. When I came into the League, I wasn’t confident. I was confident in my defense, but not in my offense, and that showed early on and was why I was considered a defensive specialist. Eventually, though, I had to gain confidence in my shooting, and I did. No matter what you try to do, confidence is the key to life. If you don’t believe, you can’t achieve.

SLAM: So how did you fix your confidence problem?

WF: Red Holzman gave me a talk one day in my rookie year. A very simple talk, but it hit home. He said, “Clyde, what’s wrong with you? I saw you play in college, and I know your’re better than this. I believe in you, and I’m going to put you out there.” For me, knowing that the coach and my teammates believed in me, that was all I needed.

SLAM: You mentioned your restaurant before…how often does Clyde Frazier go out and get his meal or drink paid for by someone else?

WF: [Laughs] Every day, man, Every day somebody is giving something. If I go to Starbucks, I don’t have to pay. The other day I was just getting a water and the guy there didn’t charge me—that happens every day. There was a long time period if the ’70’s were I learned that my money was no good in New York. Wherever I went, I didn’t have to pay. People were always buying me dinner and sending me champagne, and that still happens today. It’s really very humbling to see. Even like now, seeing the different people that come out to my restaurant, that’s very humbling. To be my age, and to have a restaurant, and be out here for Samsung, and see all the hoopla around me, I don’t take it for granted.

SLAM: Because you know that, very often, your money isn’t good in New York, did you, or do you ever leave your house without a wallet?

WF: [Laughs] Yeah. And even when someone stops me for a ticket, I don’t even need my license. They go “Oh, hey Clyde.” There’s something about being at the pinnacle in New York; the people here really appreciate what I did so long ago. And now, you have a whole generation of kids that know me as the Knicks’ announcer, and they’re dragging their parents to to my restaurant to see me. It’s terrific.

SLAM: Is it weird for you to be known to one generation as one of the stars from those Championship teams, and to another as the Knicks’ announcer?

WF: No, I’m used to it by now. But now, because of technology, you have younger kids who will come up to me and say, “Clyde, I’ve seen videos of you playing, you’re the greatest Knick ever.” That’s the beauty of technology—it’s helps perpetuate the legacy of me and my team. Like, when I Google myself, I can’t believe how much information there is on me.

I also like that, now that I have this phone and I’m getting better with technology, I can now compete with @NotWaltFrazier. (Clyde joined Twitter a few months ago.—Ed.)

SLAM: Speaking of @NotWaltFrazier, what was the first “Clydeism” that you used?

WF: Dishing and Swishing. I had been away from the game for a long time, and I was saying “passing” and everyone else was saying “dishing.” So I added the “swishing to it,” and “posting and toasting,” “wheeling and dealing,” “shaking and baking,” and “swiss cheese D.” What happened is, I started on radio where you don’t get a chance to talk that much, so I had to be in-and-out. So I came up with these sayings so that I could be descriptive in a short amount of time.