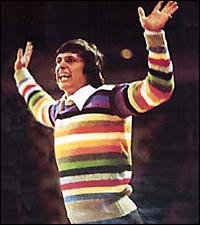 1) The Business Casual Look: I’m a big fan of Greg Popovich (open collar) and Don Nelson’s (golf shirt) fashion sense on the sidelines. I wish more coaches would dress like them. In the NFL, coaches are fighting to wear suits on the sidelines (and some guys—namely Parcells—should be definitely be forced to cover their guts and man boobs with as much clothing as possible), while the NBA lets coaches dress like they’re about to hit the club. I love this game!

(Of course, I won’t be totally pleased until I see Larry Brown’s infamous sweater from the 70s make a glorious comeback. That and bell bottoms!)

2) The Nuggs: Once Carmelo makes his return (Monday), will this officially become the most tatted team in the Association? Probably. They might have even had the crown with Melo in street clothes. I can’t wait until all three of these guys are running together, it is going to be veeeeery interesting. I expect things to hit a rough patch initially, but this team has the potential to do some real damage. And make sure to mark on your calendars that Phoenix and Denver square off on March 17th. It will be epic.

3) Did Race Play a Role in The Pacers-Warriors Trade?: As soon as the trade was announced, I immediately thought to myself, “G-State is the clear-cut winner in this deal, and that Indy team just got a whole lot whiter.” The whole trade doesn’t really do much for me; the Pacers and Warriors (OK, so G-State might sneak into the first round of the playoffs) aren’t going anywhere fast; and I’d be shocked if most of the players involved in the transaction stuck around with their new teams for much longer.

It wasn’t until I stumbled upon this Free Darko post (which led me to some message board conversation on the Indy Star’s website) that I began to seriously ponder the racial/cultural implications of the trade (especially in Indiana’s case.)

“hahah, i don’t care if this is the worst trade in league history, we finally got rid of that criminal, trigger happy, primadonna Stephen Jackson. He’ll fit right in out there in Cali. I hear there’s plenty of nudee clubs out west.”

(Keep in mind that I don’t think the fools on the message board represent the overall mentality of people from Hoosier country, but it’s interesting to read their thoughts nonetheless. Peep some of the other comments and judge for yourselves.)

4) Stephen A.: I only watched three episodes of his show (Iverson, Artest, and Bryant were the guests respectively) before it was canceled, and it struck me as an infinitely boring and unoriginal program. Smith—and I give the guy credit for being a good interviewer with the NBA guys—is a man with far too much ego to make this kind of show work.

A TV talk show host should have the ability to laugh at himself from time to time and not take himself too seriously. I don’t think Stephen A. has ever taken anything lightly. Dude even eats his cheese doodles with a purpose!

(Of course, if you are to believe the ESPN press release, this only means more Stephen A. on television and in print. Hooray! Not.)

5) “24”: I can’t believe I waited until this season to start watching the show. Last Sunday, after concluding that Tom Brady has an unbreakable deal with the Devil, I decided to give the much-hyped show a chance, and it was probably the best decision I’ll make this whole year. An amazing program. Can’t believe I didn’t jump on the bandwagon sooner; simply inexcusable. Now, I’m sitting around and plowing through seasons 1-4 on DVD like a crack fiend. *Hanging head in shame.*

(Also, is it just me or are the terrorists dressed a little too well? Should CIA agents be doing stakeouts in Dolce&Gabbana shops?)

6) K-Fed beats Britney: Slow your roll. He didn’t really “beat” her, but he’s going to be a part of the Superbowl madness and she won’t. I don’t get it. He’s a lowlife (and so is she), but at least people still want to see her (well, I’m not so sure about Omar.) I gotta say, after their relationship came to an end, I didn’t think Federline would ever get the upper hand on Spears in anything again. Here’s what one exec had to say in regards to Britney’s potential appearance in a Superbowl ad:

“She’s too much of a train wreck,” said the insider. “Besides, we already have Paris Hilton.”

7) The Ref vs. The NBA: This was a somewhat underreported story. About a week ago, the League suspended 9th year referee Rodney Mott (49 years old) for three games. His crime? Allegedly, dude flipped off some fan in Portland and used “inappropriate” language when addressing him (read= he cussed his ass out.) To the surprise of some, Mott has decided to challenge the ruling.

“The league is singling out Rodney because they want to send a message that they can and do punish referees,” stated Lamell McMorris, official spokesman for the National Basketball Referees Association. “Rodney did not do what they said he did, and the league is using him as a scapegoat and poster child to distract the public from other battles.”

This has the potential to get juicy. On second thought, no it doesn’t.

8) LeBron: Is the guy even playing this year? He’s putting up the usual gaudy numbers, his team is winning enough games to trick people into thinking they’re contenders (the evisceration they suffered at the hands of Phoenix a few days ago should render whatever they accomplish from now until April completely meaningless), but it’s as if James has yet to show up this year.

I hardly see him in the ‘plays of the week’ segments; Gilbert seems to be hogging all of the media attention; Kobe, Dirk and Nash have become the runaway favorites for MVP; and the biggest star in the League (not to mention its future) is almost an afterthought as the season kicks into overdrive. It’s eerie. Is he pulling the Wait-Until-The-Playoffs-To-Bring-The-Funk trick that Shaq has perfected over the years already? Good God, I hope not. I couldn’t handle that from him for the next 15 seasons.