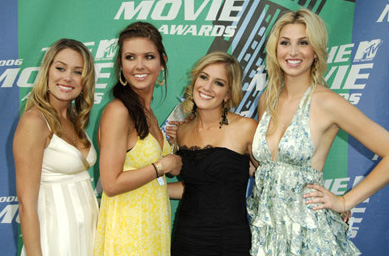 OK, so things have finally slowed down a touch around here today. Late last night I finished the second feature I had to write for this issue of SLAM, so no more multi-thousand-word missives for me. At least not for a day or so.

Anyway, I wanted to get some random thoughts posted here today in between work around the office…

1) Snow
Growing up in the Dirty we used to get snow maybe once a year. It would snow about one inch, and they’d shut down the schools for a week and all the grocery stores would sell out of bread and milk. Obviously, people down south weren’t handling it all that well. Here in NYC, it snows all the time and everyone just pretends it hasn’t snowed at all. Like today, when I woke to find everything coated. Big deal. Go to work.

2) The Adam Morrison Contest
I had to shut down the comments because you guys were killing it. And also because we hit our time limit. The coments are now being analyzed by people who are great at analyzing contests in order to select a winner. I’ll post that later, and when I do we’ll launch part two of the giveaway. Overall, great work, peoples.

3) “The Hills”
I went to the Sonics/Knicks game last night to catch up with a few Linkstigators on the Sonics, and one of the Seattle

players — and I don’t want to throw him under the bus so I won’t say who told me this, although his name is Nick Collison — admitted that he loves “The Hills.” And so do I.

The first season sucked, because it focused on Lauren Conrad and her lump of a boyfriend, Jason. But LC finally dumped Jason (who isn’t taking it well, apparently), and this season has been tremendous. LC and her BFF/roomate Heidi have been pried apart by Heidi’s boyfriend Spencer, and there were about three episodes in a row where it was pretty much all-out war. During this stretch, LC did her best to tell Heidi to step it up, that she was better than Spencer. But Heidi chose Spencer, leading us into three weeks of pure hell. Spencer has become a wedge between the girls, as now they do nothing but fight, and this is possibly the most exciting viewing on TV right now. For instance, last week another friend got involved by making out with one of Lauren’s ex-boyfriends, leading to this exchange:
Lauren: Tell me the truth, did she make out with him?
Heidi: Yes.
Lauren: Bitch!

This week’s episode was calmer, as the producers had to move the story along, but scenes from next week’s show again looked terrific.

After we stood there in the Sonics locker room discussing “The Hills” for a while, the unnamed player (Nick Collison) laughed and said, “Isn’t it kind of weird that we’re standing around here talking about the lives of these teenagers?”

I thought about that for a second and responded, “No.”

4) “Stars On Stars”
Sam admitted this morning that he actually enjoys watching the Knicks play — by the way, what’s more embarrassing, liking the Knicks or The Hills? — and he bemoaned Steph missing the game-tying free throw. And sure, that was a downer.

But what about the debut this Friday of “Stars on Stars,” Stephon Marbury’s new talk show? It will feature Starbury conducting one-on-one interviews with stars including Vijay Singh, Spike Lee, Kobe Bryant, Michael Rappaport and Kareem Abdul-Jabbar.

Personally, I can’t wait. Just gotta make sure I know how to turn on the subtitles.

5) Content Catcher
For as long as I’ve worked at SLAM, getting massive amounts of spam mail has been an integral part of my life. It was not uncommon for me to arrive at the office in the morning and log in to my work email and find over 200 emails waiting for me; of those, roughly 198 would be junk mail. If I wasn’t so cynical, by now I should be celebrating, because according to those emails I’ve won lotteries in Europe and been the beneficiary of unknown relatives in Africa dying and leaving me millions of dollars, hundreds of times over.

Anyway, dealing with the spam became a regular and permanent part of my life, like the Hawks sucking and the Braves losing in the postseason. There’s no telling how many legitimate emails I accidentally deleted over the last seven years, but I had to chalk that up to the cost of doing business as SLAM.

Then last weekend we all received an email from the tech support staff here at work telling us that they’ve installed a new system called Content Catcher on our email system. Basically, it’s a filter, so any email that comes to me from an address that I haven’t preapproved goes to a holding website. I’m supposed to go to that website a few times each day and sift through what’s there and see whether or not there’s any legit mail waiting.

Well, this isn’t a great idea, because I’m pretty sure I now spend more time sifting through the mail on the other site than I did deleting junk mail. And if I’m not vigilant about it, real mail that I’m actually waiting to arrive will sit there idling for hours. Doesn’t this defeat the purpose of a spam filter? At least we know it’s really catching content.

6) So my work phone just rang and the following conversation happened:
“This is Lang.”
“Er…um…Whitaker?”
“Yeah.”
“It’s Gilbert.”

Gotta love Agent Zero. Can’t tell you why he called, but you’ll read about it soon enough. And I can’t shake the feeling that I was Dan Steinberg, I probably could have made that previous paragraph into a 500-word blog entry.

7) On the Ron Ron front, the 911 tapes have been released and are online here. The woman, presumably Ron’s wife, seems oddly calm throughout. I think the most interesting part of all of this is the admission that 911 has been called from the Artest house five times since November. Did the Kings know about this? Why wasn’t something done sooner?

8) Love the new ESPN.com corrections page. Got it bookmarked and everything. My favorite entry:

“In a March 5 story on ESPN Radio’s Mike and Mike in the Morning, it was reported that the Detroit Lions did not have a representative at Sunday’s Brady Quinn workout. According to the Lions’ public relations staff, the team had four coaches, two scouts and one front office executive at the workout.”