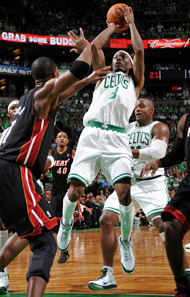 On the court, it looks as if nothing rattles Marquis Daniels. The do it all swingman defends, posts up, and scores without calling much attention to himself. Don’t be fooled by the quiet demeanor, because Daniels’ actions off the court are certainly worthy of recognition.

The day began at the Benjamin Banneker Charter School where hundreds of elementary school students packed into the auditorium for a surprise visit from the Celtic swingman. Daniels took to the stage and talked to the enthusiastic crowd about the merits of hard work and following your dreams.

Daniels started the Q6 foundation in 2007 as a way to give back to those in need. “My daughter has a trait of sickle cell anemia,” Daniels said. “That’s what made me want to do something.”

In addition to promoting awareness of the disease, the foundation focuses on helping children in Orlando and other cities Daniels’ has played for. “I wanted to focus on kids,” Daniels said. He supports several AAU teams whose players have succeeded both on and off the court. Upwards of 70 percent of students on his teams have gone on to receive college scholarships, and their success on the court has been rewarded by Daniels. “I had to take them to Bush Gardens a couple of times,” Daniels proudly said.

Daniels’s organization is now looking to reach out to Haiti and help respond to the critical challenges it faces. This brings us back to the packed auditorium of the Banneker School. The K-6 Science and technology school partners with Harvard, MIT and Tufts, and is looking to support Mayor Jean-Yves Jason’s efforts to rebuild the educational infrastructure in Port-au-Prince. “There are currently no freestanding schools,” said Marlon Davis, executive director of the Banneker Academy. “We’re resource rich in that we can send material and support down there. We want to position ourselves as an international neighbor.”

Through his Q6 foundation, Daniels serves as an important conduit that allows those like the Banneker Academy who have the capacity to best focus their efforts. These efforts currently center on the Hope Academy Project, a new school to be constructed in Port-au-Prince for children orphaned from earthquake devastation. Daniels’ foundation will help create the sports and recreational programs for The Hope Academy.

Daniels and the mayor followed up their visit to the Banneker school by speaking at the Harvard University Law School. The day then concluded with a reception to honor Mayor Jason and the efforts of the Care for Haiti foundation. At the event, Mayor Jason spoke of the persevering spirit of Haiti and expressed sincere gratitude for Daniels’ support.

“Port a Prince lost over 300,000 people. Seventy-five percent of our city was destroyed and City Hall crumbled with the earthquake.” Jason said. “I dusted myself off like the people of Haiti. That has helped me to project a different image of leaders of our country.

“I left a meeting and flew nine hours from Paris to be here and say, Marquis, thank you very much,” a grateful Jason said. “I saw he was a sociologist and I am as well. That is why I know he really cares. It is a proof of love that cannot be translated to any other language.”

Mayor Jason went on to encourage Daniels to visit Port-au-Prince and ensured him that he would be amongst friends. “Just drop by Port-a-Prince one day and you’ll see how many people love the Boston Celtics,” Jason said.

Afterwards, a humbled Daniels took to the podium. He spoke of his desire to help Haiti and to visit Port a Prince. Daniels has worked to answer Mayor Jason’s call to “build hope together.” His efforts to bring about positive change will have a significant legacy, speaking louder than anything he could dream of doing on the court.