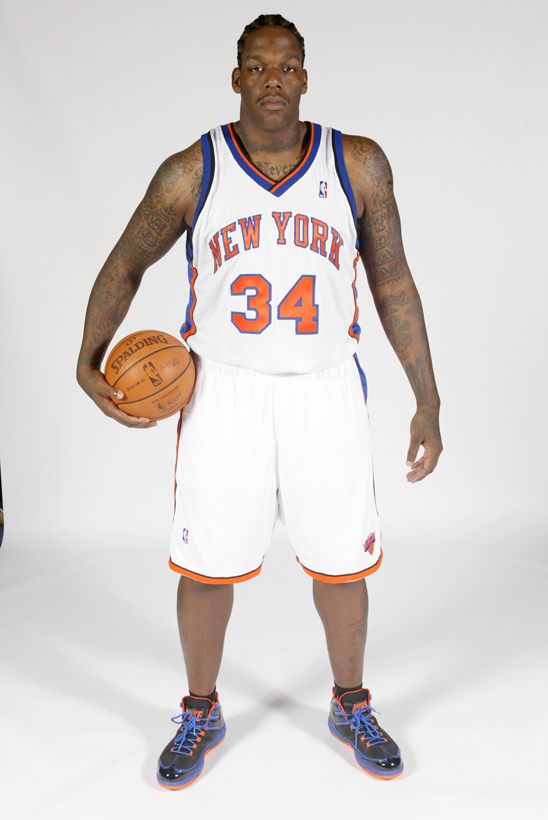 All hail the new Knicks. Now what exactly is going on there? We cannot look away, but so far, results have been beyond inconclusive. So today, in the spirit of utter desperation, Quotemonger takes a look at the words they’ve left behind.

“I don’t anticipate getting something done. As it stands, I don’t think it will happen. Donnie is still in the evaluation process with this team. I think he understands David has great value in the League, but is cautious to make a long-term commitment before he gets a feeling what direction his team is going.”

Translation: When I say “Donnie”, I mean “us.” We don’t know if David’s going to play center or get promoted to assistant hula hoop designer. Plus, every time he gets photographed with a smiling D’Antoni, it adds about 37 cents to his market value.

“I don’t want to make a flat statement, but I don’t think we’re at a point I can say we’re going to extend him.”

Translation: Geometry is the secret to all my thinking. No point in space can really be said to belong to the first, second or third dimension; that depends wholly on its interaction with other points in space. Straight lines are great when it comes to re-signing Chris Bosh, but here, you’ve got to let the natural order of things reveal itself on the plane of x, y and z. So when I say “extend,” I don’t just mean “re-up,” I mean “understand as a spatial entity that serves as a representation of his role on the team.”

Now do you get why I’m balking here? Oh also, mixed metaphors, they’re the window into my soul.

“I definitely want to keep Dave and Nate, but you don’t have to do it now, you could do it in the summer,”

Translation: Or I could just put on an Isiah mask and pretend the CBA is five lines long and written by the owners in invisible ink.

Jamal Crawford on all the uncertainty swirling around the Knicks:

“It’s the preseason…I don’t take it that serious.”

Translation: So wait, all you in the media actually think we’re figuring anything out around here? Also, no shit this was an Iverson reference–you fell right into the trap, since now you’re forced at act like D’Antoni’s going to have the 2008-09 Knicks, and a gulag set up for Isiah-era retreads, by Opening Day. This is campaign season, motherf*ckers, where everything’s in flux and talk is cheap. And then once it’s on, don’t expect no W.-like silliness from D’Antoni. You’re trying to trap him, too. Damn liberal media.

“It was probably not the wisest move on my part.”

Translation: What Jamal said. Or, as my grandpa used to say, “Why the f*ck not?”

D’Antoni, on where Curry stands:

Translation: I wish he would mysteriously disappear, or go up on a mountaintop with Tim Grover, and come back reborn as Amare Stoudemire. Or that I could subect him to such an thrilling, unforgiving ten minutes of basketball that he would shed a layer of flesh and mental sloth and climb out of himself, like one of those Russian dolls or some Sci-Fi channel original I watched last night with Duhon. Y’all are crowding me, back up a little. I see visions when I’m crowded.

The coach, on his ever-shifting rotiation:

“I am going to start setting my rotation and it could be that way. The door is never closed, but at the same time we are not going to lower anything we do for anybody. They are going to have to come up to us. If they want to play they know where they have to go.”

Translation: Just because I’m a genius, it doesn’t make the problem here any less daunting. It just means I’ll eventually figure out something. I’m Richard Dean Anderson, not Jesus.

Don’t hesitate to pre-order FreeDarko’s book, the ideal way to enjoy the League and save money at the same time.