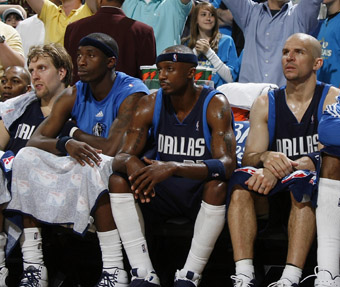 Darius Songalia on his latest run-in with LeBron:

Translation: Damn! I just gave you all a sneak preview of the LeBron-themed romance novel I’m working on. Don’t tell DeShawn, but when it comes to softcore James fan fiction, I’m the undisputed king. Under the alias “KINGME23”, of course.

DeShawn Stevenson, on another on-court episode from Wednesday’s game:

“I had five people trying to fight me. If I went to the mall by myself, I probably would have gotten jumped.”

Translation: What, you think I ever go to malls where there’s not a high chance of getting jumped? The mall is battle zone, son, and shopping is my weapon. No prisoners up in this Bloomingdale’s.

Dirk, on what’s next:

“Obviously we’ve got to bring a coach in that brings the best out of what he’s got here—open up the offense, have a lot more running, but still a guy who knows how to coach defense. You don’t want to go back to the Nellie days where we just run and gun and have fun and you get scored on every time.”

Translation: I’m like a child of divorce who’s being pulled every which way by feuding parents. I tap dance on the weekends, play paintball at night, and just hope that someone still loves me. Fun is part of me that died long ago. Does anyone have the Birdman’s beeper number handy?

Caron Butler, on who the authority figures are in the Wizards locker room:

“LeBron made a statement: ‘these guys are talkers,’ but unless you hear something from the captains, which would be myself and Antawn, don’t label that as the team. I’m the voice of this team and Antawn is the spiritual and emotional leader so unless you hear it from one of us, keep it moving.”

Translation: You see the badge on my chest? The plaque on the desk? The custom plates on the Monte Carlo? Respect the syndicate, my man, or else I’ll make sure Delonte gets called before Congress to testify about pizza sauce. That’ll be after Damon Jones accepts a guest slot on American Idol. I can take this team out of your hands in fifteen seconds or less.

Paul Milsap, on fans hounding the Jazz for autographs:

“They are our fans, so I try to [stop and sign] as much as possible, I am amazed at what some of them will go through to get an autograph. Sometimes there are a lot of people out there and you have to pass them by. But we do what we can.”

Translation: I don’t know what’s grosser, watching pre-teens snort Vivran just to prove they care, or the milk and fennel baths they get in the parking lot from their folks.

“He’s a much better NBA basketball player. Not unlike what the team went through, his transition was not an easy transition. There is an awful lot of upside with Kevin. Kevin is not going to top out. How good he can become, there’s not a limit to that.”

Translation: [clapping like a seal, braying for his job] See, I will totally put together the most convoluted quote known to man if it bolsters this team’s reputation by comparing our sole bright spot to the heap of shame upon which we lay. I will stay in space forever as long as I get rations. I will go without rations if I can just stay in space a little bit longer.

Lamar Odom, recounting the time Kobe picked up the tab for the whole team at somewhere pricey:

“We all started chanting ‘MVP MVP MVP’! I thought that was pretty funny.”

Translation: Say what you will about Mamba, but he’s too smart to try and buy happiness. He only spends when he is happy.

“Quite frankly, we missed guys who might not seem like they were the most important guys when it was happening—like Adrian Griffin, Marquis Daniels, Darrell Armstrong. Some of those components weren’t there. We were trying to find it, thinking that was what didn’t get us over the hump.”

Translation: Okay, you got me: My whole rhythm section up and moved on, and it bums me out.

“I think with a little more time we can be better. So we’ll see what happens this summer. . . We can build on the trade and hopefully attract other guys to Dallas.”

Translation: Either my brain is completely switched off right now, or I’m thinking happy thoughts of my younger days, when there was no salary cap.

Kirilenko on his team’s state of mind:

“We can’t put our head down right now. We’re still leading. We still need to get back home and take care of business.”

Translation: Yo, did you notice the singular on “head”? I’m Russian, not German, but I still make them Freudian slips. I’m talking about myself, and how I can’t start crying here. And by “going home to take care of business”, I’m referring to what I’m going to do to get my spirits up before the game. You know about my wife, no?

Joe Johnson on what went wrong in Game Five:

“I just think offensively and defensively, we’re not communicating and we are not running our sets. Then if we do run our sets, we’re not running them hard, so we are really making it tough on ourselves when the game isn’t that hard at all.”

Translation: When I spell it out like that, I’m not quite sure how we won any games in the first place.

“I don’t fight. That is so grade school. I stopped fighting a long time ago. I don’t need to fight anymore.”

Translation: Half of the Marine Corps belongs to me.

Raja Bell, searching for an explanation:

“They were way ahead of us mentally. And that’s a tough pill to swallow.”

Translation: I have a lot of experience swallowing pills to get my mental right.

“All those talking about us not playing defense, those guys never played defense in their careers. And they speak down on us.”

Translation: That sound you hear was about fifteen television executive penciling “next Barkley?” by K-Mart’s name in the media guide.

“Could I imagine circumstances without precedent where some court does something? It would be hard to imagine that there would be any circumstances legally that would preclude the Sonics from moving at the end of their lease, whether the court decrees that to be this season with two more seasons to be played, or after two seasons with the requirement that they play it out. I think that ultimately, despite the novel and face-saving attempts to construct causes of action, that the Sonics are moving to Oklahoma City.”

Riley on the Heat’s season this year:

“I really don’t want that to happen again,”

Translation: By “that”, I mean me having to be around on a regular basis while it happens. That’s for the new guy to endure.