Quotemonger: Of Coaches and Confidence 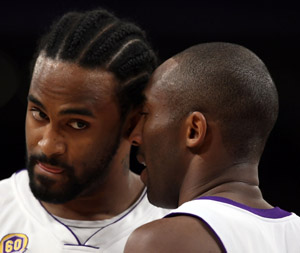 “For some reason, I feel we are still the better team.”

Translation: I’m a mild-mannered dude who has never been one to boast. In fact, there’s nothing in this statement that suggests the slightest bit of confidence. It’s like I looked up into the sky at night and saw a star, it spoke to me, and now I can’t get its voice out of my head. Oh and also, we’re playing a team that’s missing its best player, had first round problems with a Sixers team comprised entirely of under-aged suicide bombers, and never fails to somehow falter in the playoffs. Also, we’ve got Dwight Howard. So shut the f*ck up and let me listen to the poetry of the wind.

Jason Terry on his new coach:

“Coach Carlisle is a great coach. He has big-time playoff experience. His system is very balanced on defense and offense. He’s also well respected among the players because he’s played the game, and his clam demeanor makes him always in control, especially in adverse situations.”

Translation: Cut! Cut! Take away these sunglasses and hand me a scarf. Also, put more eye-liner on that mannequin. Make sure the argyle goes all the way down her back. If we’re going to make these comments count for something, they’ve got to play well in the wintertime, when people wake up and realize that Rick Carlisle is coaching in Dallas. Yo, turn that helicopter off! He can just stand on the snowboard, he doesn’t have to actually be participating in extreme sports.

The great Boki Nachbar on his future plans:

“[The Nets] totally helped me with redirecting my career and getting me going again, and I don’t forget that easily. From that aspect, I do want to stay with the Nets, definitely. But then just over the river, having one of the best coaches in the NBA, and a guy who’s not just a coach but my friend, that also is going to be a factor, too.”

Translation: It’s cool that they rescued me from the gutter, but no one wants to be reminded of that all the time. Or guilt-tripped over it. I’d rather go party with D’Antoni, now that I can afford a pair of pants and learned how to work his iPhone.

“Sometimes our offense dictates our defense. When we get off to slow starts, we don’t make a rotation on defense, we don’t make the extra effort—the second and third effort—to contest shots and it just trickles down, especially on the road.”

Translation: Is this some kind of practical joke, like a remake of Candid Camera that airs after Cheaters? Do we still have Garnett, Ray Ray, and Pierce up in here? They should be the ones giving this account; matter of fact, we shouldn’t even be having any problems. This season was supposed to be simple. I was told under no uncertain terms that all I had to do was not turn the ball over, and maybe hit a few jumpers. It was supposed to be like a vacation, but with our jerseys on. I even had a margarita blender installed by the bench. That’s the reason you go and Voltron up with three perennial All-Stars, right? So you can win that title without having sh-t to say about it?

Kobe on his injury:

Translation: If you’re Kobe Bryant, you don’t spend much time thinking about your mortality, or fallibility, or imperfection. But then some sh-t like this happens and alll of a sudden it’s like damn, I’ve got the same back everyone else does. I bet my skull isn’t made of titanium either. Anatomy is the one beast I will never overcome.

Turiaf on his hard foul:

“I hope the league sees that I went for the ball. I tried to grab the shot. I didn’t do anything dirty. I didn’t undercut him. It’s one of those freak plays that happen in basketball. Everybody jumped up and started calling me names, acting like I tried to hurt somebody. For me, I was just trying to make a play on the basketball. I don’t know, man. I don’t know.”

Translation: Believe me, believe me. I am good. I am pure. I smile and do wonders. Seriously guys, remember me for who I really am. Like seriously. Don’t let this blot out all my good works, al the joy I’ve brought to the world. I didn’t sleep a wink last night. This is killing me. I sent Ronnie Price some of those fancy frozen Omaha steaks and bought Memo a pizza, just because. Because I am overflowing with goodness. In fact, I am overcome by it. I am warrior of pleasant. And yes, yes, that is where the violence comes from. I lash out because I want so badly to make the entire world happy.

Nash on life after D’Antoni:

“You can’t really get a coach who’s just another coach. We should all be professional enough that we’ll do our best. It should be exciting for us to look forward to trying to win. It’s sad to see Mike go, but we’ve got to look at it as an opportunity to get better, and if a new coach can do that, we have to rally. We have to make it a positive. We all needed to change our approaches. If a new voice can do that, great.”

Translation: Holy sh-t, the party’s really over, isn’t it?

Kirilenko on trying to guard Kobe, even the gimpy Kobe:

“I had (a) little experience playing against McGrady in the first series, but right now, it’s whole different story, even though they’re pretty much same players. It’s different type of guarding and it’s … it’s … hell. Whole time you’re playing against [Bryant], you’re expecting something. You can’t really get close. You can’t really give him a space, so it’s a game. It’s It’s like (in a) casino, I always try to guess, and it’s like 50-50 you’re going to get it.”

Translation: Even if I knew English, this wouldn’t sound any different.

Anonymous source on how the Bulls felt about D’Antoni:

“They wanted to play for Mike.”

Translation: Ha! Not only did they miss out on the NBA’s resident boy genius, they also could’ve had the most perfect marketing campaign ever! Evoke the past, make friends with it, then brush it aside as the future envelopes this brave city. Just off the top, without consulting my notes, what about “THERE’S A NEW MIKE IN TOWN.”

Bucks GM John Hammond on, umm, being a GM:

Translation: This is the kind of thing you say when you’re a general manager in professional basketball. One day, you’ll understand.