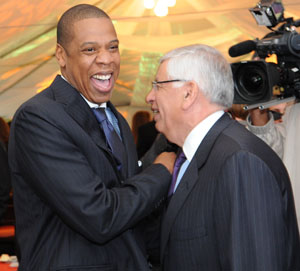 Richard Jefferson’s agent on how dude feels about New Jersey:

Translation: Growing up, RJ always wanted to be Indiana Jones. Now, that dream has come true, in the form of life as a New Jersey Net. Every day is an adventure, and he’s the one wearing the safari hat.

Pat Riley, on why he might not want Beasley:

“We have a very good power forward in Miami right now.”

Translation: I have been watching TBS for a month straight in my office because the remote’s on the window sill, mocking me. Don’t test me.

Jeff Hornacek, whose dad was a coach, on being interviewed by the Suns to be a coach:

“Everything my dad said seemed to click. I’ve had those thoughts in my head since I was 5.”

Translation: My dad talked a lot about how important it was to be decent, give back to the community, and wait till the last guy got up the hill before pitching camp. Stuff that didn’t matter the whole time I was in the NBA, but coaches have to say to fill up space during timeouts.

Dan Gilbert, on how great things are going in Cleveland:

“We have no reason to doubt with LeBron James, or any player, and there commitment to be with the Cleveland Cavaliers based on the organization we’ve built and we are building. That’s something I don’t worry about because I believe we do the right things, not only with LeBron but any player who would consider us one of the teams when they’re a free agent.”

Translation: I have never heard of Jay-Z, don’t read the papers or watch the games, and have a tank of nitrous oxide connected straight into my frontal lobe.

Ray Allen, about his slump in the Cleveland series:

“Personally, it’s been tougher than anything I’ve ever seen. Just looking back on the times we’ve played Cleveland throughout the year and in the series. I just think they did everything they could to try to take away anything I had. They made it tough for me to create any type of rhythm. So kudos to their game plan – they made it tough on a lot of us.”

Translation: Some folks say I have a bright future in politics. I started listening to them, and decided to start watching a lot of CNN when we’re on the road. That’s how I learned the importance of staying on message when the going gets tough, and why I’ve been repeating this same passage verbatim for the last week.

Pau Gasol gets ready for the Spurs series:

Translation: Did you ever see those fresh tees with me done up like Jesus ? Those really went to my head, or at least interfere with my vocal cords now and again. I also got a custom bumper sticker that reads “My other car is the Crusades.”

Leon Powe, when told that the Celtics would cease and desist their pre-game pyrotechnics:

“Oh man, they can’t do that. I think that’s something that we all get into.”

Translation: I try and keep a low profile on this team. And I don’t raise a fuss when my minutes fluctuate wildly. But damn it, I’m about to cry a little, and I want to make sure everybody knows why.

“Part of it is selling of the sensational. Like: ‘Oh my gosh! Look at that guy pound his chest after he made that basket.’ We’re not Vegas. We don’t have this me-against-the-world attitude. But that’s what sells now. So they need to come up with labels for us.”

“The highlight I think of my career is when two teams called to complain about the officiating and one team won.”

Translation: The rest is classified.

Translation: If you’re going to reward teams for playing terrible, then damn it, reward them. Anything else would be dishonest. And for too long, I’ve trusted you, Stern. I’ve trusted you!