Taking the Celtics-Rondo relationship to the next level. 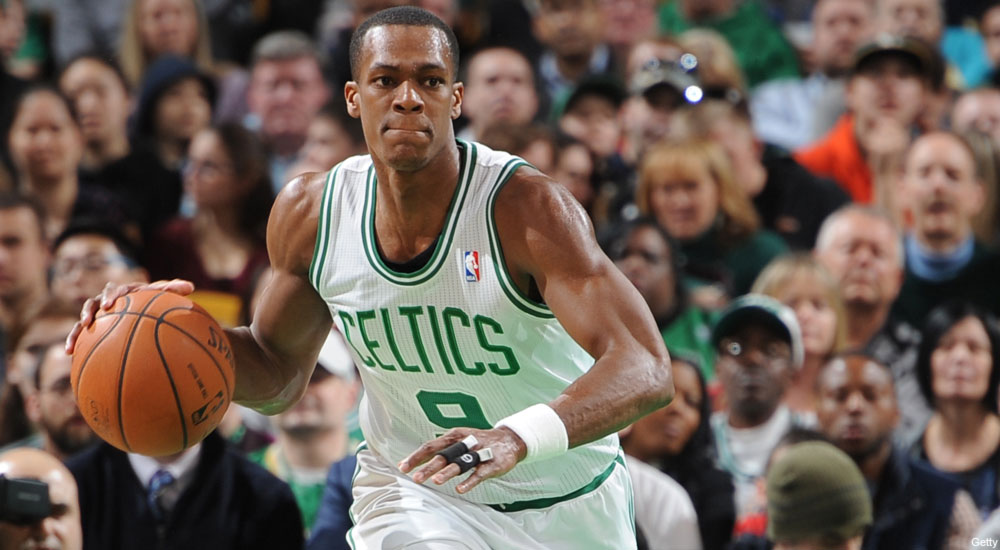 As Pharrell has said, “It might sound crazy what I’m about to say.” But what I’m about to say is a variation on a theme that was used by the one and only Red Auerbach. Red did it with Bill Russell in 1966. And he did again over 12 years later in 1978 with Dave Cowens. He made them player/head coaches and motivated them to keep playing at a high level.

How do you make sure that your most talented and valuable employee, a person who believes in the team concept and is an independent thinker, does not let his values conflict with each other, but instead enhance each other? And how to motivate him to not leave when he becomes a free agent?

The 2007-08 Boston Celtics’ championship season is almost beyond the ken as you look in the rearview mirror. Today, seven years later, the last man standing from that championship team, who was a 21-year-old kid when that season began and that team’s starting point guard, and has thrilled Celtics fans for many seasons since, might turn out to be the key to whether the next Celtic championship is sooner rather than later.

Rondo can leave the Celtics at the end of the season as an unrestricted free agent. If he does, the Celtics would lose him outright with nothing in return. For that prospect alone, it’s not impossible to think that Rondo could be traded.

So how can the Celtics motivate him to stay with the Celtics after this season? Listening to Rondo address the media at the Celtics’ practice facility in Waltham, MA, on Celtics’ Media Day, it was clear that Rondo has plenty of self-motivation to play well. Rondo said he wanted to stay in Boston and felt embraced by Celtics fans. The organization had been great to him. Ainge communicates well with him.

Brad Stevens is the most positive coach for whom he has ever played, said Rondo. Under Coach Stevens, Rondo feels he is free to play the way he wants. Coach Steven’s offensive coaching philosophy—giving players more freedom to “read and react” and to use on-the-fly options—is very well suited for Rondo.

Rondo wants to prove that he can play the game as well as he did before his significant ACL knee injury in January 2013 which caused him to miss the rest of the 2012-13 season and the first half of the 2013-14 season. He returned to play in January 2014 and played in only 30 games for the season. The injury has given Rondo a sense of the fragility of his basketball career. Just playing basketball and to have fun and love doing what he does best, means a lot to him.

The challenge: accepting the strategies of his coaches and the abilities of his teammates on a rebuilding team, especially if he comes to think there are better ways for the Celtics to be successful.

Rondo will be the floor leader of a young team coming off a 25-win season with a second-year head coach. After listening to Rondo speak and then reflecting on his career, the song “My Way” came to mind.

I had heard the song a few days before. I had seen a replay of Derek Jeter, upon playing his last game at Yankee Stadium and getting a storybook bottom of the ninth walk-off winning hit, saluting the Yankee fans as he walked around part of the Stadium infield. As he reached second base on his way to the shortstop position, Jeter was accompanied by the voice of Frank Sinatra singing “My Way”.

Many people can find meaning in some of the lyrics of that song, even if the end of one’s career is not near. But I also think of Sinatra when I think of that song and the kind of person he was—a great artist who did things his way. The lyrics were written specifically for Sinatra.

The record shows I took the blows and did it my way!

Although Rondo is an independent thinker, a fierce competitor who doesn’t back down an inch and won’t concede anything to an opponent, and has brought originality and creativity that is downright artistic. He’s a playmaker, a pass-first, shoot-second player who has showed his mettle by playing hurt and coming to the defense of his teammates on the court. Rondo wants to use his great talents to win. But he has a mind of his own as to what he thinks makes sense.

Sinatra very much did it his way. Yet he was always grateful to his “team” that helped made him look good, not forgetting to praise the musicians who played for him and the composers who wrote for him.

If the Sinatra comparison doesn’t work for you, there is one a little closer to home. Bill Russell.

Russell brought originality and artistry to the center position in a number of ways. There were the large numbers of blocked shots, rebounds and outlet passes that triggered the vaunted Celtics’ fast break. His blocks didn’t send the ball out of bounds and back into the opposing team’s possession, but deft deflections that often resulted in his team gaining possession.

The great Bill Russell was all about team play and winning, but he thought for himself and made his opinions and feelings known.

During his playing days, Russell said in his 1966 autobiography, “Given a choice, I would play for no other man (Red Auerbach) in the world.” Russell felt that way because Auerbach was thoughtful and collaborative with his players, despite being dictatorial.

Auerbach did not hold to convention if it didn’t make sense. He rarely had Russell scrimmage at practice. Why create additional fatigue for your key guy who rarely missed a game in a long season and who played almost every minute of the games (he averaged 42 minutes a game in his career).

“Plus, no one had ever seen my unorthodox style before, so no one knew what it was. I had to dismiss his method from my mind and find ways to develop myself on my own. I wasn’t trying to create conflict—he knew I respected him as a man. I wasn’t trying to draw attention to myself, either. I was trying to improve my team’s chances of winning basketball games. Results were all I cared about.”

Although it did not happen in Russell’s case, players who want to do it their way can often upset team chemistry, even if they may be right.

Rondo as a player/coach, would embrace his new responsibilities with hard work. He would gain a different perspective of coaching and a different perspective of his teammates, which might expand his notions of what make sense. And he would have more authority to implement his ideas. Rondo would be even more motivated to play well on the court in order to try to help his coaches and teammates succeed. Rondo would want to prove his good relationship with Coach Stevens can endure.

After Red Auerbach retired as Celtics coach in 1966 season, he made Bill Russell a player/coach. Before Russell accepted, he and Red each made their own list of who else would be an acceptable head coach. None of the names on the lists matched.

Auerbach knew that the Celtics were still capable of winning for a few more years with Russell playing well. He did not want to appoint a new coach that could mess with Russell and make him unhappy.

Early in the 1978-79 season, with the Celtics coming off a losing season and continuing to play poorly, Red made Dave Cowens at the age of 30 the player/coach. Cowens coached for just that year, and then played one more year for the Celtics alongside rookie Larry Bird, helping them get back to prominence as they went from last to first in the NBA’s Eastern Conference regular season.

Fans of the TV show Married with Children should recognize the song “Love and Marriage” that plays during the introduction. It is sung by Frank Sinatra who recorded the song in 1955. (“My Way” was released in 1969 when Sinatra was 53, two years away from a short-lived retirement.)

Rondo has a long way to go before he contemplates a career farewell song. But “Love and Marriage” may be the appropriate song of the moment. Substitute the words “Rondo and the Celtics” for the words “love and marriage, and you might see what I mean.

This I tell ya brother, you can’t have one without the other.

Try, try, try to separate them, it’s an illusion.

Is separating Rondo and the Celtics an illusion? Stay tuned.