“It’s hard to turn it off—everything you gotta deal with,” he says. “I’m just wired that way. I can’t not be ahead of the curve.”

Rondo is the curve. Think Rosie Perez in White Men Can’t Jump, rattling off more foods that start with the letter Q than any other human knew existed. Rondo’s mind holds more than the minds of his peers, his mind reasons quicker than the minds of his superiors. And thus, he’s perceived as an NBA enigma.

The straight-A student who doesn’t get straight As because he’s sleeping in class, bored out of his mind of the monotony, so craving a challenge that he becomes one himself. That was Rondo. In high school, he used to look so unenthused with advanced math that his teacher actually thought he was cheating.

“I was looking at his tests and these long, drawn-out problems that only me and people in my department can do with no work. I said, Yo, he’s cheating off somebody,” Doug Bibby recalls.

So next time around, Bibby gave Rondo a different test than the 29 other students in his class. The result was the same.

“Dude gave me the test back, no work with just answers. And guess what? Every problem was right. The kid is just brilliant.”

“He became my assistant coach. We were similar. From the classroom to the basketball court [to] the perspective he looked at the game. I saw that at an early age,” Bibby says. “You have to let him be himself.”

Muzzled and suppressed after being traded to Dallas, then hidden among the constant instability in Sacramento, Rondo knows he’s been somewhat forgotten by the general public. He seems more amused than bemused by it.

“I set individual goals that I accomplished last year and I was in Sacramento,” Rondo says. “If I was on TV and I was in the East, I’m pretty sure leading the League in assists wouldn’t be swept under the rug so much.”

Only the drama gets mentioned when talking about the Kings, and it can affect even the most decorated of guys.

“I wouldn’t say it was chaos, but the media portrayed it as chaos,” Rondo says. “We had ups and downs, we went through certain situations. Publicly talking about firing our coach, didn’t fire our coach. It was a lot of distractions versus what we were able to do as a team.”

The list of players who’ve led the League in assists at least three times in this millennium all have tickets punched for the Hall: Jason Kidd, Steve Nash, Chris Paul.

Three years ago, you couldn’t have a conversation about the best point guards in the NBA and not have Rondo’s name on the tip of your tongue. There was no better big-game player at his position, no more feared competitor in a winner-take-all environment. Then, only Paul’s mastery could touch Rondo’s wizardry.

In 2016, how far do you have to go before mentioning Rondo?

His answer says little but speaks volumes: “I’m not fueled by that. I just want to be the best.”

Rondo’s physical gifts are undeniable. His long arms can leave those foolish enough to try grasping for air—like the video of Rondo toying with Trey Burke. But the narrative on Rondo changed from being the “difficult but worth it” type to “problem child” seemingly overnight, and he’s self-aware enough to know exactly where it comes from. Even if you stumble through your words trying to find the right way to phrase the question about his reputation, Rondo sees mercy and helps you out.

“We can say it: Rick Carlisle,” he says bluntly. “It was a learning process in itself.”

It didn’t take being traded from Boston to Dallas for Rondo to appreciate a coach not being threatened by him, but it certainly highlighted the fact that he needs freedom, and that genius is not always embraced.

“Rick ran things differently,” Rondo says. In Boston, “I could call a play on one side of the floor and flip it on the opposite side to confuse the defense. In the beginning [in Dallas] I just had to bite my tongue with how things were run because they won there and I won [before].

“The incident that everybody blew up, Rick and I were on different pages on that particular day.”

The two had disagreements in the Playoffs a couple years back, a situation both parties should find regrettable. But the reputation has followed only Rondo. Has it affected him negatively? 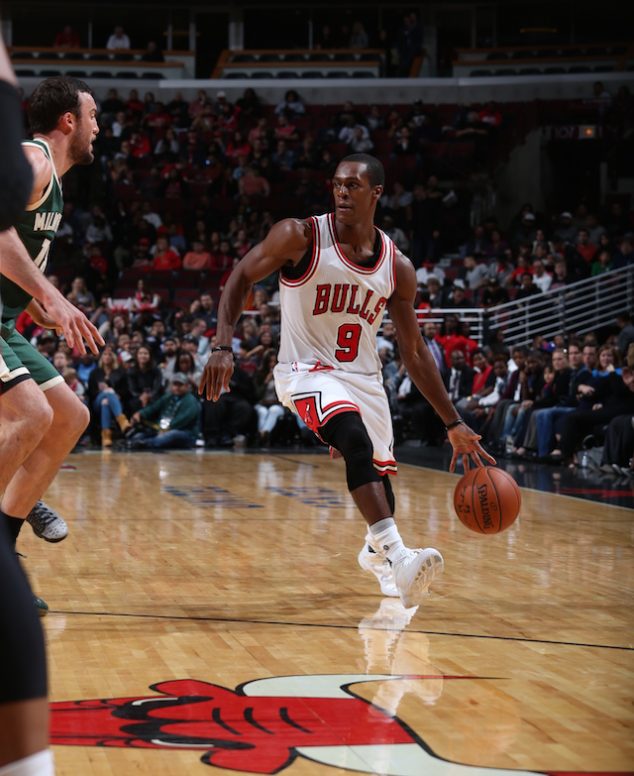 The new point guard for the Chicago Bulls looks around at his surroundings, his third team in three years, hoping he’s found a place that will accept his genius the way he himself has learned to over the years—with patience, not frustration.

“Doc [Rivers] would tell me not to get bored with the process. Things would be monotonous going over the same thing over and over again,” he says. “At times I got frustrated early in my career but over time I grew to understand everybody has their own learning curve and everybody learns differently.”

Wide-eyed rookie Denzel Valentine marvels when Rondo tells him he can’t watch basketball just for the sake of entertainment value, as his mind won’t stop him from scouting and taking notes of opposing players’ tendencies, even if they’re not on the upcoming schedule.

It takes time to understand the brilliance of Rondo. If the Bulls exceed the .500 ball most analysts see for them in 2016-17, it’ll be because Rondo manipulates seemingly ill-fitting chess pieces to his advantage. It’ll be because Rondo figures out a way to make the grouping of himself, Jimmy Butler and Dwyane Wade (aka the “Three Alphas”) mask some roster ills and coaching inexperience.

“I was able to quarterback with so many future Hall of Famers. I learned how to keep guys happy,” Rondo says, referring to his days in Boston. “I had to laugh about it—myself, Jimmy and D-Wade ‘not getting along.’ I’ve seen it first-hand with the Big Three. Three guys with different backgrounds and they were able to come together.”

He kept Kevin Garnett, Paul Pierce and Ray Allen lathered by counting touches and shots in his head, and he’ll have to do that with Wade and Butler to ensure things work as harmonious as possible.

Before signing with the Bulls, Rondo watched film with Bulls coach Fred Hoiberg for hours on end, the two bonding over Rondo’s intellect, chemistry developing over Rondo’s immediate grasp of a complicated offense.

Listening to Rondo rattle off the names of former teammates like Boogie Cousins and Monta Ellis, it’s clear he gravitates to players whose passion can be misunderstood, whose intentions can be misinterpreted.

“It’s how the perception is. You can’t judge a guy, seeing him 82 games,” Rondo says, perhaps transitioning from describing them to describing himself. “He might be fiery some games and he’s not a yes man [who does] everything he’s told to do and not know what’s going on. Explain it to me, let me understand why we’re doing certain situations. I’m not going out there and doing it for no reason. It has to make sense.”

And of his new star teammate Butler, Rondo says, “I wanted to play with guys who competed, and Jimmy was at the top of the list. Jimmy’s not afraid to punch a guy in the mouth, figuratively speaking.” 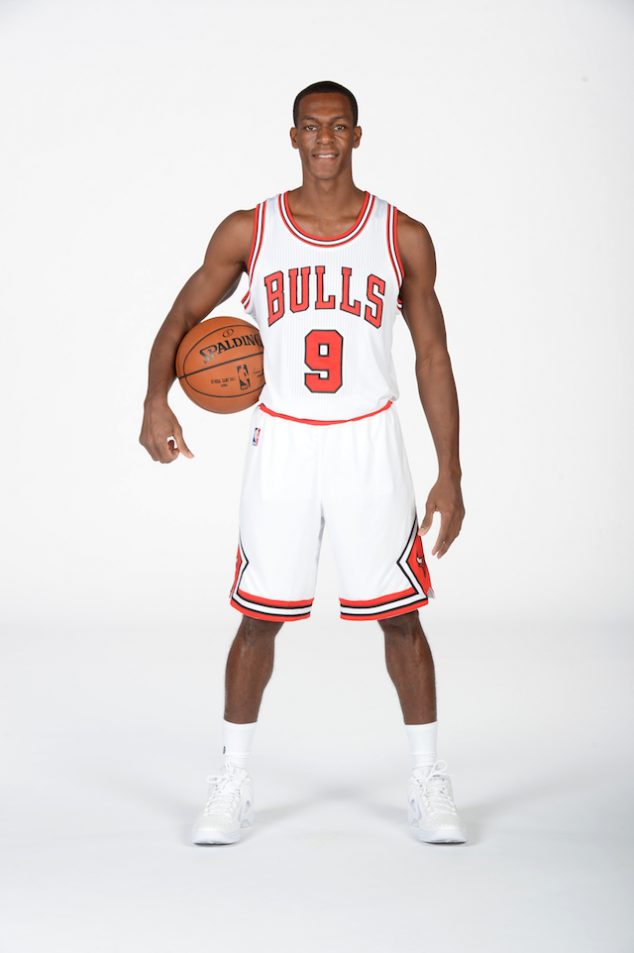 Rondo walks through the United Center after a morning shootaround, hoping to get some extra shots up in his new home. But a curtain blocks off the court. He turns and asks, “They’re supposed to be gone by now, right?”

Inside, a fellow genius is at work, a man who was gifted and cursed in the same way as Rondo. Milwaukee Bucks head coach Jason Kidd has his team’s shootaround running a little longer than expected.

The two men later nod and exchange pleasantries as members of an exclusive kind of brotherhood.

“It can be hard—you’re a competitor and you’re trying to win,” Kidd says a few moments after, looking in Rondo’s direction. “When you can think multiple steps ahead, sometimes that scares people. I think he has a gift and he uses it well. That’s why he’s one of the best at what he does.”

Rondo’s clairvoyance is on display a few hours later in his first preseason game in a Bulls uniform. His dart-like passes often escape the fingertips of his teammates or, in some cases, miss the mark altogether. He isn’t dishing to where his teammates are or where they’re going—he’s throwing passes to where they should be, where they better be, and where, in time, they will be. He’s reprogramming them from past habits, one pass in the face at a time.

His voice cuts through a building filled with nearly 20,000 people just as it does in one with 30. He’s the man who stops Bulls practice because “too many people are talking who shouldn’t be”—a player who knows that while the Bulls were too quiet last season, it doesn’t mean he’ll allow it to be a free-for-all just because. “I feel like everything in life happens for a reason. Me being here now with those two guys, with all these young guys, which I was [once], that’s how life works.”

Kidd, who overcame the nickname “Ason Kidd” (no J…) by sinking the fifth most three-pointers in NBA history, knows a little about dealing with a reputation and believes public perception of Rondo should change immediately.

“We label everybody and labels tend to not be easily erased,” Kidd says. “The perception of ‘can’t shoot’ can follow you, ‘not coachable’ follows you. It’s the unfortunate thing. I think Rondo is one of the best at what he does. What always comes up: Is he coachable? He’s a basketball player and does what he does at a high level. He’s a champion. It shouldn’t be a question.”

Until then, Rondo will be listing off those foods that begin with the letter Q, because the mind of a genius doesn’t have an off switch.

DeMar DeRozan: Fred VanVleet is ‘One of the Best Point Guards in the League’

Andre Drummond out against Brooklyn Nets with Left Shoulder Sprain

From the NBA to Top Names Around the League, Here’s How the Basketball Community is Tapping into the Art World