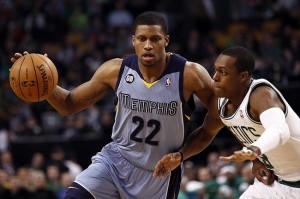 That the Memphis Grizzlies are considering trading Rudy Gay is the NBA’s worst-kept secret.

The Grizz are reportedly talking to a number of teams around the League about taking on Gay and his big-money deal, and one of the organizations on the other end of the phone line happens to be the Boston Celtics. Rajon Rondo, for one, is a fan of this potential development.

Rudy Gay, who now admits that the trade rumors are starting to mentally affect him, says that Rondo wants him as a teammate in Beantown.

Whether it’s close friend Rajon Rondo, Jarrett Jack, or other basketball colleagues, Memphis Grizzlies forward Rudy Gay has been leaning on his circle of NBA friends to get him through recent trade speculation. While Rondo, according to Gay, is giving sound advice, the Boston Celtics guard can’t help being a little selfish.

“It’s hard to talk to [Rondo] because he is always saying, ‘We need you over here. We need you over here,’ ” Gay said. “So it’s not easy talking to him. But he’s being a friend, just telling me about keeping everything together and he makes you feel like you are still valuable.” […] Gay, 26, said he would like to stay in Memphis, but added that he would be happy wherever he plays. “I’m more than just a basketball player and wherever I am, or will be, or wherever I go, they are going to realize I’m more than just a basketball player,” Gay said. “I can give just as much as I did here, if not more.”

Rudy Gay believes the Memphis Grizzlies — a team increasingly being thrust into the spotlight — is a true NBA championship contender.