Raptors Call Out Their Coach 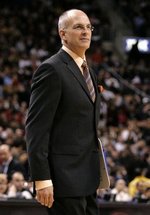 The Toronto Raptors were humiliated on the road last night, receiving a 31-point drubbing from the Atlanta Hawks. It was the kind of loss that gets coaches fired. Add in the harsh criticism from his own players, and Jay Triano may be seeing the last of his days as an NBA bench boss.

It didn’t help that the guy who he replaced (Sam Mitchell) less than a year ago was sitting in the stands, no doubt taking delight in the fact that things haven’t changed for the better without him in Toronto.

From the Toronto Star:

“Every time something happens it’s always, `It’s okay, it’s all right.’ It’s not all right,” said Jarrett Jack, the reserve guard. “Problems go by without attacking them or challenging them or bringing them to the forefront and getting them solved. We can’t keep keep putting them to the back of the bus and just saying, `That’s okay.’ It’s not all right. Everybody can’t walk on eggshells around here and say, `We’re playing good basketball.’ We’re not.”

Said Antoine Wright: “You’ve got to address (the defensive issues) and you’ve got to show people on tape. It’s not personal. If you want to win, you’re going to have to make some sacrifices.” Wright, who has criticized Triano’s schemes previously, was the only Raptor not to see the floor on Wednesday. He said Triano has failed to “call out” under-performing Raptors because unnamed teammates are “too sensitive” to criticism.

Chris Bosh, obviously the most important voice in the Raptors’ locker room, didn’t go after his coach, but called the performance last night (and all season) a “total embarrassment”.

After spending a boatload of money on free agents this summer, Toronto was supposed to be better than the 7-13 mess we currently see. In the NBA, that usually means that someone is going to have to take the fall for this, and that time is coming soon.