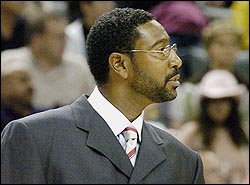 Can you believe that the regular season is only eight days away? That’s right, only eight days away from the League’s 61st year. Before that jumps off, some of the best hoop writers from around the web would like to say a thing or two about their respective teams, and we’re more than happy to give them the floor.

(Programing note: In case you missed it, over the weekend we previewed the 2007 Nets and Bobcats.)

Today, Tas Melas from The Basketball Jones helps us preview his team, the Toronto Raptors.

SLAM: Andrea Bargnani. He’s from Europe, you know? What can we expect from him this season?

TM: Off the floor, a lot of misinterpreted quotes. On the floor, he’ll show flashes of his tremendous skill but there will also be a lot of learning for the big man. So far in camp, we’ve seen him use that gorgeous Dirk-like stroke, we’ve seen him go left and right and get to the rim, but we’ve also seen him foul 5 times in 14 minutes during the Raps’ first preseason game. He has come to camp with the mindset that he has a lot to learn and he’s displayed his desire to work, so coach Mitchell won’t be afraid to throw him in. You can look for members of the coaching staff pulling him aside and having a couple of words with him about what he could be doing better. I expect him to play about 20-25 minutes, average 10 points, 4 boards and a couple of three-pointers a game.

Fred Jones always seemed like a player who should have been doing more in Indy. Can he thrive in Sam Mitchell’s system?

We will see Fred Jones style and profile all over the court this year. Jones feels a sense of freedom after getting out of the shackles that is Rick Carlisle’s system. He has made comments about going back to playing the free-flowing style the way he did in high school and college. Expect him to get out on that fast break and show people why he was the 2002 Slam Dunk Champion. Even though he will likely be coming off the bench, Mitchell has shown he trusts Jones by allowing him to handle the rock when running his trademark pick-and-roll. 14 ppg, 4 rbs, 2 ast, 1 stl.

Speaking of Sam, how does he still have a job? The guy has gotten into physical confrontations with players (allegedly); he “led” the team to a 27-win campaign last season; and according to Lang he runs the same play all game long. What’s the deal here?

This is definitely the make or break year for the well dressed coach. I think you can cut him some slack because he hasn’t had the horses to make it work. His playbook was also limited by the lack of trust he had in his players. He took this job as a rookie head coach so no one was surprised when he made some mistakes (see: making Rafer Alston cry). However, the excuses end now. He’s been given several good parts that he was publicly asking for and he has stable management that has his back – especially the support of senior advisor Wayne Embry. So, GM Bryan Colangelo will give him the benefit of the doubt. That being said, if Mitchell can’t produce, don’t be surprised to see a change when Sam’s contract expires at the end of the year.

Chris Bosh is one of the best young talents in the Association. Do you think it bugs him that fellow 2003 draftees ‘Melo, ‘Bron and Wade get all of the pub?

Not at all. Chris is not that kind of guy. He was a little upset that he wasn’t getting the playing time he thought he deserved playing for the US [at the World Championships] this summer. That peeved him off. But he just wants to show what he can do on the court and let everything else fall where it may.

Alright, enough foreplay, how will the Raptors fare this season?

37-45. Good for third in the Atlantic, and just out of the playoffs.