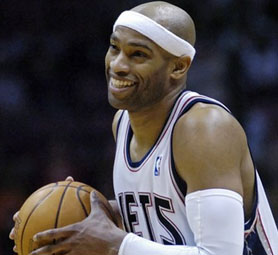 Unless hordes of Canadians start spewing sentences filled with expletives aimed at Vince Carter or we get a sea of enraged Raptors fans flipping Vince the bird, I’m not going to be impressed.  This series might be getting more pre-Playoff attention than any other (even the Suns-Lakers rematch) and it all centers around Vince’s return to Canada, in the Playoffs, as a Net and how he’ll be received by the very fans he scorned during the ’04 – ‘05 season when he basically went limp on the franchise he had previously lifted to brief national relevance.

Never mind that the Raptors, alone, are an intriguing story:  a young squad – with an underappreciated superstar (Chris Bosh) and one of the few “true” point guards (TJ Ford) – that new GM Bryan Colangelo quickly fashioned into the Suns of the East on the merits of shrewd, but controversial, trade (Ford for Charlie Villanueva); a young coach (Sam Mitchell) that was on the verge of getting canned, before turning the squad around and possibly snagging Coach of the Year Honors (he’s a runaway for Best Dressed, with the natty George Karl coming in a distant second).  Or what about the fact that, as uplifting of a story as these Raptors are, they could easily have an ugly end to the season, getting quickly dispatched by the more experienced Nets?  One week Toronto is looking at the gimpy Wizards as an easy first round opponent, then all of sudden here comes New Jersey on a 10-3 spurt.

But the actual series has been a mere backdrop to this Vince Carter thing.  This would be appropriate if Vince compromised a franchise like the 76ers or Knicks or some team in a city with vile fans that know how to get angry and behave like rubes.  A simple chorus of boos just won’t cut it and I think that’s all the Canadians have in store for Vince.  This is bound to be underwhelming.

As for the series, it’s not above reason to expect that this match-up will yield some of the best play over the next week.  Both squads like to run and both squads feature upper echelon point guards.  In the NBA, that may be the most full-proof way of ensuring that the play doesn’t devolve into sloppy amateur-runs or stall-ball ugliness.  And both Vince and Bosh have something to prove.  Vince has this season’s most important stage to prove he’s worth yet another max-contract.  Bosh has his first postseason chance to prove he’s a franchise stalwart worthy of mention with the ’03 triumvirate (Bron-Melo-Wade) that cast a pretty dense shadow.  One would expect for this motivate some inspired individual play from them both.  On the bench, you have two of the leagues best young coaches, who appear to be polar opposites.  Mitchell is a former pro that rocks an S-curl and made Skip cry.  Frank would come off the bench in a rec league and isn’t going to make anyone cry, least of all Mikki Moore.  Of the two, Mitchell has the toughest job: corralling a young squad and coaching them past a team of vets.

And did you know that Ason “No-J” Kidd almost averaged a triple-double?  He dished nine assists and grabbed eight boards to go along with 13 points.  If I’m picking one player to control the series, it’s Ason.  There’s a slight possibility that bruisers like Collins and Moore might be able to rough up Bosh and his semi-finesse tendencies.  Vince might sprain his ankle.  Ason doesn’t submarine.

So I guess my prediction is this: Toronto, across the board, is going to disappoint.  The fans will be far less spiteful and disrespectful than they could be and the Raptors will see a premature end of their season after five games.  Yes, Vince will take his two thumbs and hold out the front of his Nets jersey as the final buzzer sounds, in Toronto on the 1st of May.