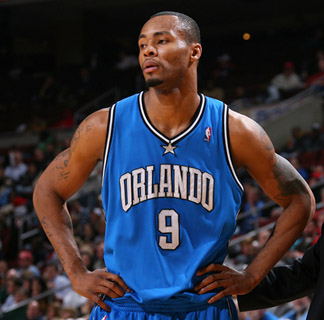 The Sixers won a game they were supposed to win against the Magic. Orlando, coming off a road win in New Jersey, were a step behind the youthful legs of the Sixers and were never in it, and fell 101-89 as a result. The Sixers led the entire game and are beginning to resemble what is considered a good team. Mo Cheeks is a lot more confident in his post game press conferences and heaps made praise on his up and coming squad. I’ve been catching mad wreck from some of the players for my early season piece The Sad State of the Sixers, and rightfully so. This team now plays hard and the fans have been showing their support–which is commendable considering this is Philly. The Sixers are scratching and clawing for loose balls which have recently led to an open court game teams have had trouble dealing with. Last night, they had three players with at least 24. Reggie Evans is pressing all over the floor and has been instrumental in creating a lot of opposition turnovers.

Andre Miller was able to score at will from the outset and gave the Sixers an early push they never relinquished. He gives the team an identity they just didn’t have earlier in season and recently has been between 8 and 10 dimes in the first half. Andre bullied my fam Jameer Nelson tonight and is the leader of this squad–even with Andre Iguodala on the court.

The Magic are one of the closest teams I’ve seen play this year. They are something to see right before the tip with all their dap and chest bump rituals. I thought Dwight Howard (I call him the Leviathan–compliments of TSF reader The Last Poet) has been getting a lot of shine and I wanted to change it up and speak to Rashard Lewis to hopefully get a sense of his NBA personality. In his first year with the Magic, Rashard ranks first in the NBA in three point attempts and 2nd in makes. He seems comfortable getting to spots on the floor considering all the talent he has around him, He’s simply one of those cats who lets his game do the talking and operates in a smooth fashion within the team dynamic which eventually will assure his team being considered among the NBA elite…

MT: What’s the biggest difference between now and your time in Seattle?

RL: Well this is the East Coast and I played on the West Coast for nine years (Crazy ain’t it…nine years). I have a big man on my team and we never had a dominant force my nine years in Seattle. It was run and gun… shoot a lot of threes.

MT: How do you become that great player? You’ve always had talent. How do you challenge yourself?

RL: Just by playing ball, man. I was always up and down in my career in Seattle. We didn’t make the playoffs most of the time. I’ll get there by playing ball on a championship level and do whatever it takes to help this team. That’s what will get me there.

MT: What’s your favorite movie and why?

RL: American Gangster. Great movie. True story. I like movies that talk about somebody’s life in interesting facets–especially if they were in a position of power. Plus Denzel Washington starred in the movie, so….

RL: As an NBA player, I’m a role model regardless if I’m on or off the court. People will always recognize my face and recognize me as an NBA icon. You have to always watch what you say or do because people will remember and pass it on–especially if it’s bad.

MT: Can your versatility ever be a detriment?

RL: My versatility helps more than anything. It’s better to be our on the floor and be able to do so many things. When you play more than one position, you get more minutes.

MT: What’s your biggest obstacle personally and within the team construct?

RL: Chemistry. This being my first year with the team and the organization as a whole. In your free time and even when you are on the court, you have to figure out what type of player each member of the team is if you want to be successful.

MT: What did you learn the most from your time with Ray Allen?

RL: How to be professional. How to take it one game at a time and be consistent throughout the season. It’s the little things he said or did that helped me become the player I am. Things like getting proper rest, eating the right foods, and making sure you take care of your body. That’s why I think he’s a great player to this day and as long as he’s been the league.

MT: When did you become comfortable and fluid with your height?

RL: When I got to high school. I wasn’t comfortable in junior high, but when I began playing varsity in high school and started to do big things then I started focusing on my future and applied myself to get to the next level.