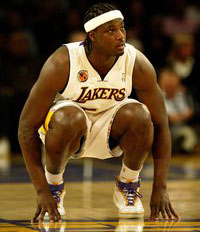 Kwame Brown has never been known as the toughest-minded guy around; hell, just ask Michael Jordan. After years of being the object of ridicule, it appears as though Kwame may finally be building up some self-esteem.

Brown’s new (and, um, loud) teammate Rasheed Wallace tested his mettle by talking all kinds of trash at him during practice.

“There is no way on God’s green earth that you can lock me up, ever, ever, ever,” he said. “You couldn’t lock me up in when you were in D.C. or L.A., nowhere. You’re lucky you never had to face me in high school.”

To pretty much everyone’s surprise, Kwame came right back at ‘Sheed. From the Detroit Free Press:

“We were jawing all day at practice,” Brown said. “I told him he was in the trunk and I’m locking him up. Sometimes just because you’re the loudest, it don’t mean nothing.”

“I thought it was good that he was talking back to Rasheed,” Michael Curry said. “He kind of made some aggressive plays, and that’s great.”

It may not seem like a whole lot to the casual observer, but a dude like Kwame standing up for himself (especially on this team) can go a long way to helping him shed the dreaded “soft” label.