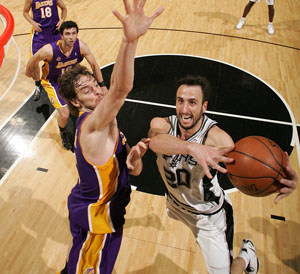 First things first, everyone expected the Lakers to lose this game, including the Lakers. It showed as they watched Manu and Duncan’s unorthodox attempts fall through the rim with a rally killing regularity. It showed in a lackadaisical defensive effort and it definitely showed in the post game press scrum. Whether this was merely a healthy respect for a defending champion or the first signs of complacency is indeterminable, but if the Lakers take the floor with the same attitude tomorrow night, they will be in trouble of losing not only the game but the series. San Antonio is a team that gets stronger as a series goes along and if they win Game Four in a similar fashion then they will have the psychological edge going back to Los Angeles. That is when inexperience and veteran savvy will reveal itself. But let’s not get ahead of ourselves.

* And let’s also stop with the “The Spurs are telling themselves that they should be up 2-1” nonsense. By that same measure the Lakers should be telling themselves that they should be up 3-0. They came back from down twenty once, why couldn’t they do it again? I’d like to think that these are two teams who recognize each others strengths and draw from the past purely for strategic purposes and not for inspiration.

* Kobe knew firsthand the intensity the Spurs would show from the tip ( ) and tried to match it bucket for bucket. Whether he should have opened the contest with the same gameplan as Game One is a up for debate, but it appears that his teammates were struggling to find a rhythm and the Lakers could not afford to fall too far behind on the road. This led to Kobe taking some quick-and questionable-threes that he may have found necessary to extend the defense and inspire his cohorts. So did Manu. But Manu made his, so by effect, they were better shots. That’s the way the cookie crumbles. However before anyone else starts uttering comparisons of Ginobli to Kobe or LeBron, lets agree that they would be proven to be laughable once we had them guard each other. Which may eventually have to happen in this series for L.A.

* Regardless, Manu treated the wing like the high corner in Double Dribble, he got there and it was automatic. The Lakers finally chased him off of that spot only to send him straight to the line on his unpredictable drives. As his combined 5-21 performance in the previous two games, I don’t expect his hot shooting to become a trend either, but if it does….

* Kobe has had a noticeable improvement in personnel, just ask Phil Jackson. Kwame was a “pussy”, but Pau Gasol is only a “weenie”. Or least he takes “weenie shots”. With limited exposure to Pau Gasol pre-purple and gold, I didn’t know who to believe about his reputation for soft play but I did know that this series would be an appropriate measuring stick. He’s come up short. Bombarded by lobs from Kobe in Game One, Duncan is no longer showing on Bryant’s drives and that has taken away easy opportunities for Pau, the only kind he’s been able to convert in this series. Duncan pwns him through intimidating Pau into those “weenie shots” with his length, strength and agility. Then he goes down to the other block and punishes him on offense with his footwork and recognition, knowing he can get any shot he wants. In order for Gasol to be effective he needs to reestablish the two-man game between himself and Lamar Odom.

* Who knew that Robert Horry would be a game changer in the Western Conference Finals with consistent defense? He’s not even looking for scoring opportunities, he’s just out there to fluster Odom. And it’s working. As stale as the Spurs Lucky Charm may be, he’s still big enough to keep Lamar from getting around him or posting him up. Odom has wonderful ball handling skills in the open court, but in one on one situations it’s noticeably weaker in the half court. He’s not going to floss the ball between his legs like Kobe or pirouette through the paint like Parker, he’s best suited in this situation attacking the basket as a cutter in a position to finish or dish. Instead he settled for long jumpers early in the shot clock, attempted impossible drives over outstretched defenders, mishandled the ball and was occasionally sabotaged by his own teammates inattention. Oh, and as usual he missed more than his fair share of free throws. This shrunk his confidence to the point where he was missing easy putbacks and finishes.

* How can they fix this? Put the ball is Gasol’s hands and play some effin defense. Again, the Spurs are a disciplined team and will allow the Lakers to launch twenty footers all night. Pau needs to assert himself and show some counter moves rather than tossing up quick jumpers and hooks. Establish deeper position, try and draw some early fouls on Duncan to quell his defensive aggression. There were few fast breaks in this game for L.A. since San An didn’t miss or turn the ball over, but the limited breaks the Lakers ran were successful, particularly for Gasol, a mobile big man in the open court. As the axiom goes, defense creates offense

* The Spurs legendary defensive droughts seem to be caused by Parker and Ginobili being neutered by stagnant half court play. Their end-to-end speed, ballhandling and creativity are best suited for fast breaks, which are limited if they’re struggling on defense and are occasionally corralled as to not run Duncan or their aging bench out of the game. It’s a delicate balance of three exceptional players with little support. They need to maintain an even keel in order to truly makes this a series tomorrow.